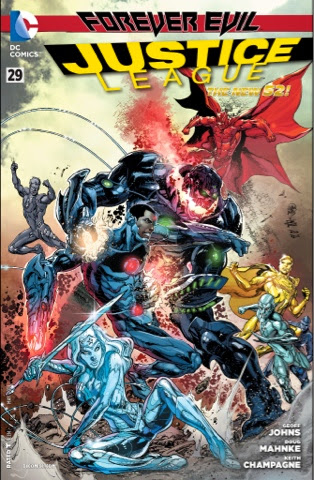 When DC launched in 2011 Justice League was the first title off the blocks. Now here's the 29th issue as the rest of the original New 52 survivors are about to hit #31. That's what being knee-deep in crossovers gets you.

Never mind, #29 is here, and with it the new Metal Men's battle against the Grid creature coordinating the Crime Syndicate's takeover of Earth. They do pretty well, especially when, perhaps too conveniently, the technically brainless bunch face a bunch of mostly telepathic villains.

Cyborg, meanwhile, confronts the Grid, his former body taken over by a sentient computer virus. It's a bit of a cliche that they wind up battling on a digital plane, but the encounter does give Vic Stone his best showcase since he was catapulted into League membership with #1. 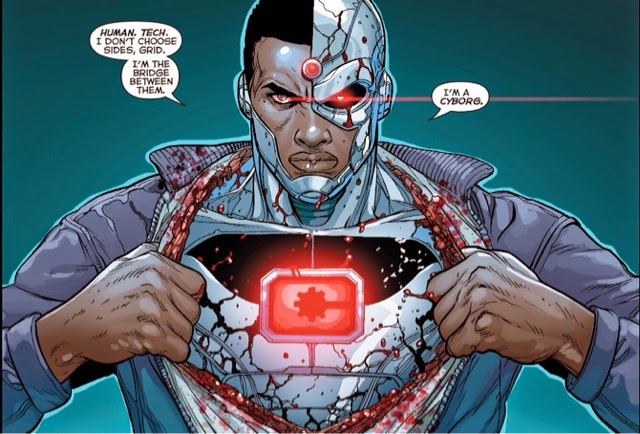 The revamped Metal Men are getting there in terms of personalities, but I die a little every time I see their new looks - they're so darn lumpy. Yeah, the Silver Age designs are half a century old, but you know what? The Mona Lisa is centuries old, and no one's demanding an update on that. I'm exaggerating for effect, obviously, but there's a reason Ross Andru and Mike Esposito's sleek designs lasted for decades - they're perfect for the characters in terms of personality and purpose. Every bit of tinkering - this isn't the first time they've been tweaked, but it's the biggest redesign we've seen - wrecks the Metal Men a little more. 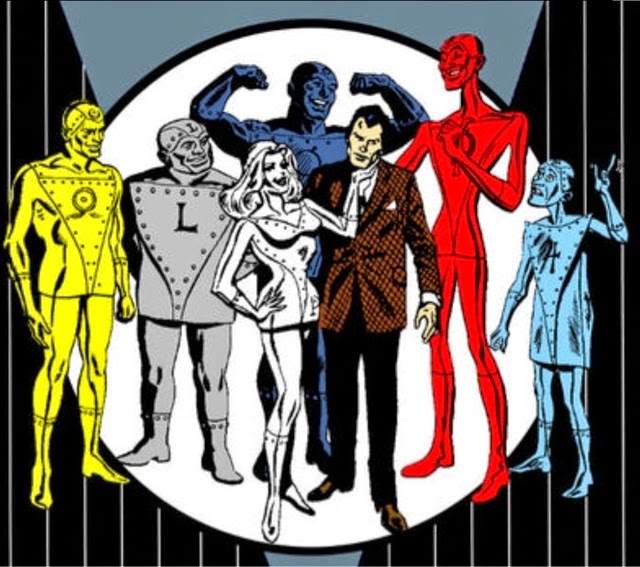 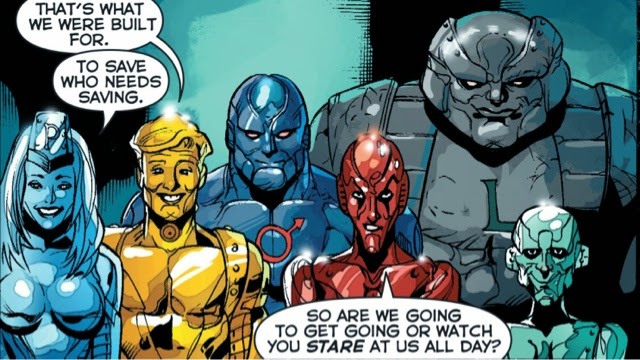 Honestly, does anyone think the latest look has the simple style of the old versions, the functionality, charisma, charm?

And as for the now-teenage Doc Magnus, Johns writes him as far too touchy feely - he should love his robots (not 'androids'!) but not in a madly demonstrative way. And give him his pipe back, for goodness sake! 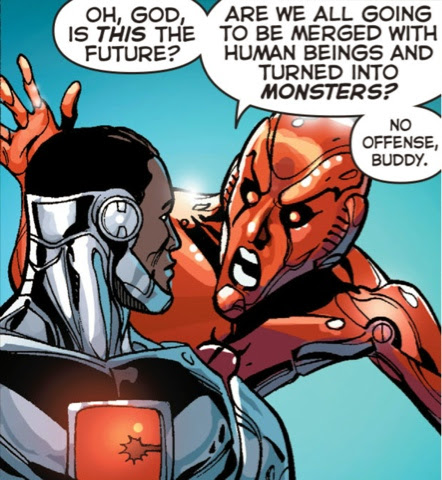 There are some good moments from Johns, I like that the Metal Men are unambiguous good guys, he writes the melodramatically amusing Mercury especially well, and it's good to finally see some movement on this Forever Evil crossover. The arrival of Steve Trevor and Killer Frost is appreciated, hopefully giving a boost to the excellent, just-finished Forever Evil: ARGUS mini-series. It's rather boring that the Grid has the same Pinocchio complex as every other robot in fiction, as he seemed to be set up to go the other way. I'd rather have the Grid defeated via some less-obvious Achilles' heel.

Penciller Doug Mahnke produces first-rate superhero art, inked by Christian Alamy and Keith Champagne. While I don't like the character redesigns, they do well with what they've been given - Will is nicely animated, Cyborg is strong and resolute, and the action moments look great. Courtesy of colourist Rod Reis we get some great rain as he keep the pages popping. And Dezi Sienty's lettering is as sharp as ever.

I see the thematic idea behind Ivan Reis, Joe Prado and Rod Reis's cover, but I'd prefer the Metal Men to be the Metal Men. And why is Platinum/Wonder Woman having a little sit down?

Overall, a very competent comic, keeping the wheels spinning, hitting the requisite storyline beats ... but surely the series that was meant to lead the DC line should be something more? I appreciate the world building (though Happy Harbor' residents won't) and reintroduction of versions of the Metal Men and, earlier, Doom Patrol, but I'm not wowed. There are no amazing moments, no original ideas. I'd love to see a writer such as Mighty Avengers' Al Ewing have a crack at this book, as he's a whiz at finding fresh things to do with vintage properties, combining characterisations and power sets to unexpected effect.

Right now, though, I'd be happy for Forever Evil to be done. And Cyborg seems to agree.