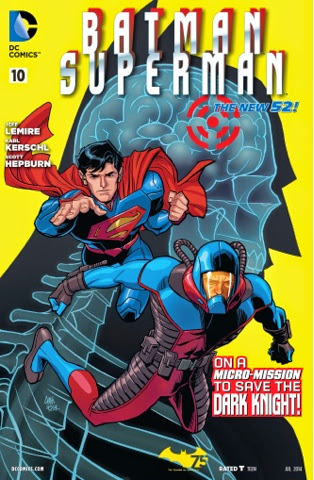 Superman and Ray Palmer must shrink down into the Batman's body when a microscopic alien presence puts him in a coma.

We've all seen the Fantastic Voyage bit transposed to comics. Writer Jeff Lemire avoids the usual 'we're being attacked by blood cells' cliches by going the other route for an Atom story - having it take place in a hidden world.

Not that it's THE Atom, as Ray Palmer isn't a superhero at the start of this story - he's the shrinking scientist for super-spy organisation SHADE. But he does don a version of the classic red and blue outfit and he's equipped with all kinds of miniaturising tech which, while providing rather the deus ex machina, allows for the odd nice gag. 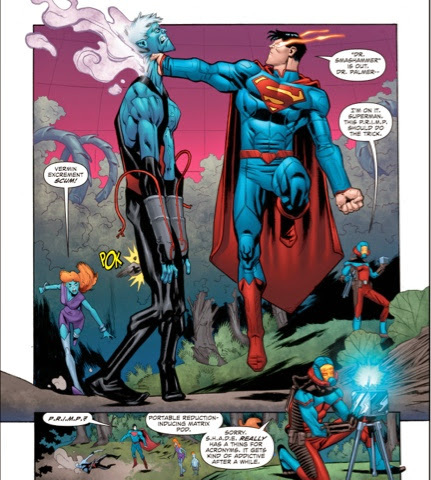 And in a cute nod to one of the best-remembered Atom runs, he also gets to swing a sword.

Superman is rather overshadowed by Ray's antics, but as this issue does turn out to be the scientist's debut as a superhero - yep, by the end he takes on the Atom name - I can live with it. I'm less happy with how brusque Superman is with Ray, though.

As for Batman, he is, unsurprisingly, not an active participant until late in the day, but once Lemire brings him into play, he's good fun.

The reactions of Superman and Batman, when Ray announces he'll be known as the Atom, make sense given the Earth 3 Atom who just infiltrated the Justice League, but I'm delighted Ray has reclaimed his traditional name.

Another point in this story's favour is that it reminds us about SHADE's shadiness, their habit of spying on as many superheroes as they can. It could make for some decent tales down the line ... but I'm still disturbed that head spook Father Time is now in the body of a cheeky little schoolgirl.

The art chores are shared by Karl Kerschl and Scott Hepburn and the book looks pretty decent, with a softer feel than most of the New 52 line; it's attractive and suits a story as unashamedly daft as this one. I like such touches as the old school 'surprise flashes' over our heroes' heads, courtesy of Hepburn. The only problem is Superman's special shrinking suit disappearing once he enters the microverse after the first artistic handover. I know I'm always harping on about proofreading, but Editors Rickey Purdin and Eddie Berganza should really have had sorted that one out.

Gabe Eltaeb's colour choices are generally fine, though shading a lumbering brute with a Mohawk blue makes bad guy Titan Super Gladiator (there's a reason for the naff name) look rather too OMAC.  Letterer Rob Leigh, meanwhile, gets the script on the page with pizzazz, and Cameron Stewart provides a terrific cover illo.

All in all, a fun done-in-one which puts an iconic DC character back on the superhero stage while setting SHADE up for an ongoing role as irritant-in-chief to the metahuman community.  $3.99 for a 22pp book remains terrible 'value' compared to the usual $2.99 for 20pp, but if your budget isn't shrinking, catch the Atom.
Batman/Superman #10 review Cameron Stewart Gabe Eltaeb Jeff Lemire Karl Kerschl Rob Leigh Scott Hepburn the Atom