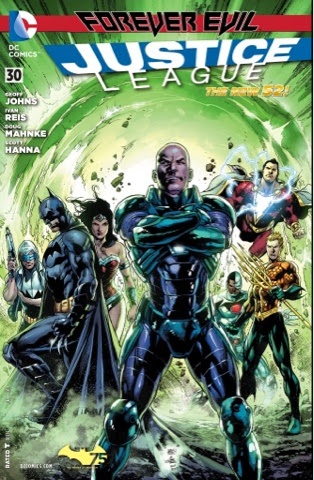 'Lex Luthor saves the world'. That's the Daily Planet headline following the routing of the Crime Syndicate. The Justice League's stock has fallen in the public eye, so should they accept the newly feted Lex Luthor's request to allow him to join? As he says, he is now one of the world's greatest superheroes. He's even willing to allow Wonder Woman to interrogate him with the Lasso of Truth. The answers aren't flattering - he admits to being an egomaniac - but he seems sincere. He wants to join the League to protect the world from the big threat that's coming, the creature - assumed to be Darkseid - who destroyed Earth 3.

Superman isn't having it, which disappoints the other potential member Luthor has brought to the JL satellite he's reconstructed - Shazam. Goodness, it's almost as if Luthor sees himself being initially rejected, reconsidered, initiated, Superman walking out and a replacement being needed.

There's a lot to like about this issue. The Luthor business is playing out a lot better in Geoff Johns' script than I expected, with his League ambitions set to cause entertaining fireworks for - hopefully - just a short time. Superman's refusal to even consider Luthor might be on a better path makes sense, as the hero who's suffered most under him, and seen him for the ruthless, murderous manipulator he is - of course Luthor can put the best spin on a lasso session. Shazam is the Captain Marvel of the late Eighties, a goofy naive kid in adult form rather than the super-yobbo of his recent origin series - right down to some very Kevin Maguire facial expressions.

There are some pleasingly funny moments, from the Flash kidding Batman to Cocktail King Luthor, elevating this issue above the grimness of Forever Evil. And I grinned from ear to ear at Jake Shell, parole officer to the Flash Rogues - tough gig - who heralds Captain Cold's upcoming League stint.

Luthor may think he's the world's smartest man, but he seems not to have noticed his own outfit here:

I'm intrigued by the shadowy Doom Patrol, led by a very grumpy - and ambulent - Chief. Expect a big rock to fall on him soon.

The art is excellent, with Ivan Reiss and Doug Mahnke penciling, and inker Scott Hanna lending consistency with his sharp lines. There are great moments throughout, with equal attention paid to the acting and action. And Jimmy Olsen looks very cool in a hat. Rod Reis' colours are typically vibrant, while Dezi Sienty's lettering is spot-on.

I'm less interested by the debut of yet another Green Lantern character, heir to the Earth 3 eeeeevil ring. How long before Jessica Cruz joins Simon Baz in limbo? 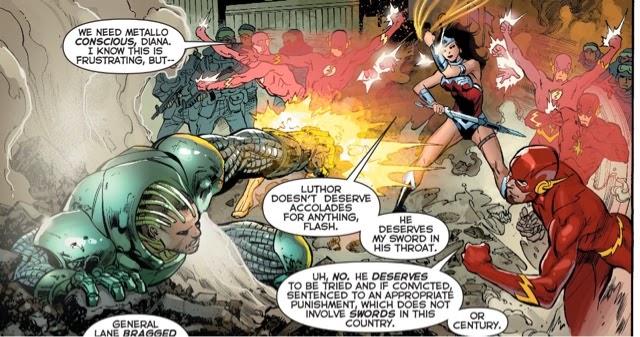 And I out and out hate the portrayal of Wonder Woman as bloodthirsty barbarian - she's actually sweating blood as she near-slaughters Metallo. At least Barry Allen challenges her behaviour so perhaps Geoff Johns is finally going to move Diana on to match the more interesting character slowly emerging elsewhere in the DC Universe.

What annoyed me about this issue is that there's not a single word about the two members of the League who failed to emerge from Firestorm's headspace in Forever Evil #7. Not one member is shown to give a hoot about the missing pair. Now if Luthor finds them, he'll get my vote ...
Forever Evil Justice League #7 review Luthor Metallo