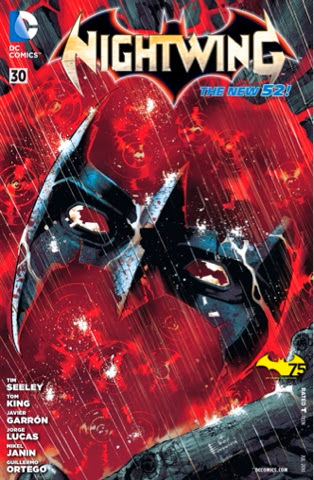 Well, that was horrible.

It's the final issue of Nightwing, but not really. In the 'grand' tradition of Justice League United #0 being #1 by any other name, this is actually Grayson #1, or #0 if we have to be all Marketing about it. Yes, we see exchanges between Nightwing and Batman about what Dick's going to do now the world thinks he's dead at the hands of the Crime Syndicate, but the characters and events of the last few issues are ignored. There are flashbacks, but not to anything from the previous 29 instalments - this issue is all about moving forward. 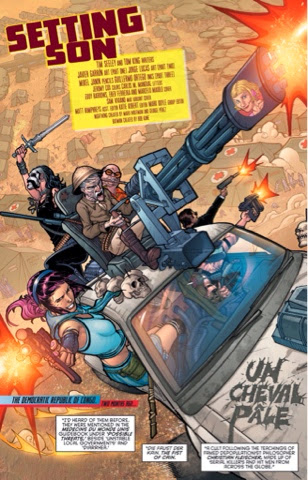 We open with Dr Leslie Thompkins telling Batman of a chilling encounter with a gang of assassins while she was ministering to poor children in the Congo a couple of months previously. She was rescued by mysterious organisation Spyral, but fears she's given up his secrets while drugged by them.

In Wayne Manor, Alfred is almost a broken man, having lost Damian and Dick in quick succession. The lift to the Batcave is broken, apparently accidentally, so he can't get down to the Batcave. Below the manor, Batman challenges Nightwing to prove he still has what it takes to continue in the crimefighting game, having 'allowed' himself to be captured and brutalised. 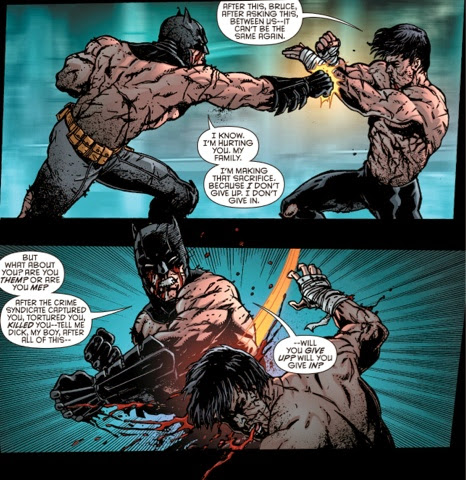 They fight. Boy, do they fight - and that's not a good 'boy'. Because this is one of the most horrible back and forths I've seen in a DC comic, with Dick 'winning' but winding up covered in blood and cuts. Being thrown into a glass case containing a Robin costume - how subtle - without your usual body armour will do that to you. Bruce is in a similar state, but Dick's win isn't convincing, it's more as if Bruce has made his point and allowed the fight to finish.

And the point? That yes, Dick still has what it takes, and is up to taking on a tough assignment if he agrees. All he has to do is infiltrate Spyral to see what they know, allowing all his friends - Barbara, Jim Gordon, Tim and the rest - to keep thinking he's dead. Alfred, Bruce lets know by the close of the sequence. What a kind chap.

And a page or three later, he's beginning his new mission, running around the world foiling members of Die Faust Der Kain - the Fist of Cain, the guys who murdered a village in the opening pages. And wouldn't you know it, he soon attracts the attention of an agent of Spyral who's not named but whose mini-crossbow, cross shirt and publicity interviews tell us is Helena Bertinelli, the Huntress of the last DCU continuity. And she's now black, bra-less and in a gimp mask because, well, DC New 52. 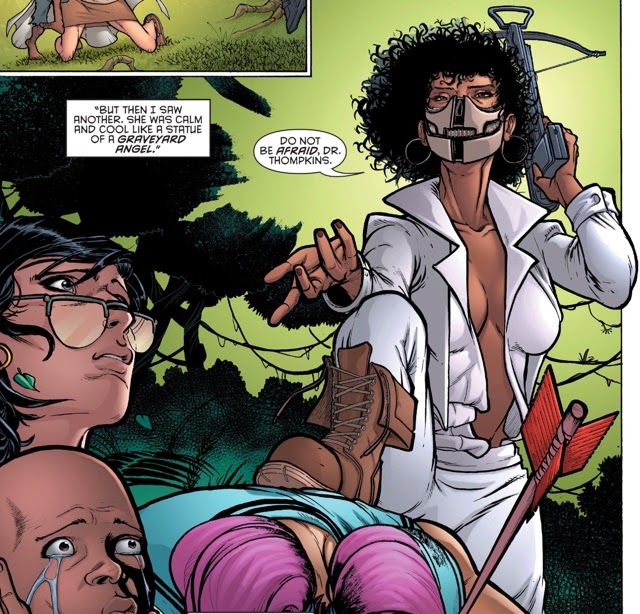 This comic is incredibly frustrating - so much creative talent from the artists, imagination on the part of the writers obvious, and what do we get? Innocents slaughtered in front of us by blade-wielding thugs. A superhero beating up one of his two most-trusted allies rather than sit down over a cup of Alfred's tea and laying out options. That same Batman verbally Nightwing because he happened to get captured by villains far above his power level - like that's never happened to him. Alfred, cruelly kept out of the loop until Dick had agreed to Bruce's stupid mission.

Stupid? Yeah, really stupid. Batman has already encountered Spyral in the pages of Batman Incorporated. They obviously know plenty about him, almost certainly his secret identity. And they're not using the information against him, supposedly they're out for justice too, but walking a different route. If they don't know the guy who shows up on their doorstep with Dick Grayson's face is Nightwing, recently exposed on worldwide TV, they'll put two and two together pretty quickly. As it is, the-woman-who-has-to-be-Helena calls Dick 'Nightwing' as soon as she meets him, and offers him a mission.

So we have to take it that rather than simply contact Spyral, ask what they know, what they want, and come to an accommodation, Batman would put Dick in an awful lot of danger and allow good people to mourn needlessly?

If DC really wants Dick to be a super-spy, there have to be more convincing set-ups than this. As it is, Nightwing's not the biggest dick in this issue, it's the Batman. A few years' back Batman would occasionally be presented as so intense as to be cruel to his friends, and I was happy to see the back of that presentation. But here he is again, worse even, so fixated on his mission, his priorities, that others are pawns, to be brutalised physically and emotionally into seeing things his way.

The issue is written by Tim Seeley and Tom King, and hangs together well structurally. It's the creative decisions with which I disagree - perhaps the actual Grayson book will be more palatable, but given their apparent love of carnage, and willingness to buy into the most twisted version of Batman family dynamics, I doubt it. Their final lines, after Dick ruminates on his history and roles, are: 'My name is Dick Grayson. I'm whoever you need me to be.'

And there I thought Dick was the boy hero who grew up to be his own man, made his own decisions. Here he's simply the plaything of the Bat, his own identity subsumed  to the Mission.

The book has four artists, two doing full illustrations for their chapters, while a penciller and inker complete the issue. The Leslie Thompkins sequence with which we begin looks superb, with the splash being a tremendously fun, dynamic image. I wish Javier Garron, who has an elegant line and a real talent for character design, wasn't then tasked with drawing aid workers being murdered as terrified, sick kids look on.

Jorge Lucas can't tap into the vein of whimsy Garron does in that first moment, as the Batcave sequence is sadness and cruelty all the way. He has ability, and does what's asked of him, and may have enjoyed choreographing the fight, but I can barely look at the pages, so-off kilter is the characterisation. 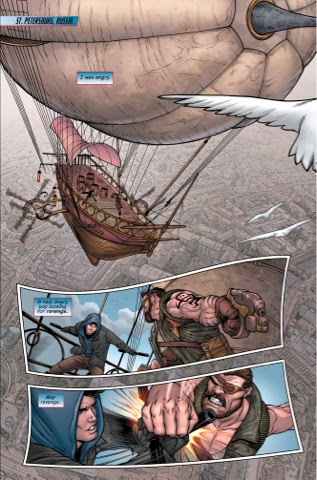 Mikel Janin, who has given us nearly three years of fantastic Justice League Dark art, has jumped ship to be the Grayson artist. Literally, in this chapter, as Dick fights aboard a flying pirate ship over St Petersburg. He also takes Dick to Tokyo, Amman and Kampala, and the art is clean and open and dynamic - just what I'd love to see in a Nightwing comic. I'm less sure I'll enjoy the globe-spanning, high adventure dramatics in Grayson if they come with a side of slaughter. But Janin's sequence, inked by Guillermo Ortego, is the best advert for a Grayson book yet, and it's a shame getting here is such a narrative slog.

Jeromy Cox colours, Carlos M Mangual letters, and both turn in their usual excellent work. Cox seems to relish being asked to hit the various mood notes required by the script's emotions and locations.

The cover by Eddy Barrows, Eber Ferreira and Marcelo Maiolo is a weird one. It's Dick's mask, lying in a pool of blood - again, because DC New 52 - and it looks for all the world like it's selling a Batwoman book.

So, this comic is a terrible way to end the Nightwing series. It's a terrible way to begin Grayson. I'll give Grayson #1 a look - half out of morbid curiosity, half for my liking for Janin - but it's on a very short lead.
Carlos M Mangual Eber Ferreira Eddy Barrows Guillermo Ortego Javier Garron Jeromy Cox Jorge Lucas Marcelo Maiolo Mikel Janin Tim Seeley Tom King