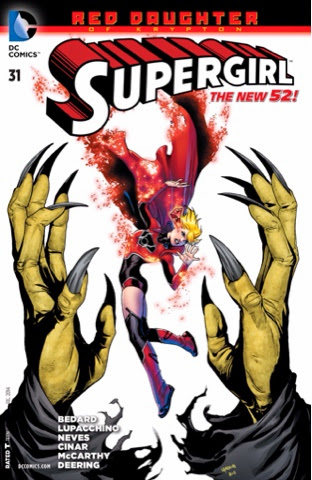 Supergirl is no longer the newest Red Lantern. As this issue opens she's accompanying Guy Gardner and co as they try to track down the newcomer, hoping to recruit her before rival Atrocitus. She finally finds the latest Lantern, whose confusion and background has her manifesting her red energy to judge every citizen of the planet Primeen. Lethally.

Kara tries to convince the Judge to calm down, but becomes the latest victim of her psychic probing. Seeing Kara's angry recent past, she rules Supergirl must die like the rest of Krypton. The Judge is about to implement sentence when a guardian angel springs forth from Kara's consciousness - a projection of her late mother, Alura. This alarms the Judge, changes the way she sees things; she pronounces that Kara will live.

She's confused by the appearance of Alura, but Kara composes herself and takes advantage of the Judge giving her the benefit of the doubt. She explains that the Red Lanterns' spaceship has a supply of the Ysmault blood which, when bathed in, clears the addled mind of a new ring bearer.

As Kara flies away to get the liquid, Atrocitus and cat sidekick Dex-Starr, who have also been scouring the planet, spot the Judge.

Back on Earth, meanwhile, the demon Blaze arrives at Kara's former New York apartment, looking for 'Super-girl' and puts the willies up Siobhan's new flatmate, Alexa, and her creepy cronies. And in the outer solar system, a Worldkiller is heading for Earth in search of ... you guessed it!

Well, someone's going to have her hands full when her time as a Red Lantern is over. And I think that day is coming sooner rather than later, given how quickly writer Tony Bedard is progressing Kara's personality. Here she is in the Oan corps characterised by rage, and showing smarts, empathy, appealing to reason and always trying to contain her anger. She's a nicer, more reflective, effective Supergirl than she's been for most of this comic's run. Which is weird, but a welcome improvement.

There isn't much Kara in the first half of this issue, but as we're crossing over with the Red Lanterns series, that's forgiveable. Bedard doesn't write the corps quite as entertainingly as their own handler, Charles Soule, but then, Soule doesn't write such a fantastic Kara. Both writers present their guests well enough while showcasing their stars and furthering their own storylines.

One thing I really like this issue is the tiny reference to her cousin Superman. 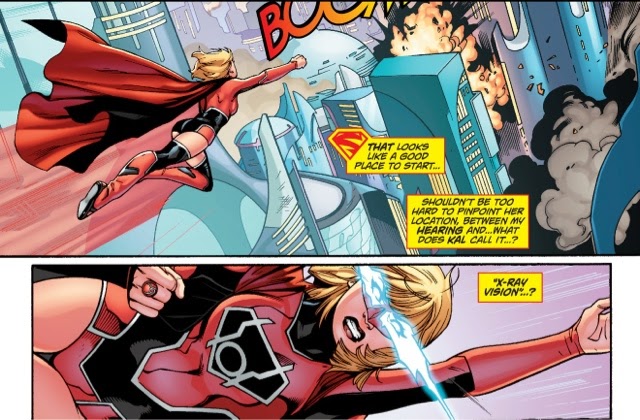 She picks up on his experience, thinks of him with no spite, no resentment. Sad as it is, I think that's a first for this comic. Until Supergirl and Superman are close friends again, this new DC Universe has a hole at its centre. I hope Bedard will address this fully once Kara's back in the red and blue.

The business with Alura is certainly unexpected. I'm trying to recall, did we actually see her die with Argo City, or could she be in some Silver Age-style 'Survival Zone linked to Kara's consciousness? I certainly don't want to buy the Judge's summation that Alura represents 'the brightest facet' of Kara's identity - Supergirl should be sunny, yes, but that quality should be an innate part of her, not something she's borrowing from her frankly crabby ma. This other comment from the Judge is more my cup of tea. 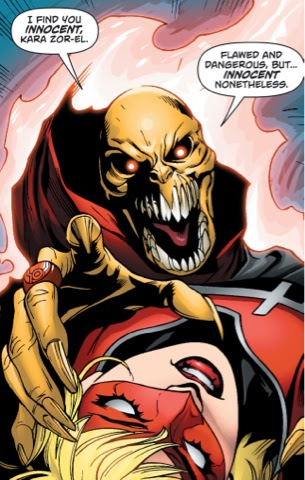 Innocent? Surely that should be Not Guilty? But In a sense Kara is innocent, in the ways of the universe - there's so much she doesn't get, but in the past, rather than trying to understand, she lashed out. I hope this behaviour is behind her. I trust Bedard, and DC would be daft not to let him build Kara up, make her the heroine she should be. And innocence is one facet of that, along with courage, love, optimism, strength - the good stuff. She can still have faults we can relate to, but they shouldn't overshadow what makes Kara admirable.

The art is a treat. Most pages - Kara on Primeen in the now - are the work of Emanuela Lupaccino, including this fantastic splash which is inked by Ray McCarthy. 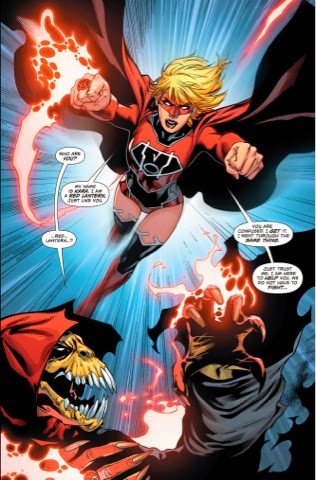 There's a certain majesty to Kara here, and I hope this quality carries over when the current arc is done. Lupaccino's compositions and characters, as finished by the precise lines of McCarthy, appeal hugely.

And then there's Yildiray Cinar, who handles the vision sequence, colouring as well as illustrating, and wow! 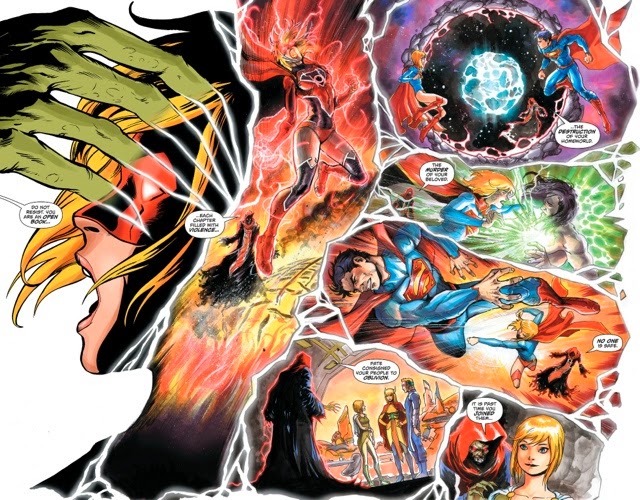 I love the imaginative layout, and the softer colours, the contrast with the rest of the book works brilliantly.

The New York scene and final page are down to Cory Smith, and work well, and if I'm understanding the credits, one of Lupaccino's pages is inked by Guillermo Ortego. Whew! By all accounts this book should be a mess, but instead of a mish-mash, it's a smash. Credit, too, should go to Hi-Fi, who colour everything bar the Cinar pages, finding a keen balance between bright and moody. And Rob Leigh knits the script into the art with his sharp lettering.