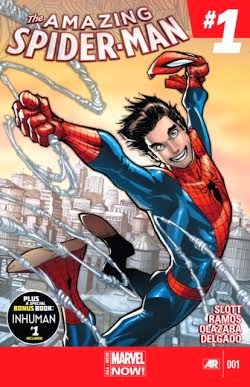 It took six issues for the mainstream Marvel Universe to cobble together an African American Nick Fury to match movie version Samuel L Jackson. So how long to make white super-villain Electro darker skinned in the hope that (drunk) Amazing Spider-Man 2 fans will think they're looking at Jamie Foxx?

It's a lumpen, arguably crass move, but you can't deny writers Dan Slott & Christos Gage and artist Javier Rodriguez combine craft with economy. Because 'Recapturing that old spark' is a decent little tale in this giant-size celebration of Peter Parker's return, as Max Dillon tries to show the younger generation of bad guys that he's a player. The grand plan is to use his electrical abilities to free the inmates of a prison, but he releases a blast so big he injures himself, charring his skin. Why, you'd never know he was ever a white guy!

The super-lucky Black Cat is the only prisoner who escapes when a massive blast of electricity hits the jail she's been sent to after a brutal beating by the Superior Spider-Man. The captions in 'Crossed paths' have this happening 'months ago' whereas the preceding Electro short is tagged as occurring a couple of days back, but it makes sense that this is the same incident.

It's Slott and Gage behind the keyboard again, with Giuseppe Camuncoli pencilling a story showing us the less literal darkening of Felicia Hardy.
Spider-Man's enemy with benefits no more, she's understandably embittered at the treatment she's had from her occasional partner in adventure. She has no idea that it wasn't 'her' Spidey who savagely beat her, all she wants is revenge. This is a tremendous vignette, plausibly explaining what would otherwise be a sudden change in the Black Cat's character as she goes from friendly neighbourhood jewel thief to would be hero-killer.

The mood is lightened by 'How my stuff works', a pithy, amusing three-pager detailing Spidey's powers and situation, courtesy of writer Joe Caramagna and artist Chris Eliopoulos.

'Homecoming ... sort of' is a beautifully illustrated Spider-Man 2099 strip aiming to grab readers for his upcoming solo series. It didn't grab me, but it's entertaining enough work from writer Peter David and artist Will Sliney, who draws the most-stylish muggers around.

There's another illustrated ad in the shape of 'Kaine' as writer Chris Yost reminds readers that one of the several Peter Parker clones is back and hanging around the new New Warriors series, not coincidentally written by Chris Yost. The stretching-it premise of this short is that the original Peter has travelled to Texas to check up on his 'brother'. He's surprised by what he finds in another totally missable story, this one with the artistic imprint of the talented David Baldeon and Jordi Tarragona. 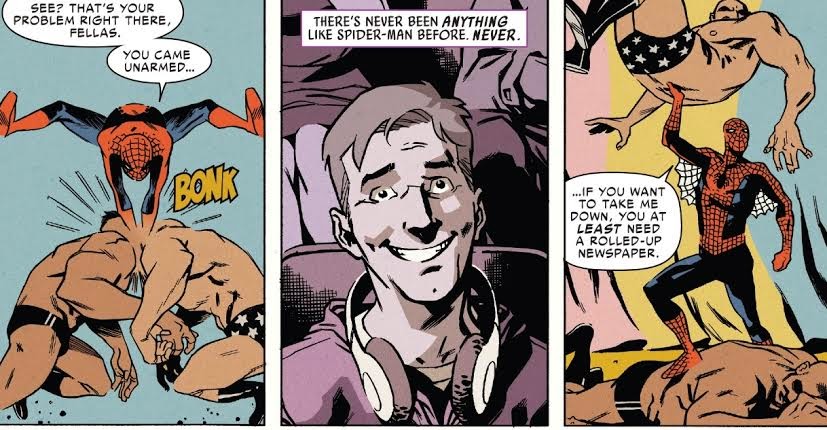 This State of the Spider-Verse/Buy Our Books issue closes with 'Amazing Reality' (see what they did there?) as we meet the high schooler about to be retconned into position as Spider-Man's first costumed foe in Year One-style spin-off book Amazing Spider-Man #1.1. Dan Slott takes us back to Peter Parker's brief stint as a wrestler and adds a wrinkle to the Burglar business that I rather like. I believe the new guy, Clayton Cole, will also be showing up in present day Spidey stories. He gets a good kick-off here via the sharp script of Slott, attractive illustrations of Ramon Perez and smart colour palette of Ian Herring. 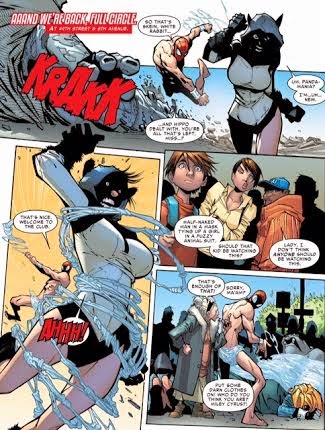 And the issue's main event, Peter Parker's first day back after months of being kindasortadead? 'Lucky to be alive' is a hugely enjoyable effort by Slott, penciller Humberto Ramos and inker Victor Olazaba. The only downer is a prologue in which we see that the old radioactive spider didn't only bite Peter in its dying moments, because, well, there aren't enough Spider-Man derivatives around. Expect She-Spider Silk to slink along soon.

For now, we can make do with Skein, former Gypsy Moth, ex-Thunderbolt and founder member of the cutest supervillain team ever, the Menagerie. She's not so much a web-spinner as a thread-unspinner, ensuring that although Peter's back in costume, he's not in costume for long. I'm not a Ramos fan - his Spidey poses are usually several contortions too far for my liking - but he really nails the comedy here. What's more, I found myself loving the way Ramos works the cast, giving them character and animation.

Slott, as ever, adds personality plus and while I know Otto Octavius grew a fanbase, I couldn't be happier to have his Peter back. Watching Peter trying to figure out the life Doc Ock has bequeathed him is a hoot, as is Spidey's tussle with Skein and colleagues White Rabbit, Hippo and - blimey - Pandamania.

I could do without the fashionable in media res opening - this isn't TV, we've bought the comic, we're committed. It took so long to catch up to the start of the issue after the 'preview' scene that I completely forgot we were in flashback mode, and got thrown out of the book for a moment or two.

Other than that and the prologue, I've no complaints. Slott, Ramos and the rest of the team provide a high-octane, highly entertaining day-in-the-life issue, showing not just the reactions of Peter to his new circumstances - suddenly he has a PhD and owns a research company - but of New Yorkers to a more familiar-acting Spider-Man ... not superior, simply amazing. It's another brand new day, but one without the bad taste of last time.

With the original Spider-Man back in costume, but elements of his surprisingly popular usurper's life continuing - such as the presence of Otto's girlfriend Anna Maria - this title has a chance of pleasing both Peter and Otto fans. And if subsequent issues are as good as this, I think it's going to succeed.
Chris Eliopoulos Chris Yost Christos Gage Dan Slott David Baldeon Giuseppe Camuncoli Humberto Ramos Javier Rodriguez Joe Caramagna Jordi Tarragona Peter David Ramon Perez Victor Olazaba Will Sliney