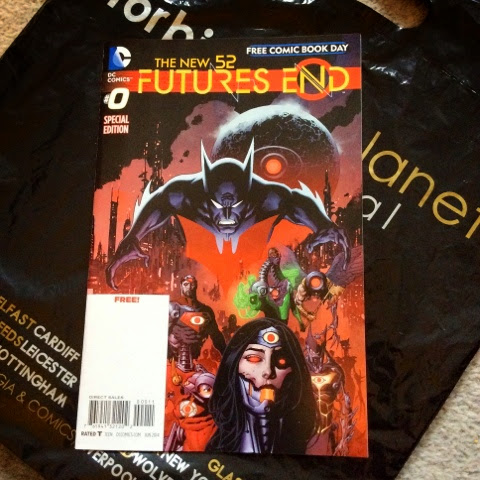 It's 2049 and Earth is overrun by the robotic hordes of Brother Eye, the human populace in chains. A few heroes remain free, working to down the satellite controlling the super-heroes turned by having the 'eye-seed' planted within them. Batman, who bears some responsibility for the situation, takes one last, desperate throw of the dice - a time trip to 2014 to prevent the rise of Brother Eye.

How can you stop the future happening when it's already started? That's the question at the heart of DC's new weekly series, the latest attempt to repeat the success of 52. Like the 2006 hit, it has a group of writers plotting out the actions and a pool of artists to bring the story to life, with artist/writer Keith Giffen's breakdowns lending a visual unity to the venture.

And like 52, Future's End grabs me immediately. Which is surprising, as I'm not a big fan of dystopian futures. Brother Eye stories have been done to death by DC over the last decade. And as for tales in which heroes journey into the past to prevent said dark future, the trope is so tired that a book has to have something extra to impress me.

What this Free Comic Book Day zero issue has is confidence and creepiness. From first to last page, it's evident the writers - Brian Azzarello, Dan Jurgens, Jeff Lemire and the aforementioned Giffen - know where they're going. And they're not shy of shocking along the way. Wonder Woman's torso atop a cyber-spider is a horrible image. The Batman ripped apart by the agents of Brother Eye is deeply unpleasant. But what really sticks with me after the set-up chapter is this image: Many a time I've sighed over the darkness of DC's modern superhero comics, replete with gory deaths and gratuitous maiming. And while Future's End #0 has killing and limb loss, the incidents don't feel over the top. The context - a world at war - helps, and I like that it's not a world without hope; Amethyst, Grifter, Captain Cold, a tragically bearded Flash, all still fighting the good fight in the face of apparently overwhelming odds.

It also helps that I don't have the same attachment to the current versions of Flash, Black Canary and co as I did to the pre-Flashpoint characters. Which may be me admitting defeat.

Still, who knows, if Future's End - which after this issue is set five years from today - has the odd death, the rest of the line may lighten up a tad.

A reviewer can dream ...

It's probably silly wondering about details in a deliberately bombastic, apocalyptic opener, but I do question how Blue Beetle Jaime Reyes is so easily absorbed by Brother Eye's cyber-army - he already hosts an alien parasite which would surely put up some form of resistance.

The credits don't give breakdowns, but it seems we have all the upcoming art teams contributing - Aaron Lopresti & Art Thibert, Dan Jurgens & Mark Irwin, Jesus Merino & Dan Green, and solo acts Patrick Zircher and Ethan Van Sciver. Whatever the case, colourists Hi-Fi lend a consistency to the pages, with regular rich reds bringing a Crisis feel to proceedings. As well as the Black Canary scene, highlights include the last stand in the Batcave, and John Stewart's run-in with Superman.

And the cover by Ryan Sook is a fine proof of concept.