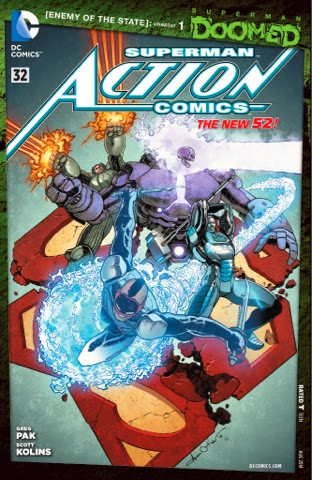 The Superman Doomed event enters a new stage this issue, with an Enemy of the State banner added to the cover. I'm not sure why the title needs a subtitle as the story continues without any obvious new starting point, but there you go. Inside, we get another title, Nightmare.

And that's what Superman hopes he's having at the beginning of this issue, but no, he's been infected with spores by the Doomsday beast and is changing into a monster himself. He's currently in a lucid period, sitting alone in a Chilean wasteland, worrying about the aura he's developing which poisons and kills living things around him. He's containing it by sheer force of will, but for how long?

Back in the US, Lois Lane tells TV audiences that Superman is a massive danger to the world. Which is true, but is sowing panic a good idea? Not that it's Lois' notion - she's under the control of Brainiac, as much a monster as Superman. Soon she's sweet-talking, then mentally influencing, newly revived villain Metallo - the man with the Kryptonite heart - into  accompanying military personnel on a Superman hunt.

Back in South America, Superman's steadfast ally Steel, in his newly tweaked armour, turns up, having been summoned by the Man of Steel. Superman gives him a mini-Phantom Zone projector in case he loses control of the aura, but reacts angrily when Steel suggests a stay on the moon, encased in liquid metal, until Earth's top scientists and heroes find a solution. 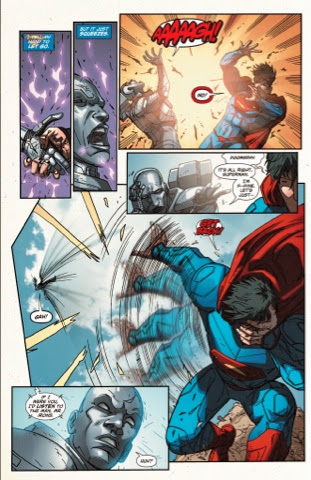 A scuffle breaks out, but Steel is calming Superman down when things get worse; heralded by a warning from self-proclaimed hero Lex Luthor, the military arrive, with a kill-crazy Metallo powering a flying tank carrying another of Superman's arch-enemies, the Atomic Skull. Steel advises Superman not to engage, as he faces off against Skull. Luthor, communicating by hologram, pleads with Superman to just get away. Superman, though, has other ideas ...

The final few pages show that while Superman is liable to permanently transform into a Doomsday, he's not the biggest monster around, leading to a rather dramatic cliffhanger.

Action Comics #32 features another excellent script from Greg Pak. As well as the main action with Superman, he gives us a great scene with Lana Lang and Wonder Woman encountering one another for the first time. It's a phone call rather than a face to face meeting, but one that makes me want to see these two hang out for real. 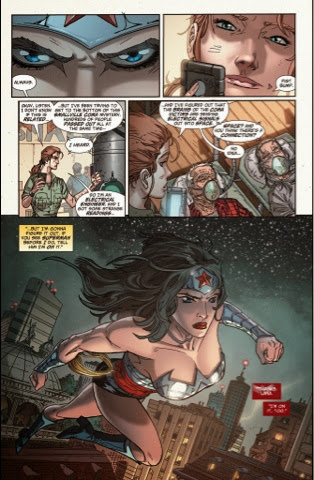 Lex Luthor's supposed rehabilitation as of Forever Evil is cleverly used to progress the Doomsday business, while Steel continues to be rebuilt into the hero he was in the Nineties ... and his invention facility gets a great acronym which - surprise, surprise - spells S.T.E.E.L.

The only problem I have with the script is Superman's clinging to Earth when he knows he could wind up killing millions. It's made clear that he's in control of his own mind for most of the issue, so why on Earth is he still on Earth? Why is he offering Steel a Phantom Zone projector, rather than just using the thing and instantly ending the threat to the planet he's supposed to love? Or asking the Green Lanterns to put him in a Science Cell? Begging Wonder Woman to seal him behind Doom's Doorway?

Splendid cover apart, regular artist Aaron Kuder is absent this month, but Scott Kolins does a fine job filling in. He might rethink Wonder Woman's chest (see above ... don't put your eyes out!) but then, a lot of current DC artists seem convinced she has fake boobs. More successful scenes include the Steel sequence, with the metallic man summarily dismissed by a super-spin, and the main part of the Lana/Diana phone chat. The storytelling is fine, the figurework admirable, throughout, which is unsurprising with an artist as experienced as Kolins.

Overall, it's another successful chapter in perhaps the best Superman story since the 2011 relaunch. Superman's unwillingness to accept exile is an awkward way to prolong the arc, but this story beat is likely a crossover committee thing rather than purely Pak's decision. So far as Superman Doomed is concerned, I'm still onboard, and still enthusiastic.
Aaron Kuder Action Comics #30 review Carlos M Mangual Greg Pak Scott Kolins Superman Doomed Wil Quintana