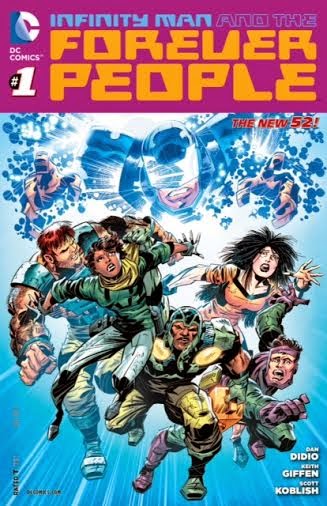 A quartet of graduates from an extra-dimensional academy are sent to Earth, to bring harmony to a world racked with conflict and disease. But dark forces from their homeland are waiting, and they won't be making things easy for the Forever People.

That's the idea behind this new series and it's a case of so far, so great. Keith Giffen and Dan DiDio reintroduce Jack Kirby's Seventies team in the revised DC Universe continuity, making the odd tweak to the line-up. So Serafin is now female, black and the sister of Vykin. I see the thinking - diversity and potential for different character dynamics - but boy, I'm missing the goofy space cowboy look. Who knows though, Serafina could always pick up a bullet-laden hat at her new home on Venice Beach.

I'm not a big fan of Kirby's Fourth World books (possibly because I've read only a handful) but I loved this comic from start to finish. The constant flow of barmy concepts and larger than life characters is certainly in line with the King's output; heck, Kirby himself becomes a supporting character of sorts, and a very appropriate one too.

As well as spunky Serafina and bad boy Vykin, there's rebel with a cause Mark Moonrider, the seemingly scatty Beautiful Dreamer (though it now seems to be Dreamer Beautiful, which misses the point - hopefully this is just letterer Travis Lanham having a 'moment') and my instant favourite, the sweet Big Bear. He's already on Earth when the young gods of New Genesis arrive via Boom Tube, ready to help the newcomers acclimatise and, hopefully, succeed in their mission. 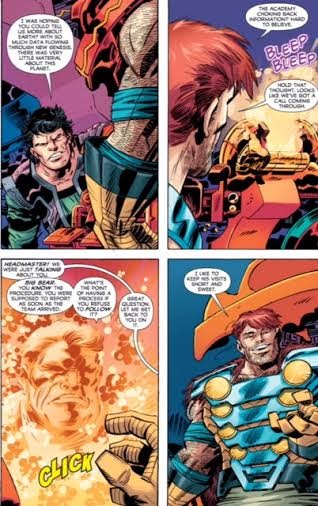 The first couple of pages focusing on the kids includes a fair bit of bickering, and I feared this would be a grumpy New 52 book in line with early Justice Leagues, but no, this really is a Giffen and DiDio story, full of good-natured souls. There's just the right amount of humour, including a wee nod to Kirby's Marvel work. I'm assuming that as with their previous teaming on OMAC, Giffen is taking the lead on plotting and providing breakdowns for assured inker Scott Koblish, while DiDio collaborates and scripts. Whatever the working practices, the results are superb. The book looks amazing, a perfect pastiche without being a stiff tracing job. The compositions are big enough, the finishing bold enough for any deity. And Hi-Fi's colours are eye-poppingly in your face, just the right side of migraine. I feel like pausing this review to go back and look at the whole thing again, from the bright and beautiful cover to the brash final image.

As for DiDio, this is the best dialogue I've seen from him, with a nice balance between the grandiloquent and the grounded. There's an awful lot of set-up here, but it's woven into a fast-paced opening chapter with deceptive ease and not a little wit. I want to know more about every character and don't mind at all that so far there's no mention of any Infinity Man. I expect he'll show up next issue as the cliffhanger collides with our young heroes.

In the Seventies, the Forever People were basically super-powered Flower Children, and to an extent they're still that - idealists on a multiversal mission, hoping to change reality, one world at a time. You could also see them as Mormon elders, sent far from home to spread their gospel, but with wilder suits. Whatever the case, just see them - this series has enormous promise and I'd hate it to vanish after eight issues, as did OMAC. People like me are constantly pointing out that DC's current publishing line needs more fun, well, here it is.