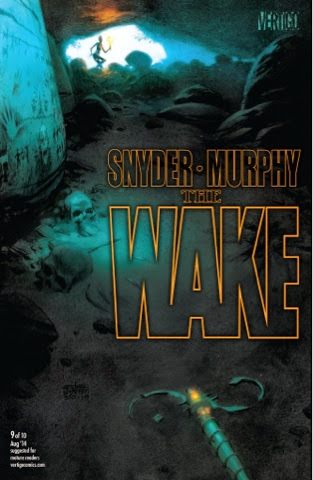 It's three months since last issue and Leeward has risen to be first mate of Captain Mary's crew of mutant mariners. She's convinced Mary to devote his weird ship's resources to investigating the radio signal from the 21st century which may be the key to grabbing the world back from the savage Mer creatures. Leeward is even recording her own messages, like spiritual forebear Lee Archer.

That's how the penultimate instalment of Scott Snyder and Sean Murphy's sci-fi high adventure story begins, and as for the ending, it had me punching the air with glee. In between we get intriguing snippets of the odyssey of Leeward and crew ... and watch as hope begins to crumble. 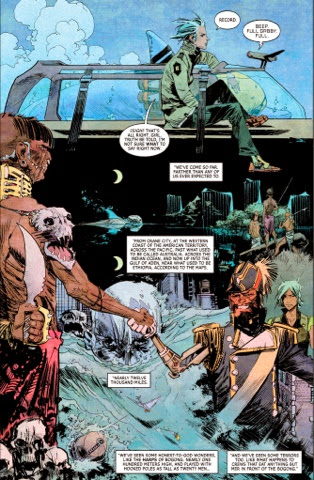 Snyder is ever driving us towards the ending, unravelling clues to the bigger mystery, but there's always room for telling personality details, whether it's the brave tenacity of Leeward, good humour of Mary or quiet evil of the Governess. And then there's Dash, the cutest dolphin ever to double as a snowmobile.

Murphy continues to produce pages that are individually fascinating, but essential parts of the storytelling machine. The level of detail that goes into not just a spread of panels, but an individual frame is remarkable. And he knows when to forego the particulars for something a little more impressionist.

The other members of the art team - colourist Matt Hollingsworth and letterer Jared K Fletcher - also deserve commendation; the former for a gorgeous, immersive palette, the latter for unshowy lettering that grounds the fantasy, making the occasional 'piratespeak' pictogram all the more fun. As for Andrew Robinson's cover, it's an evocative mood piece, daring you not to buy this comic. Editors Sara Miller and Mark Doyle's contributions aren't so obvious on the page, but if they weren't doing their jobs well, this comic wouldn't be so good.