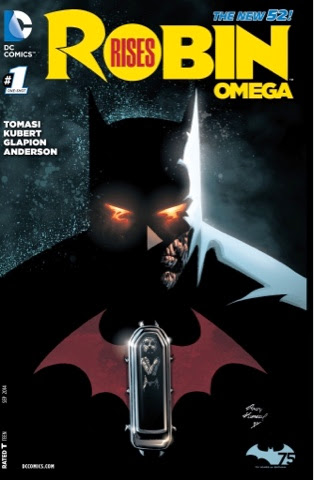 Batman's ongoing quest to bring Damian Wayne back from the dead spins off into a special as DC starts counting down to the the return of Robin.

Will it be Damian by Batman's side when the story ends at the turn of the year? It certainly seems so, given how long the sequence has been going on, and how it's apparently going to continue in the same direction. A swerve isn't out of the question, but this issue begins with a recap of Damian's life and death, and ends with Batman swearing to follow his corpse not so much to the ends of the earth as far beyond it.

In between there's a tremendously entertaining, massively over the top battle with Glorious Godfrey. The Darkseid underling wants the Chaos Shard - from early issues of the Batman/Superman title - which is hidden in Damian's sarcophagus. Given it may have enough power to restore his dead son, Batman isn't having it. Cue Batman, Ra's al Ghul, Frankenstein and the League of Assassins vs Glorious Godfrey and his parademons. Bring in sundry other superheroes. Mix and duck. 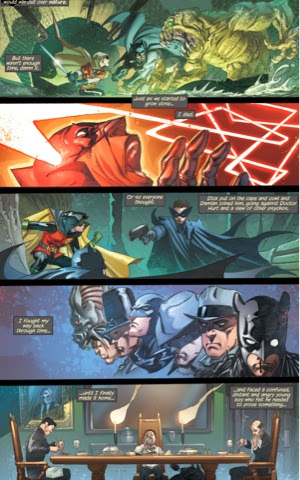 This really is enormous fun from writer Peter J Tomasi and artists Andy Kubert and Jonathan Glapion. The early pages, condensing several decades of comics history, is a masterclass in implausibility, and all the better for being presented utterly straight-faced in Bruce's narration. Kubert and Glapion draw in softer than usual style, and Brad Anderson goes impressionistic with the colours. I'd love to see them apply this style to an entire issue. 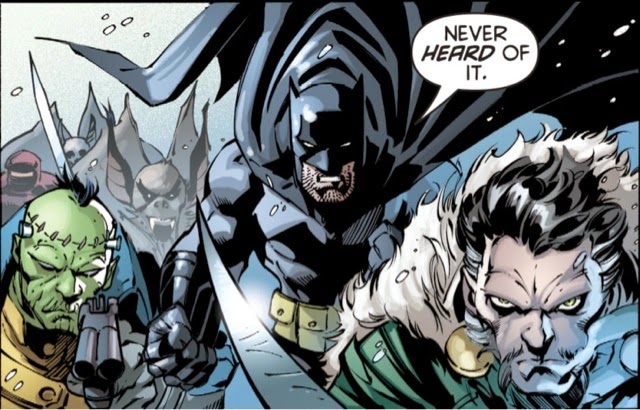 Not that the rest of this double-sized book looks bad by comparison, it's more a case of differently excellent. The Kubert family style is to the fore - especially when we're looking at Ra's al Ghul, that's pure Joe Kubert - and it's a look I've loved for a long time. Andy Kubert's own artistic inclinations are much in evidence too, in terms of composition and movement. Add in Glapion's sharp finishes and Anderson's colours and we have sequences as good as the excellent opening.

I do wish we didn't keep getting shown the wrapped corpse of ten-year-old Damian, though - too creepy.

While the big battle which fills most of the issue is just good superhero comics, it was the little moments that really made me smile - Alfred sitting as equal head of the family at Wayne Manor dinner time; Glorious Godfrey tasting a snowflake. I'm a little sad to see Batman lashing out at colleagues in the final pages - Holy Recidivism! - but I suppose he needs to be desperate to journey to Apokolips.

And that's where the Caped Crusader is going, as this storyline winds back into the Batman and Robin monthly for a while before the next Robin is unveiled in another special, Robin Rises Alpha (don't ask for an explanation of the backward titling, it's all Greek to me ... maybe Darkseid's Omega Effect will prove pivotal in reviving Damian).

As a jumping-on point for the Return of Damian (or Not) storyline, this issue is a success. It's a comic that reads smoothly and looks great, recapping events and moving the story forward. I had a ball with it.
Andy Kubert Brad Anderson Jonathan Glapion Peter J Tomasi Robin Rises Omega #1