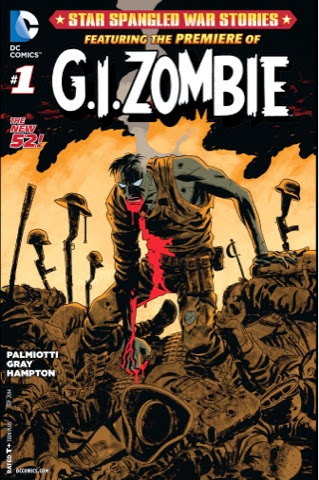 After the sales disappointment of New 52 titles Men of War and GI Combat, DC bravely makes another foray into the war genre. The USP here is that the star of Star Spangled War Stories is a zombie.

Now, I'm not the biggest zombie fan, but I am a follower of writers Justin Gray and Jimmy Palmiotti and illustrator Scott Hampton. Darwyn Cooke likewise gets my attention with his cover image of an undead soldier presiding over a scene of carnage.

Turns out, this opening image is all kinds of misleading. Yes, the title character is a soldier, but he isn't fighting in one of the classic theatres of war - he's on the home front of today, working as an FBI agent. And I don't mind a bit, because what's behind the covers is far more than I was expecting.

This packed opening chapter is so twisty-turny that even laying out the set-up will have you second guessing - just trust me, if you like dark drama with multi-layered characters and pitch-black humour, Star Spangled War Stories is worth a read. While some of the dialogue is a tad ripe, I can see an in-story reason; all in all, the script is surprising, suspenseful and absorbing. There's no way I'm missing the next instalment. 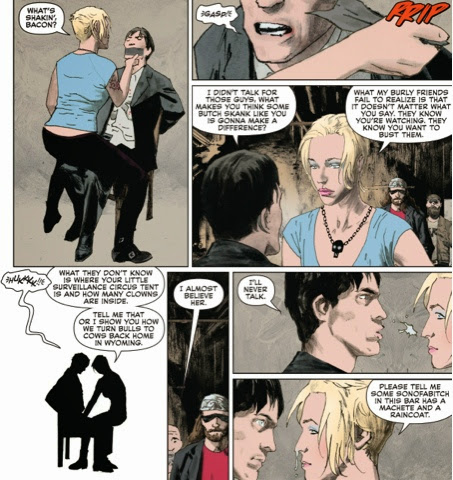 Hampton has been producing moody comic art for decades and his work here doesn't disappoint. The realism of the main characters draws me into the story - I'm assuming photo reference has been used. The downside of this is that occasionally the expressions don't match the dialogue. Still, it's a pleasure to see Hampton's full-colour work as his imagination and craft ground the fantasy of GI Zombie. Things get pretty graphic, so if you're not down with blood-spurting limbs, avoid. But I imagine anyone buying a book with 'zombie' in the title will cope. (Speaking of the title, would someone please insert the missing hyphen from compound adjective 'Star Spangled'?)

Will Star Spangled War Stories give DC the non-superhero hit it craves? If quality counts, there's no doubt that it will. Sadly, readers - me among 'em - don't always give new books a try. If DC has any sense at all they'll be giving away copies at the San Diego Comic Con over the next week, to get some buzz going. There'll be a preview in their other titles this month. House ads, Channel 52 ... anything to get eyes on a very promising new book. Given I want this series around for awhile, it's fingers crossed DC's marketing maestros step up to the plate. Otherwise, this is one very dead zombie.
Darwyn Cooke GI Zombie Jimmy Palmiotti Justin Gray Scott Hampton Star Spangled War Stories #1 review