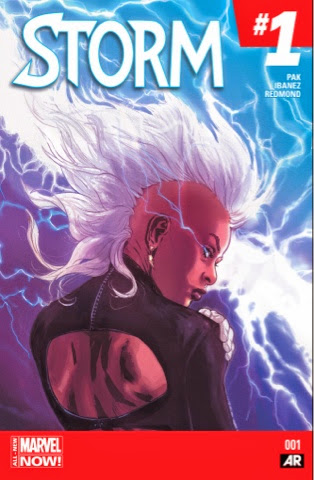 Welcome to your first ongoing series, Storm. Hope you survive the experience.

Actually, the old X-Men catchphrase doesn't apply in this debut issue, as Storm is so powerful, so self-assured, there seems little she can't handle. Certainly the thugs who don't like her interfering - that is, saving lives - in their small state of Santo Marco seem little threat to the weather witch.

They are, though, a real problem for the people Storm wants to protect, giving her a different kind of headache. Should she hang around and show the bullies who's boss, and likely make things worse for the people after she's left, or retreat for now, keeping delicate pro-mutant negotiations on track?

Back at the Jean Grey School, headmistress Ororo has another problem in the shape of a rebellious young pupil who challenges her beliefs.

Writer Greg Pak lays out Storm's character and situation with admirable economy, telling us everything we need to know about her in the first few pages. The fact that she was written for decades by Chris Claremont, the king of internal narratives, doesn't hurt ... it makes Ororo's running commentary seem the most natural thing in the world.

And Pak doesn't make things entirely easy for the First Lady of the X-Men; as well as the moral dilemma and tactical problem, Ororo does feel pain, as the tsunami she's trying to stop kicks back.

It's also good that Pak doesn't present Ororo as the untouchable, perfect goddess she's been at times. She gets things wrong, she gets things right - she's a person, not perfection. 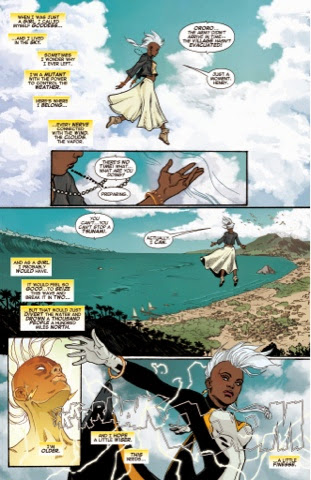 The art is pretty much perfection, mind, with illustrator Victor Ibanez and colour artist Ruth Redmond depicting Ororo as strong, graceful, a true force of nature in power and personality. They do a similarly fine job with the supporting players, especially new mutant Creep, and the Beast - hate Hank's current design as I do, there's no denying they capture the look well. Ibanez and Redmond also conjure a convincing Santo Marco, full of convincing people and weaponry against realistic backgrounds.

I've not heard what the direction of this series will be, though threads set up here look to be continuing. I hope it's not too school heavy, else what's the point of this being a Storm solo book? If Hawkeye's series can be about what he does when he's not an Avenger, why not have this concern what Ororo does when she's not an X-Man? OK, she's a busy headmistress, but hey, Logan's being headmaster has never got in the way of Wolverine's own stories.  We know Storm can fly solo. Let's see it.
Greg Pak Ruth Redmond Storm #1 review Victor Ibanez