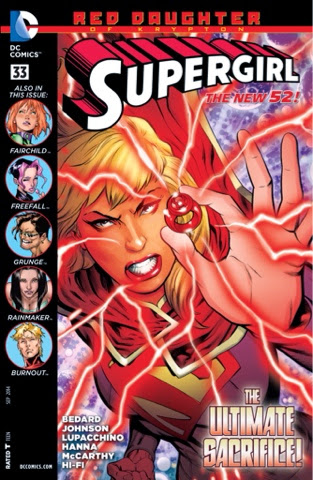 A wonderful last page. That's what this finale to the Red Daughter storyline has. I whooped, I smiled. Writer Tony Bedard has delivered on his promise to put some light into Kara's life

He does it literally, as well as metaphorically, as Kara uses the power of Earth's yellow sun to best Worldkiller-1, the sentient Kryptonian armour out to possess her. Before that happens, Bedard gives us a fine confrontation between Kara - still a member of the Red Lantern Corps - and W1 in Brazil. Forcing a fight in the packed favelas of Rio, W1 sees the natural concern Kara has for those less powerful than her as he tried to conquer/court her.

She's using her rage at, oh, all sorts of things, to power her resistance to W1, but she harbours no resentment towards the people of Earth. Her recent travels, and travails, with the Red Lanterns seem to have changed Kara, given her some perspective on when anger is, and isn't, appropriate. And while the fury is there, so is the compassion that had become buried during her tormented first few months since waking up on Earth, lonely survivor of a destroyed world.

Kara uses her Kryptonian powers and Red Lantern abilities, but in the end it's the intelligence she was born with, and the experience she's gained as a young hero, that saves the day.

There's even a sign that she's coming round to liking cousin Kal - sometimes it takes a drastic situation to make you realise what you've got.

By the end of the issue, Kara is no longer a Red Lantern, she's Supergirl once more. A better Supergirl, one ready to embrace her role as citizen, and protector, of Earth.

I really want to reproduce the final page here, but it's the last page of an important story for Kara, and deserves to be experienced in context. It's a great moment that's been earned.

Helping regular artist Emanuela Lupacchino by pencilling some pages is onetime Wonder Man artist Jeff Johnson. I think I can see who did what, but don't make me commit. Safe to say there's some good storytelling throughout, Kara remains on model and W1 looks suitably freaky. The Rio scenes look good (apparently the footie fans have gone home), there's a visual nod to something that happened to Supegirl in the Eighties and the space battle is a winner. Kara's moods are perfectly evoked, from anger to desperation to quiet triumph. A shout-out, too, to inkers Scott Hanna and Ray McCarthy, colourist Hifi, and letterer Rob Leigh, whose W1 font had me reading the baddie's words in a growly voice. That never happens.

A great issue all round is marred only by a mislabeled two-page 'epilogue' which has no relation to anything that's ever happened in this series. It's by a different creative team and is an insult to Supergirl fans who pay to read about Kara's world. Apparently Superboy is going to be hanging out with Wildstorm's rubbish Gen 13 teen team. Another week, another terrible new direction ...