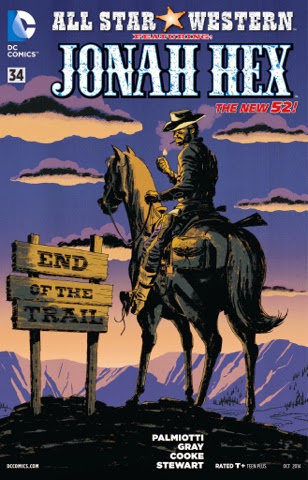 He's had a fine run, pre and post-New 52, but this issue the curtain falls for Jonah Hex as All-Star Western is cancelled. Launched with Batman links in a bid to widen the audience, ASW has also seen Jonah spend time in the 21st century, but he's been back home in the 19th for a while - that's where he works best, and that's certainly where I want him as he leaves us for now. 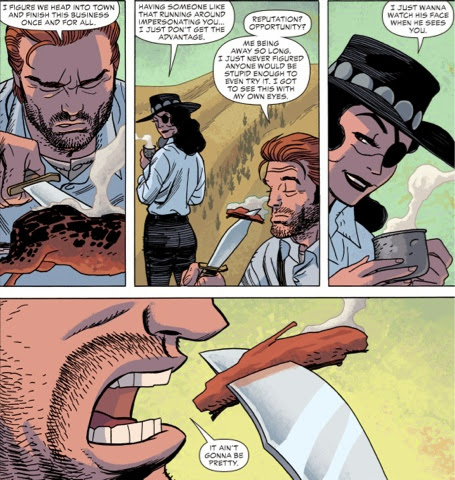 This issue sees Jonah and partner Tallulah Black head for a small town where someone is impersonating Jonah, classic scars and all, trading on his reputation to take over with his gang. It's safe to say Jonah and Tallulah deal with things the way they usually do, with lots of bullets and no bull.

By the end of the book Jonah and Tallulah are off in an unexpected new direction, one I hope is followed up on soon. For now, we have a sharp, satisfying tale by writers Justin Gray and Jimmy Palmiotti and artist Darwyn Cooke that cleverly leaves the future open. I won't say any more because despite the writers playing extremely fair, I never saw it coming, and you'll enjoy discovering it for yourself.

I will say that the predictable last-issue re-scarring of Jonah - his face was restored during his trip to the future - doesn't come, and I couldn't be happier. I'm sure it'll happen eventually, but just this once, Jonah gets a happy ending. 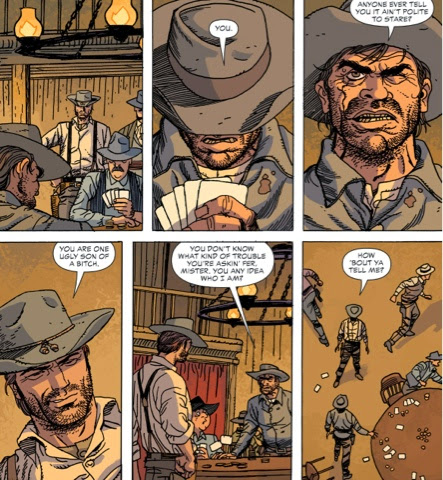 Cooke's interiors are a delight. The first scene, with Jonah and Tallulah enjoying a morning dip, is open and optimistic, the town moments crowded and depressing. There's real personality in the faces of the players, short, effective bursts of action and a perfect final page. And I like the signage nods to previous artists, which are fun without being too distracting. Great colours, too, from Dave Stewart, a master of lighting a scene, and letters from the reliable Rob Leigh. And thanks, also, to editors Harvey Richards and Brian Cunningham, for steering the ship. Sorry, stagecoach. Then again ...

I'd say this is a great issue to go out on, but Jonah Hex stories have maintained this quality for years now, with Gray and Palmiotti writing consistently excellent instalments and a battery of fine artists drawing up a storm. If you've never tried the Western bounty hunter's stories, grab a trade, or just this issue. You won't regret it.
All-Star Western featuring Jonah Hex #34 review Brian Cunningham Darwyn Cooke Dave Stewart Harvey Richards Jimmy Palmiotti Justin Gray Rob Leigh Tallulah Black