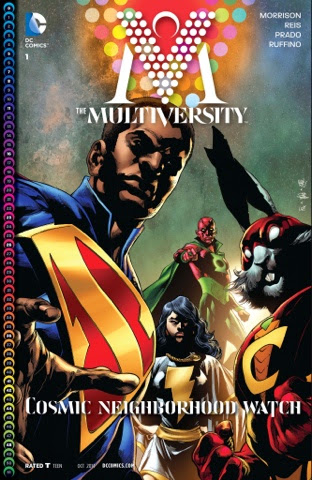 A few years ago DC published Final Crisis. This comic tells the story of the one after that. It mirrors the original Crisis on Infinite Earths by having heroes from parallel universes gathered in a Monitor satellite to be told by Harbinger that Something Awful is Coming.

It differs in that the writer behind this comic - the prologue to a six-issue look at some of DC's alternate Earths - is Grant Morrison. So where COIE was densely plotted but pretty straightforward, this is trippy from the start. Big ideas are tossed out scattershot style and it's far too soon to say which will prove throwaway and which vital to the series.

So, we have Nix, the Last Monitor from the Final Crisis crossover, summoned to Earth-7 where an Australian hero named Thunderer is in big trouble. Nix urges him to leave in his own dimension-spanning craft to get help, while he remains behind to face a terrifying, yet stupid-looking, world destroyer. Thunderer winds up in the Monitors' satellite, along with President Superman of Earh-23, Captain Carrot, Dino-Cop and dozens of other strangely familiar, and attractively novel, heroes. After hearing the message from a holographic Harbinger, a few of them set off on a factfinding mission in Nix's living music craft, the Ultima Thule, passing through the Bleed, the extra - or is it, inter? - dimensional spacecraft that allows them to see all 52 parallel worlds. They land on one of them, Earth-8 (they were hoping to reach Thunderer's planet) where there's a new batch of weirdness to face.

Which is quite enough recap - it ain't easy!

Concepts in this issue feel as if they're newly born from the forehead of Morrison, but of course, such things as parallel worlds vibrating on different frequencies, and comic books that fictionalise real events from sister Earths, go back to the early Sixties, the dawn of DC's Silver Age. Morrison mixes them with his own concepts, such as supergods and under-realities, to make one very out-there, complex comic. 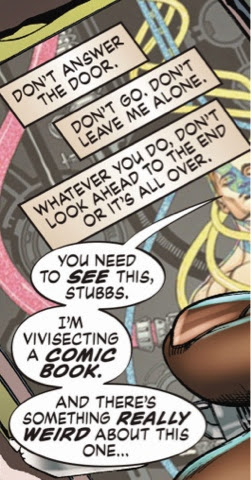 The opening pages with the by-now expected brand of Morrisonian metafiction and studied weirdness, tried my patience - all surreal entities spouting dramatically enigmatic words and claiming that we readers are part of the story - but when the heroic counterparts and coolest Captain Carrot ever showed up, I began having a whale of a time. 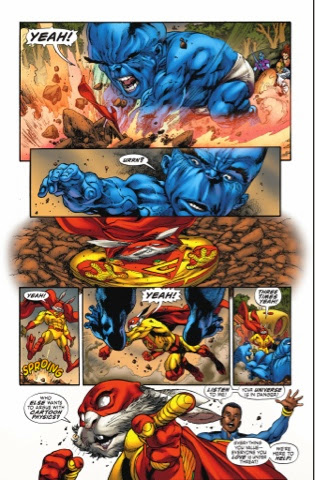 I won't be surprised if the end of this event frustrates me as did Morrison's Final Crisis, but the upcoming issues focusing on particular Earths look very promising. And I love Dinocop, and the return of Lady Quark and Lord Volt, and the JLA Babies, and President Superman's Brainiac belt, and Nix's most surprising sidekick, and ...

And visually, this issue looks amazing, with former Aquaman artists Ivan Reis and Joe Prado drawing up a storm, and Nei Ruffino colouring beyond the call of duty. The characters look splendid, the backgrounds amazing, the action immense. There's also fine work from letterer Todd Klein, whose facility with fonts assigns different voice 'signatures' to individuals, without giving the reader migraine.

There is a bit of a visual disconnect towards the end as the explorer heroes hit the Marvel-style Earth 8, with scenes of Fantastic Four and Dr Doom analogues not meshing with scenes of the Not-Avengers nearby - I thought we were flipping between two worlds for a second there.

But overall, I enjoyed this opener. It's big, it's splashy, it's daft - and we're only required to follow a handful of issues to get the story. It's also a callback to the old DC, before someone decided that multiversal adventures were off the table. Maybe Grant Morrison is right, and we readers are choosing the adventure? In which case, we chose well.