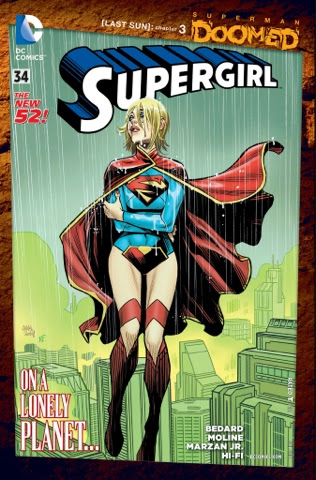 I wasn't too hopeful going into this issue. Just look at that cover. It's well drawn by Cameron Stewart and lushly coloured by Nathan Fairbairn, to be sure, but check out poor, sad Kara - if this were the Sixties, a mob of family and friends would be stoning her, saying 'get off this planet, Super-Loser!' Look at that title: On a Lonely Planet.

Look inside and it's a different story. Here we have a pretty-much self-contained tale which sees Kara getting to know her new home planet, and rather liking what she finds. Falling to Earth due to the green Kryptonite poisoning unleashed in the Superman titles, the unconscious supergirl is found by a young wheelchair user. Michael nurses her back to health, keeping her out of sight of the authorities, whom he's pretty sure would persecute her due to her relationship with Superman. 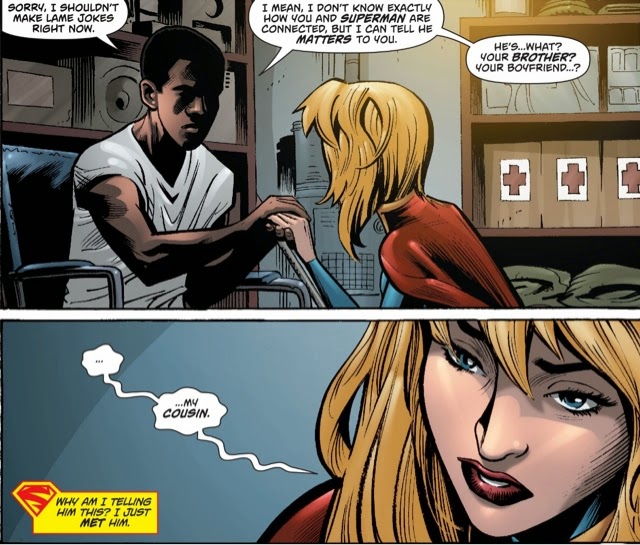 Supergirl learns why Michael is so concerned for her - having seen her fighting the Worldkillers in Washington, he knows she's a good person. It turns out that his parents are missing amid the Doomsday shenanigans so Kara, despite the continued risk of K-metal poisoning, flies out to look for them. Along the way she helps the rescue services find victims, get them to hospital. They're initially suspicious - or at least a tad wary – of her but Supergirl insists she's there to help, and they realise what an asset she is.

There's a happy ending as Kara finds Michael's parents and gets them to hospital, and a happier one as Kara admits she likes this guy and gives him a kiss. And decides she'd rather like another – but it's the end of the issue, so cue cliffhanger. Think Cyborg Interruptus.

Tony Bedard gets everything right this issue. Tasked with crossing this book over with the interminable, patchy SuperDoom crossover, he chooses to skirt around the edges; the story is recapped, the green K cloud is a factor and Kara's rescues take place while Wonder Woman is fighting Lois Lane, but that's about it. She's kept well away from the gathering of heroes that's been trying to protect the Earth over in the Superman titles, allowing room for her own story, for character growth.

Kara has met a a guy she liked, and he likes her right back! Awhile ago, there were the beginnings of romance with Silver Banshee Siobhan's brother, but he was written out. Which is fine by me, he was connected to demons and I'd rather Kara were with a more regular guy. And that's what Michael is - a big-hearted fella who isn't bitter about what he lost in a car smash, who'd rather concentrate on the gifts he still has - life, and the future he makes for himself. Without ramming it down our throat, Bedard gives Kara something to think on, and she's receptive, having last issue realised that yeah, she's had an awful  time, but how she reacts to the cards life has dealt is up to her. And like Michael, she's choosing to move forward. 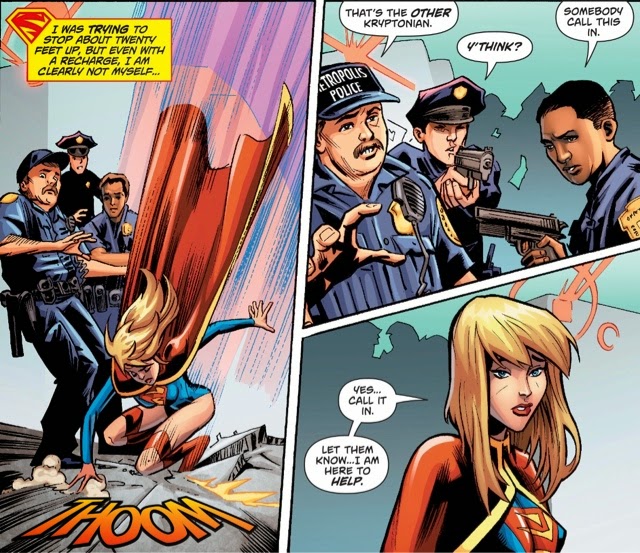 Bedard also gets major points for having Kara make an effort to be accepted by the emergency crews - the early New 52 version would have steamrolled past, shown them up while helping people, but now Supergirl wants to be just a member of their team. Thank you Red Lanterns! 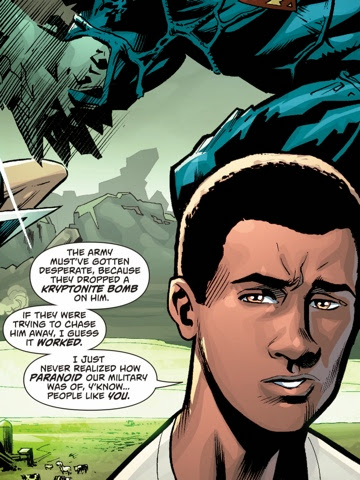 I also like that in Michael he has a regular person who agrees with readers who think the authorities' mistrust of the Super Family is over the top. 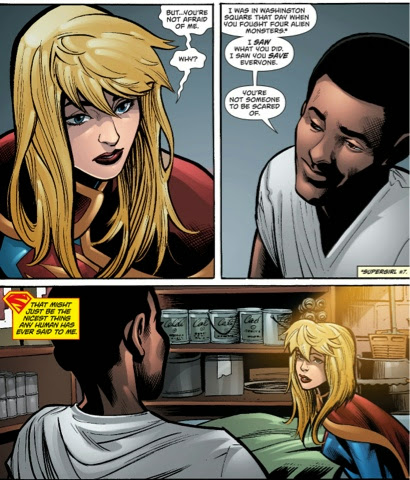 Regular artist Emanuela Lapuccino isn't around this month but filling in we have Karl Moline - remember him from Joss Whedon's Fray? - and he's perfect for this low-key issue. He's great at telling little expressions and body language, meaning it's easy to believe Kara and Michael are quickly connecting. He draws Kara's hair a little longer, and messier, than have previous artists and it's a look I like, it makes Kara look a warmer person. Partnered with inker Jose Marzan Jr, Moline gives an effective jagged energy to the SuperDoom recaps. Also worthy of mention are the final pages, in which the mental energy of New Yorkers is stolen by Brainiac - they're nicely drawn, but really brought to life by the colours of Hi-Fi.

What else is there to say but, I'm terribly sorry to hear - only a day after an encouraging interview about his plans for this book - that Tony Bedard is leaving. He's been the best Supergirl writer since Sterling Gates and I can't understand what DC is thinking here. This issue is further proof that he's the writer Kara needs, the one who can make her the inspirational heroine she should be. I wish returning writer Mike Johnson and new co-writer Kate Perkins the very best, and I may well love their work, but dang, this book is terrific under Bedard.