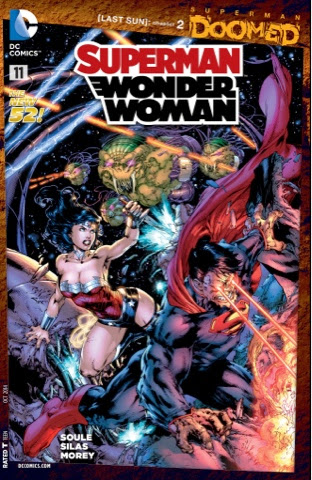 Last week we had three chapters of Superman Doomed, two of them giant-sized. It was all too much, I couldn't face reviewing them. A week later, there's a single chapter and things seem more manageable.

We're pretty much where we've been for the last several chapters - most of the people of Earth are in a Brainiac-induced sleep and being psionically sucked dry. The remaining free heroes of Earth are based on Lex Luthor's new JLA satellite - confusingly called The Bunker - and formulating plans. The difference is that Superman has finally thrown off the Doomsday virus, he's himself again.

The cliffhanger from the end of the last chapter - Mongul and Non escaping the Phantom Zone and about to ravage Earth - is quickly tossed aside. Realising there's a Brainiac plot on the go, they retreat back inside the ghostly world.

The incident pretty much sums up this ongoing - and ongoing and ongoing - crossover in the Superman titles ... big threats quickly removed to be succeeded by more big threats and no plausible prospect of everything wrapping up. The Mongul/Non none-event is perhaps the most blatant bit of cliffhanger fodder yet. The rest of the issue is yet more scenes of heroes explaining previous chapters and Brainiac drones being bashed about. Superman works out that the alien 'Collector' is draining the Earth folk bit by bit and he hasn't got long to prevent their deaths. This drives Wonder Woman to the Phantom Zone and Superman to ... well, if you've been following this story, you can probably guess. 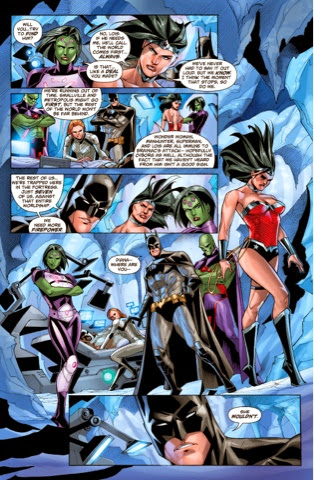 Oh dear, wake me up when it's over. The promising Pak/Kuder Action Comics run has been utterly derailed by the overstuffed pudding of a storyline, while this series has simply lost its focus. There's a panel, maybe two, in which writer Charles Soule directly addresses the Superman/Wonder Woman relationship, but otherwise this chapter could be slotted into any of the titles. 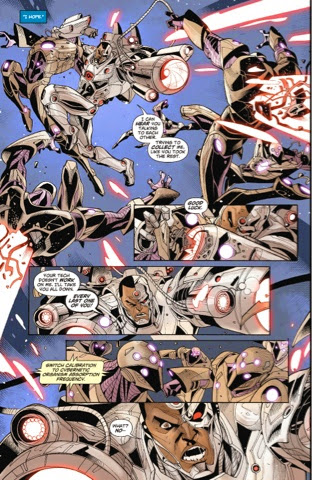 My favourite moment doesn't feature either of the title characters, it's Cyborg making a last stand against some non-specific Brainiac thingies. It's rare for Vic to get a decent spotlight that shows why he's JLA-worthy, but here it is.

I'm not familiar with artist Thony Silas, but I like his open, angular style. Mind, if he's going to draw Batman with trunks, he could at least give Superman his red shorts back.

Two more chapters and we're done, according to the blurb at the end of this issue, and thank goodness for that. I don't know if it's the DC higher-ups, or Superman Group Editor Eddie Berganza, who keeps commissioning unwieldy crossovers such as Superman Doomed and the two H'el storylines, but the habit needs to be knocked on the head. Let the Superman titles go their own way, with occasional linked characters and plots, but no more half-year 'events' that try to be epic, but mainly try patience.
Charles Soule Superman Doomed Superman/Wonder Woman #11 review Thony Silas