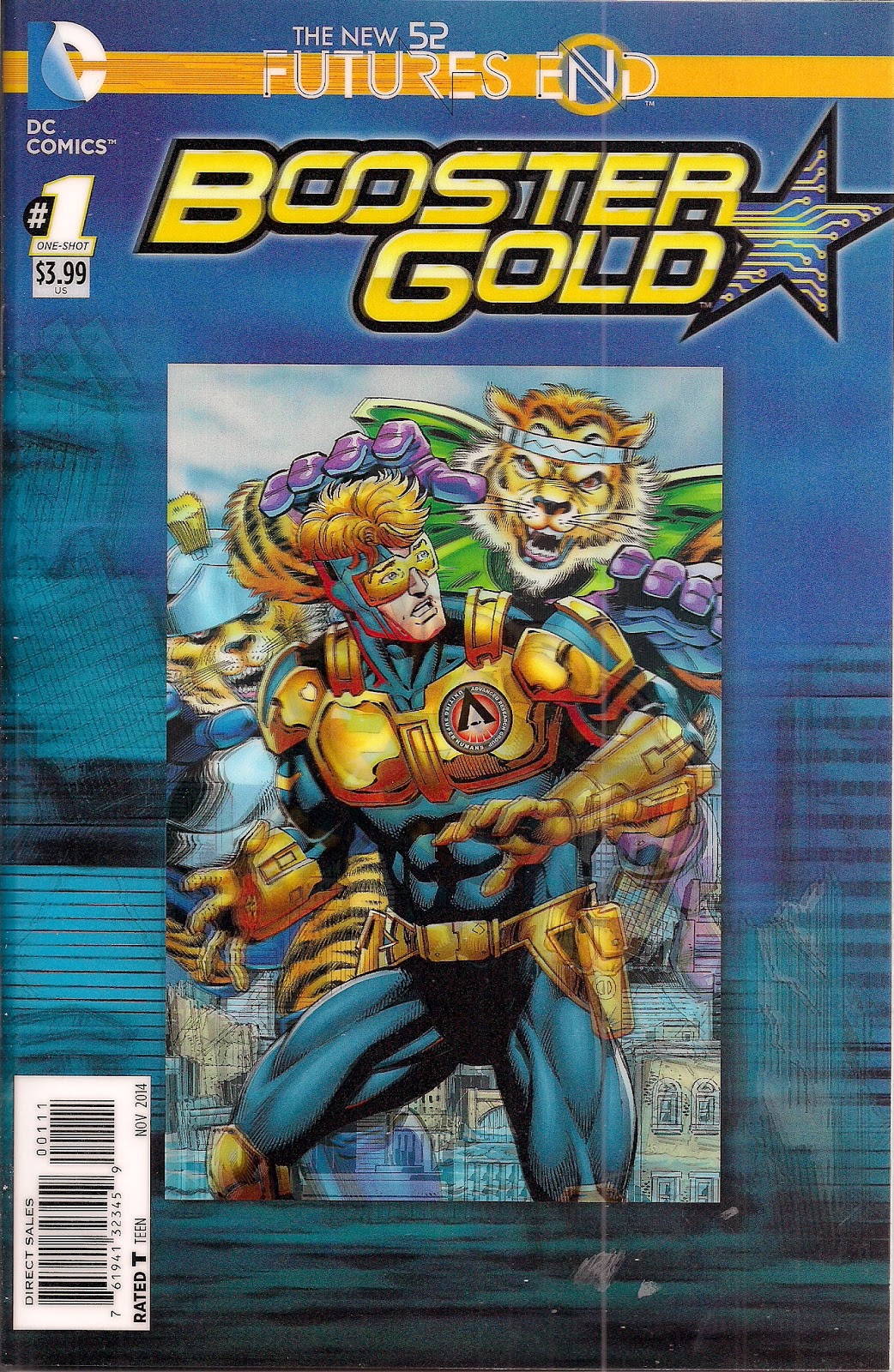 Gotham by Gaslight. No-good brigands scour the streets for their next mark. They come across a strangely dressed fellow in a rubbish tip. 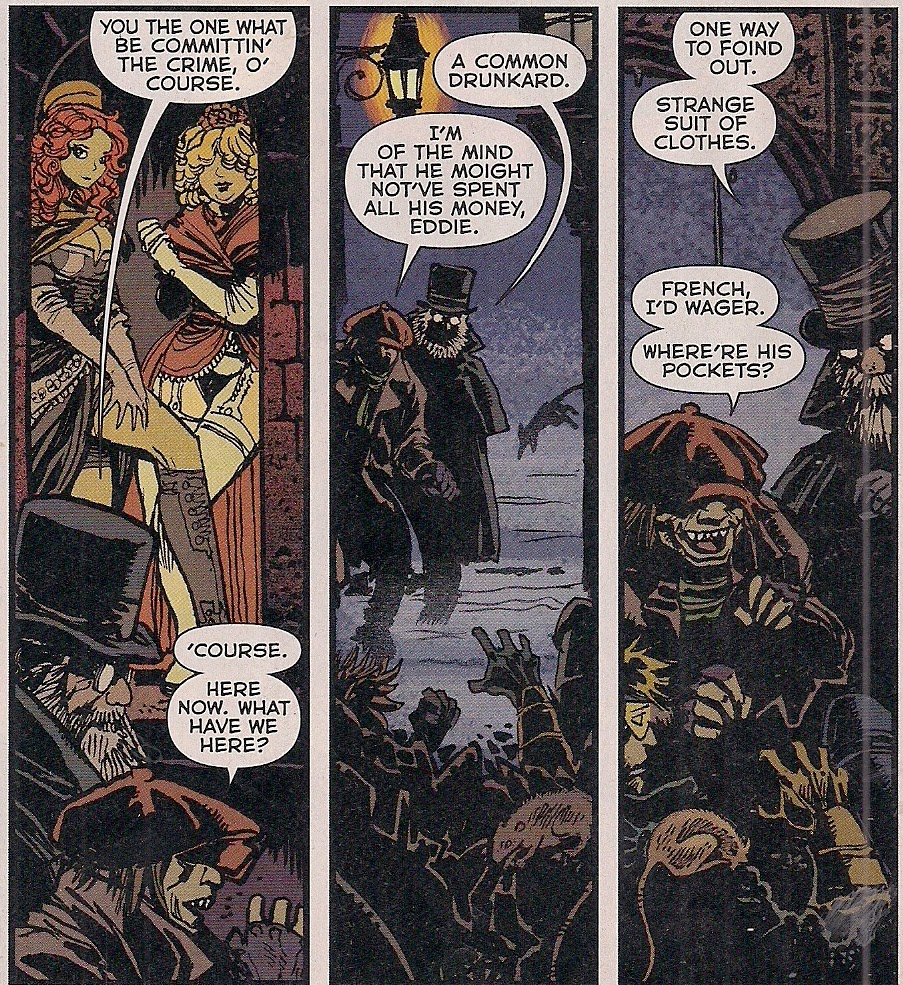 Hardly. It's a time-tossed Booster Gold, wondering what's plucked him from the 21st to the 19th century. He's not there long, mind, as he's soon zapped back to the present day, where he sees another Booster fighting Kevin Kho Omac, with the new Blue Beetle unconscious at their feet.

There follow trips to the 31st century of the Legion of Super-Heroes, the Earth 4 of the Charlton Comics Captain Atom, the Great Disaster of Kamandi and a 21st-century Metropolis where his sister Michelle - Goldstar - awaits. Some of the stops see people reference lost powers returning.

And occasionally we visit another Booster, captured and tortured by an unknown entity who wants the answer to some question.

We finally learn what the villain wants when bouncing Booster bursts in on captive Booster. Their costumes are slightly different, they're different ages, but they seem to be the same man.

I won't give away the reveal to that particular plot strand, but I will say that for all its branding, this doesn't seem to be a Futures End tie-in at all. The cliffhanger 'To be continued' blurb refers us to the end of the weekly and its forthcoming sister title Worlds End, next March or something, but that's it. The story, Pressure Point, links to the last time we saw Booster in the New 52, when he was watching Superman and Wonder Woman kiss on monitor screens and worrying about it. But there's nothing in here of Cadmus Island, or Terry McGinnis Batman, or the mega-annoying Fifty-Sue.

And that's fine by me. Booster time and space hopping, showing us the fun of the old DC Multiverse? I'll take that over a bloated crossover anytime. Seeing writer Dan Jurgens handle the surprisingly English dialogue of Gotham by Gaslight denizens is a delight. Seeing Moritat draw it is even better - his Victorian Batman is a treat. Then there's Steve Lightle reunited with the LSH for a blisteringly good page or two, Ron Frenz giving us his cracking Kirby for the Kamadi sequence... 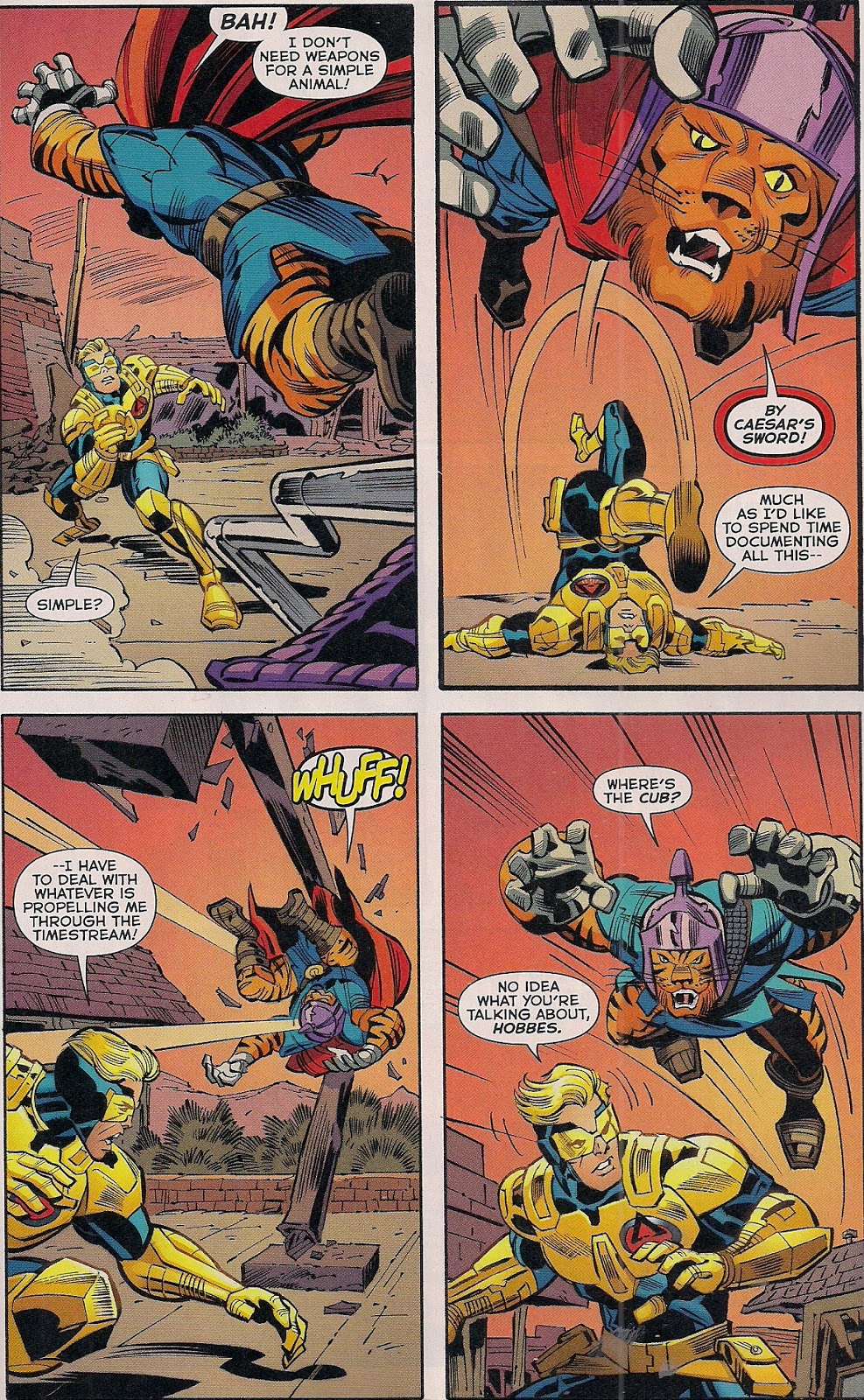 There are also artistic contributions from pencillers Brett Booth, Will Conrad, Stephen Thompson and Jurgens himself, with inks from Norm Rapmund, Scott Hanna and Mark Irwin. John Kalisz provides suitably smart colours for every era, with nary a wrinkle >cough Dream Girl has white-blonde hair< while Taylor Esposito's letters are spot-on, with some especially nice design on the title page.

More often than not, such a gaggle of artists would mean a mess of a book, but a tonally shifting issue makes that possible weakness a definite strength.

I do hope that we are indeed eventually given the answers to questions raised and not resolved here, such as who's behind Booster's time-hopping and who's the torturer. For now, I'm just glad to have spent time with Booster Gold, whose current status as a time agent (it turns out that, amusingly, his partner, Rip Hunter, Time Master supplies briefs covering the likes of The Great Disaster) suits his character splendidly well. I know a version of Booster is upcoming in the excellent Justice League 3000 book, but hey, time travel, we can have more than one.