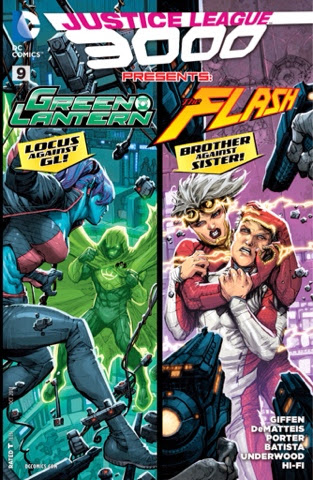 I'm a couple of weeks late with this review. Then again, this comic is set in the 31st century, so maybe not.

If you're just coming in, this is the story of a reborn Justice League, freedom fighters against The Five, massively powerful villains who are taking over the universe. The initial issues were powered by the mystery of the heroes' origins - were they the 21st-century Green Lantern, Superman, Batman, Wonder Woman and Flash resurrected, like King Arthur, at the time of greatest need? Were they descendants? The world's greatest homage act?

Pick up the back issues and find out for yourself, because giving it away would rather neuter the conflict around the puzzle should I persuade you to pop to the back issue bins or Comixology. Enjoy this series as I have, as a constantly evolving, unpredictable future fantasy of good vs evil starring familiar, yet different, faces.

If you have been keeping up with Justice League 3000, you'll know that there's a new Flash in town. Scientist Teri, one of the twins behind the project which set up the new League, now has super-speed and she's super-mad at her brother, Terry. Her first mission as a superhero is to stop him using nano-mines planted in the other Leaguers' heads long enough to allow them to get off planet and regroup for a final assault on The Five.

As it turns out, the other heroes escape even before she convinces Terry to do as she says, and they send Superman back for her. This makes for a hilarious moment as the new Superman - not a guy familiar with finesse - tackles one of the Five, Kali, in his inimitable way.

The new Flash's first outing takes place in a back-up strip, with most of the issue showing us how the rest of the JL escape. It's typically fine work from writers Keith Giffen and JM DeMatteis, progressing the story while giving us glorious character moments. While the first few issues portrayed an angry, confused League, since learning their origins they've settled down, begun acting as a team and actually started caring about one another.

We've yet to see the bad guys attack the League en masse - they seem to hate one another as much as they do the team - but I hope it comes. Coeval, Kali, Locus, Convert and Terry (I'm assuming this turncoat counts as the fifth) really do need their arses kicked. If it happens, expect regular artist Howard Porter to draw up a storm; he's done a great job of establishing character and world building, giving the series tremendous heft and pace. Presumably he couldn't draw all this issue, hence the Teri scene being a separate segment. Happily, editor Harvey Richards brings the vastly underrated Chris Batista on board to provide pencils, while LeBeau Underwood applies some sharp inks. They keep everything on model without slavishly copying Porter's style. Visual continuity is aided by the letters of Taylor Esposito and colours of Hi-Fi Designs. 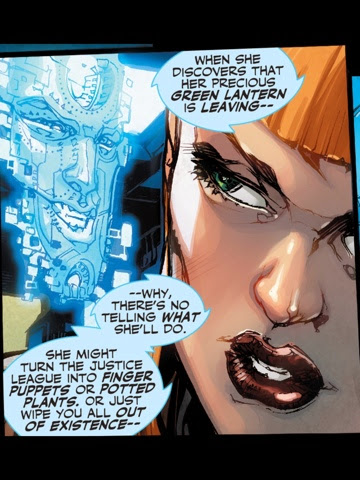 It's a tad fanboy, but my favourite moment this issue nods to the JLA comics of the Silver Age, specifically, the classic covers for #9 and #10. 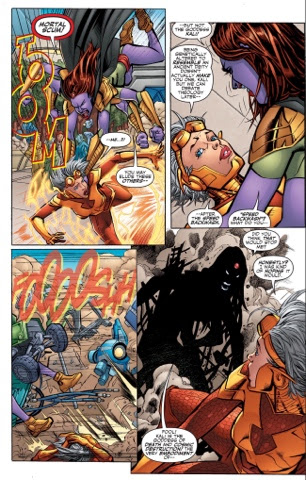 I also love that a usually forgotten after-effect of super-speed gets some play, and the throwback-style cover just makes me smile.

Justice League 3000 is an excellently plotted, wonderfully written, superbly drawn comic from veteran creators having fun with the wider toybox of the DC universe and a refreshing antidote to the general darkness of the New 52 line. If you've not yet tried it, give it a go.
Chris Batista Hi-Fi Designs Howard Porter JM DeMatteis Justice League #3000 review Keith Giffen LeBeau Underwood Taylor Esposito