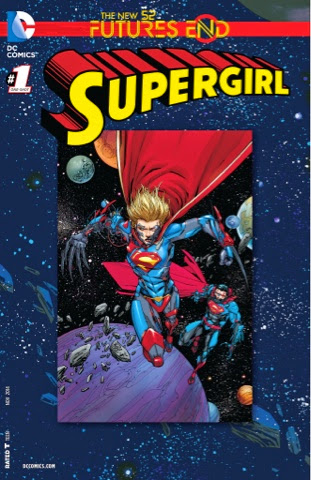 It's five years from now and Supergirl is gone, supplanted by a Cyborg Supergirl who can barely remember ever being human. She's united with the Cyborg Superman in a quest to find a world that can be transformed into a new Krypton, complete with 'upgraded' inhabitants.

As cosmic upcyclers, they've failed so far, but Cyborg Supergirl, whom Cyborg Superman designates Herald Two - guess who's Herald One? - has had an idea. She takes him back to Earth, scene of his most ignominious defeat but somewhere she believes the key to success lies. She aims to find a 'specimen' of 'Neo-Sapien', someone who looks Kryptonian with the genetic potential to spark a reborn race.

Thanks to the intervention of super-scientist Dr Shay Veritas, said specimen finds her first. He wants to talk, she wants to subdue him and mine his DNA. But he has an ace up his sleeve, the mental powers of a man born 100,000 years before his time. Yes, it's Adam Blake, also known as Captain Comet, and it turns out they have a shared past as members of the Wanderers super team. And lovers. 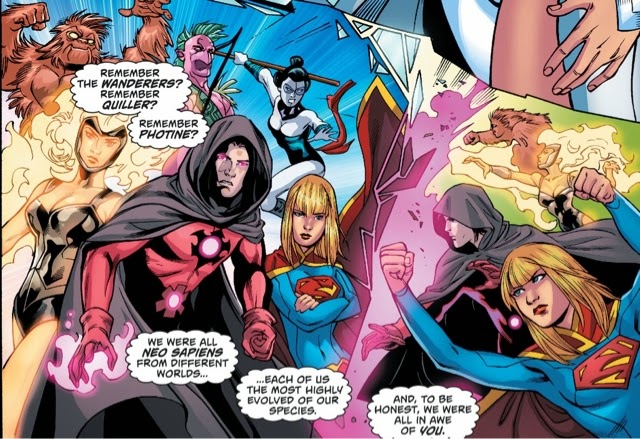 But is there enough of the original Kara in Cyborg Supergirl for him to reach?

It turns out there is, Adam lights the flame that burns Kara free and sees her turn on 'Herald One', demanding answers - who is he really, because he sure as heck isn't her cousin? By issue's end Kara has, literally and very painfully, rejected his idea of perfection and reclaimed her life. Her future isn't ending, it's just beginning. 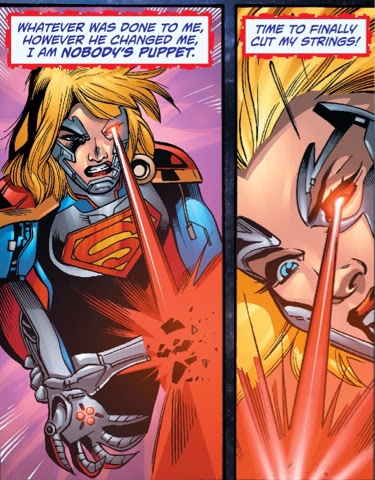 In a real world sense, though, it is a Futures End for Supergirl, as this is one of the last Kara stories for who knows how long by Tony Bedard - I believe he's on next month's Supergirl #35, but who knows with DC's tendency to chop and change? The stories he was expecting to tell, teased in online interviews, are no longer coming, with new writers announced for the book. So I savoured every page of this issue.

I hate the New 52 version of the Cyborg Superman, a Brainiac-transformed version of Supergirl's father, Zor-El. I abhor the idea that, even lacking the knowledge of their relationship, he would cut up her body and replace parts with robotics.

So making this Kara's Five Years Later fate makes perfect sense - the future is meant to be foul. And Bedard, bless him, uses the situation to show us just how strong Kara is. Yes, she's emancipated from her 'partner' due to the intervention of Adam, but he can only work with what's there. And what's there is the essential Supergirl, buried deep, but undoubtedly present. We see that early in the issue as Cyborg Supergirl refuses to countenance the murder of everyday Earth people.

And once the true Kara, regains control of her mind and sees what's been done to her body, I love the way Bedard plays it. Kara is fierce, and wants revenge. 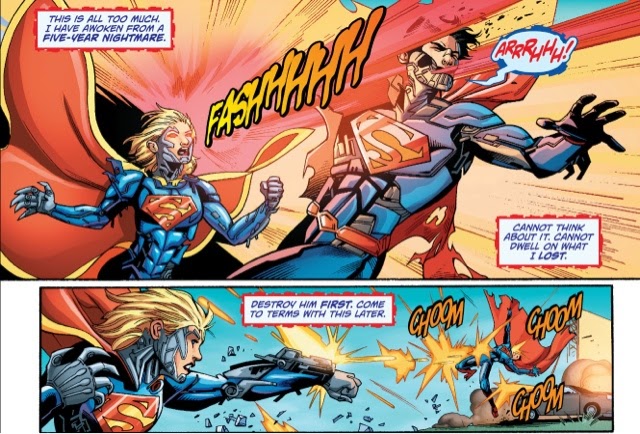 She recognises Cyborg Superman as a cancer in the universe, just as he ate away at her own body, and she's going to take him out.

Captain Comet is different here to how I remember him from Grant Morrison's Action Comics run, but the Neo-Sapien tag pegs him as the same guy. I guess he's gone through some changes in the several in-panel years since he was last seen.

One of the most entertaining aspects of the Futures End specials is seeing who turns up in a new form. As well as Captain Comet, this issue also gives us a version of The Wanderers, the Silver and Bronze Age Legion of Super-Heroes allies. I doubt they really would've figured in Bedard's regular Supergirl plans, but they make for a fun element here.

While she's pretty ravaged by the close of this issue, Kara has triumphed and is rewarded with a 'perfect moment'. I like that.

I also like that unlike most of the Futures End tie-in writers, Bedard explicitly references the events of that book. If any members of the current weekly's creative team steps down, DC would be wise to bring this smart writer on board.

Emanuela Lupacchino's storytelling is good, packed with power and feeling; I smiled at seeing how much the Cyborg Supergirl's obscene metal makeover is reminiscent of Superman's New 52 nonsense armour. Ray McCarthy inks the story and does a decent job, while Hi-Fi colours and Rob Leigh letters. There's isn't a single outstanding image but the entire issue is consistently fine. That's a win, I think.

Giuseppe Camuncoli, Cam Smith and Dan Brown's images for the lenticular cover are striking, but it's a shame Kara is scowling as much in the current day scene as in the future. Bedard has worked hard to put her in a place of optimism, and a newly content Kara would be a more dramatic contrast to the Cyborg Supergirl.

While I'd rather have seen Bedard and Lupacchino give us a tale of today's Kara, rebuilding a life on Earth, as gimmick-led event tie-ins go, Supergirl: Futures End is a classy entry.