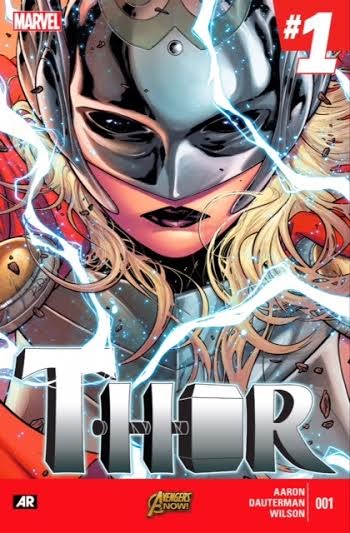 Thor the God of Thunder
Rode his mighty filly ...

Don't thump me, Just 'aving a larf. I'm not anti- a female Thor. As a huge Valkyrie fan I'm intrigued as to which woman worthy of wielding Mjolnir gets to go by the name of Thor. We don't learn who the new Thor is this issue, but we do see someone transform. Is it Valkyrie? An upgraded Thor-Girl? A Thor-granddaughter? Jane Foster? Sif? Someone new?

I'm guessing the latter, and darn writer Jason Aaron for not revealing all right now. And dang him for still not telling us what Nick Fury whispered to him in the Original Sin series that made him drop Mjolnir. Now he's unable to pick the thing up again, assuming it's because he's unworthy and feeling terribly gloomy

His mother, Freyja, one of the many Asgardians gathered around him on the moon, gets to the heart of the matter - her son is worthy, there's likely an enchantment going on. 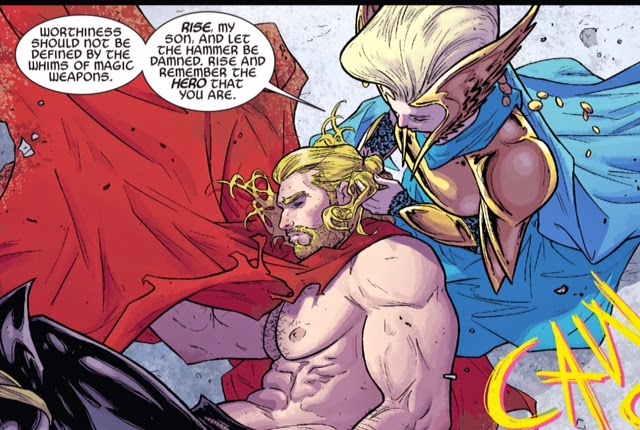 When Odin's creepy messenger Ravens report an attack on Midgard, Thor seems ready to move on, fight with some other weapon. And Freyja likewise would likely leave the hammer and go home, were it not for her being married to a male chauvinist god. Odin's annoying sexism leaves her wondering about the hammer and its gender-specific inscription. Very soon a little tweak has been made to the legend ...

The fact Thor is still worthy of his weapon is evident in his emerging from a days-long funk the minute he hears Frost Giants are menacing Earth. In particular, scientists from Roxxon Oil, who are searching for something in the sea off Norway. It seems the giants want it too.

What's everyone after? Do pay attention, this is Jason Aaron. He's not a giver. We'll find out some big, fat 'eventually'.

The giants have help from elf magician Malekith the Accursed, who seems very comfortable in the traditional Loki role of spellbinding pest. He does, though, manage something Loki never has when Thor shows up to defend the mortals.

As written by Aaron and drawn by Russell Dauterman, the fight is very entertaining as flailing axe - Thor's new weapon of necessity - meets spectacular spells. Matthew Wilson's colours light up these scenes and the rest of this fine-looking issue. Good as Dauterman is at action, he's even better at people, filling his cast members with character. The only tweak I'd make to his art would be the removal of his rather scabby little sound effects - there's a great letterer here in Joe Sabino, he could help. As Sabino also handles production, it's likely he came up with the superb logo - we've seen the hammer used in the masthead previously, but rarely so well. And the image, by Dauterman and colourist Frank Martin, is equally eye-catching.

My favourite players this time are the all-bickering All-Father and All-Mother; I'd love a Mr and Mrs Odin series, in which they snipe their way around the cosmos. Get on it, Aaron.

I was surprised that the Roxxon guys weren't more prepared for undersea weirdness given they're longtime residents of the Marvel Universe, but I'll let that pass - it'd be very boring were all ordinary comics folk as blasé as we readers. And there's so much right with this book. Incidental pleasures include attack sharks and the notion of Aqua-S.W.A.T., a spread featuring marauding Frost Giants and the ever-voluminous Volstagg. It all makes for a thoroughly entertaining Thor - both of 'em - comic, one dripping with action, drama, humour and suspense. Obviously, Thor will regain his hammer and sole ownership of his name in time. For now, dive into a world of imagination and intrigue, and welcome the new Thor.