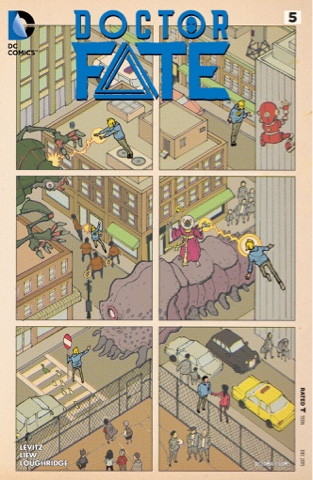 Now there's an eye-catching cover, the latest in a series by artist Sunny Liew. Inside Liew's subject is less whimsical, but the art is just as worthy of your time. Working with writer Paul Levitz, Liew presents a consistent, compelling world for Dr Fate. 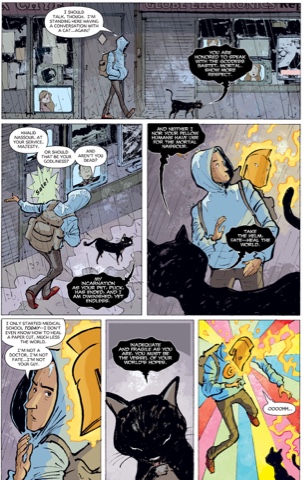 Or rather, worlds, as the book tends to move between the New York of today and the spirit realms of the ancient Egyptian gods. The ongoing story concerns medical student Khalid Nassir, who's had the helmet of Thoth thrust upon him by the goddess Bast to fight jackal spirit Anubis. He wants to cleanse the modern world, finding it 'vile and disgusting', and is hitting the planet with floods. Khalid feels he's in over his head - he's saved a few lives, but thousands have drowned and his father is in hospital, newly blind after an attack by Anubis. 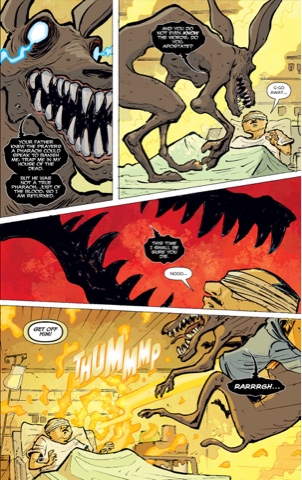 This month, Khalid tries to use his affinity for the elements to stop some looters, before finding Anubis at the foot of his father's bed. 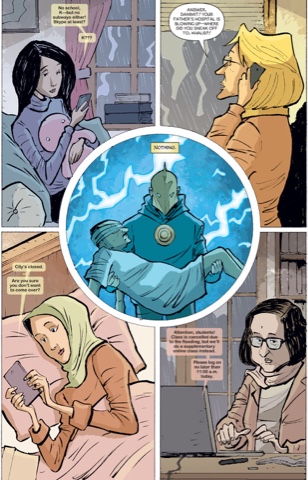 Away from the action, the women in his life wish he were around (I do not like that pushy Akila at bottom left, back off girl!). And finally, the new Dr Fate faces a choice that will make him winner or hero, but not both.
Blah blah with its Egyptian-American hero DC Comics is copying Pakistani-American heroine Ms Marvel blah blah. Maybe they are, but it's more likely a case of both companies sincerely trying to serve a more diverse audience. I really don't care, because it's OK to like both books. They've a similar real-world vibe but that's because in Levitz here, and G Willow Wilson at Marvel, they've both got fine writers, ones able to give their characters real, recognisable humanity. 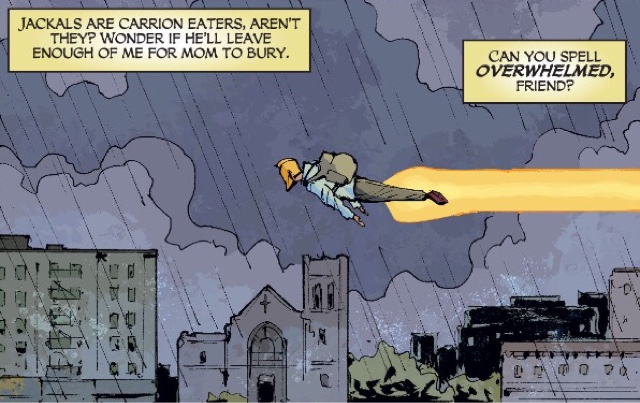 Khalid is as freaked out by being faced with a cosmic destiny as any of us would be, but he's facing up to it, bit by bit, as we all hope we would. As for the distinctly inhuman Anubis, he has a true sense of the uncanny about him, and is, frankly, terrifying.
And that's despite Liew apparently channelling Wile E Coyote when drawing the angry deity. The eyes, the snarl ... this is not someone you would willingly stand against. And yet Khalid does, and Liew captures his, shall we say, reticence in the awkward body language. The urban backdrop convinces, the weather looks suitably biblical and the magical effects enchant. The colourwork is by Lee Loughridge and it's typically good; the same can be said of the letters of Steve (Magic) Wands.
This book will one day be recognised as a true gem.  Do me a favour - do yourself a favour - and buy all the back issues, or reserve the upcoming collection. Dr Fate is consistently one of the best-written and illustrated reads in mainstream, comics.
You don't want me to send Anubis round, do you?
Dr Fate #5 review Lee Loughridge Paul Levitz Sonny Liew Steve Wands