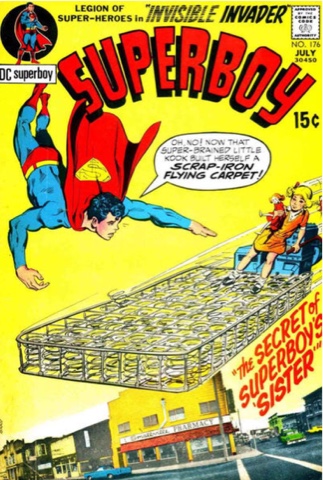 Here's another of those comics I saw as a kid but never managed to buy, but thanks to eBay, now I have it - so was it worth the wait?
I love the cover, it's a real grabber. Super-powered or otherwise unusual kids were a staple of the Superboy strip for decades, and Kathy here makes a fine first impression - cute and already annoying our super-staid hero. It's only now I have the comic that I notice that 'Smallville' is a photograph, and it works rather well. DC used photo-covers occasionally back in the Seventies - Action Comics #419, also by Neal Adams, would be my favourite example - and it's good to find a 'new' one. 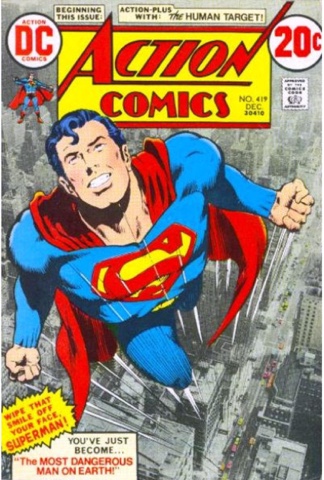 The story opens in dramatic style. Superboy goes out in a storm to check Ma Kent's 'girlhood friend' Lisa Warren and daughter Kathy are OK as they drive into Smallville for a visit. And wouldn't you know it... 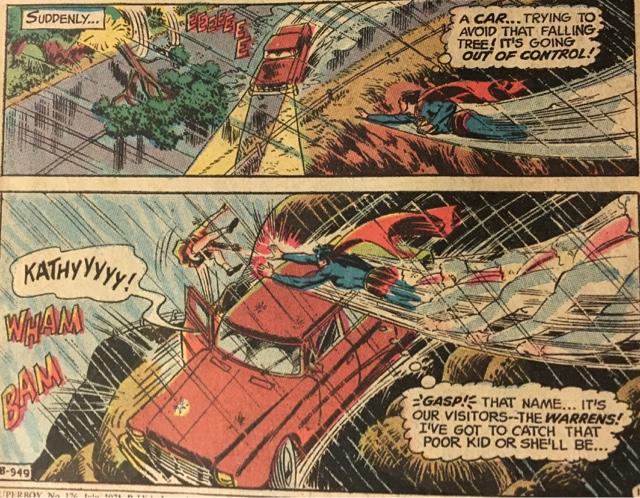 Clark rescues Kathy but poor Lisa winds up in hospital, and her husband is working in South America, so it's up to the Kents to look after the almost-orphan for awhile. Clark initially seems rather harsh. 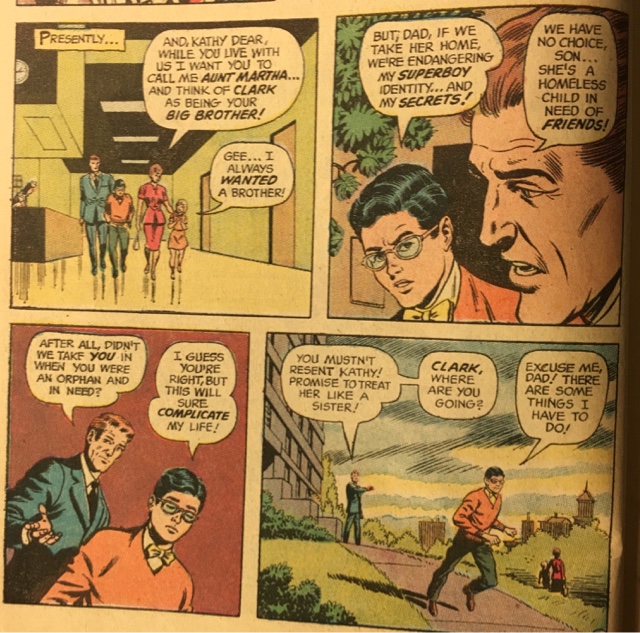 Happily, Pa Kent puts him right and he soon gets into the big brother game. 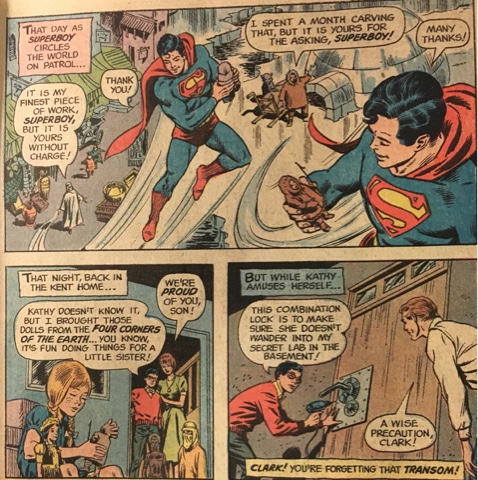 And then one day, Superboy is called into space to investigate an unusual object. 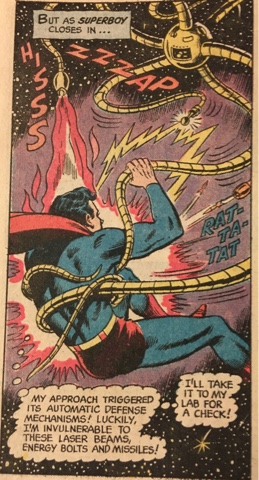 Oh heck, don't you just hate it when that happens? And then, when he's investigating the 'metallic octopus' - this being the days when Clark was consistently a bit of a science whiz - the 'space brain' goes a-wandering.

CLARK! This is the second time in two pages writer Leo Dorfman has been hectoring you! 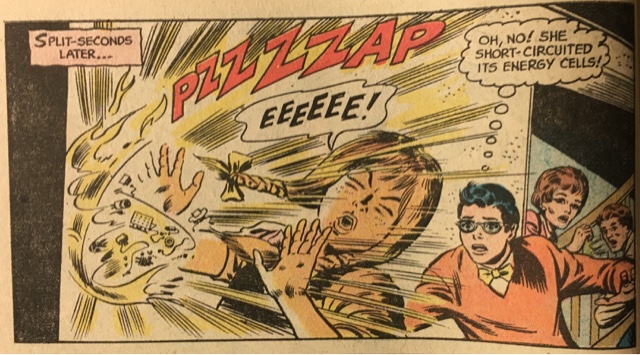 Soon, Kathy wishes she hadn't reached out for the 'pretty balloon'.
No one could accuse the newly teeny-boppered Martha Kent of being a hysterical substitute mom. 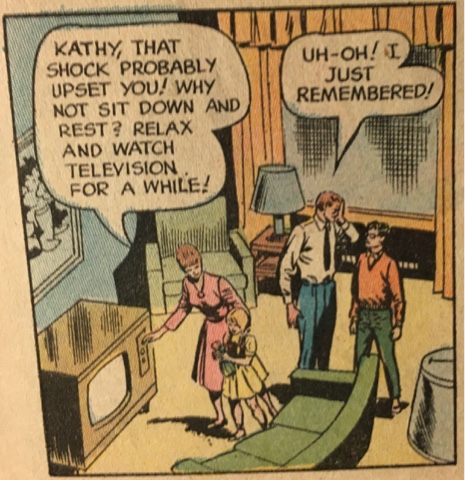 Oh aye, who needs a hospital check up?

Soon she's causing having at school, much to Clark's amusement. 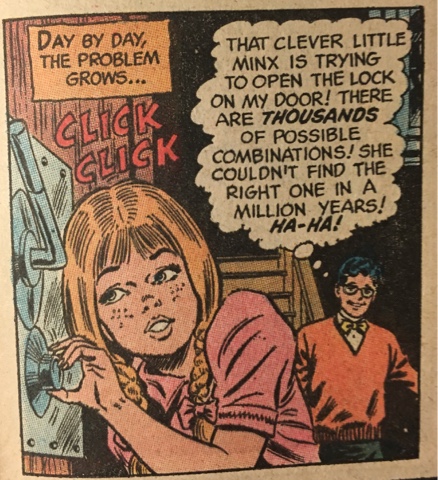 The smile's wiped off his face when she starts snooping like a tweeny Lana Lang. Nothing for it but to keep her close at hand, until her father comes to claim her. So what better than a trip to a junkyard? 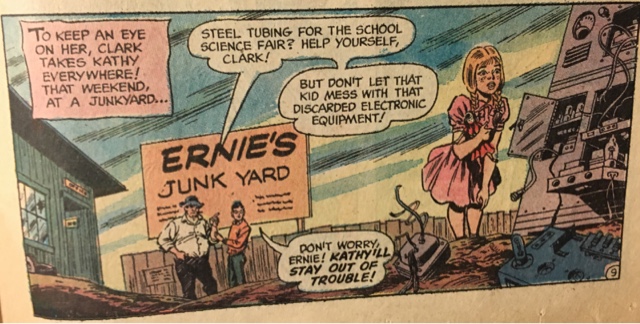 Unfortunately, Clark is called away to the outskirts of Smallville, where the US Army is on manoeuvres, pointing ruddy great rockets at the townspeople. 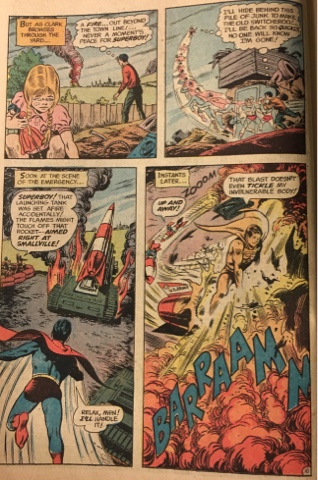 He's not at all perturbed by this, but freaks out somewhat at the latest evidence of Kathie's brainpower. 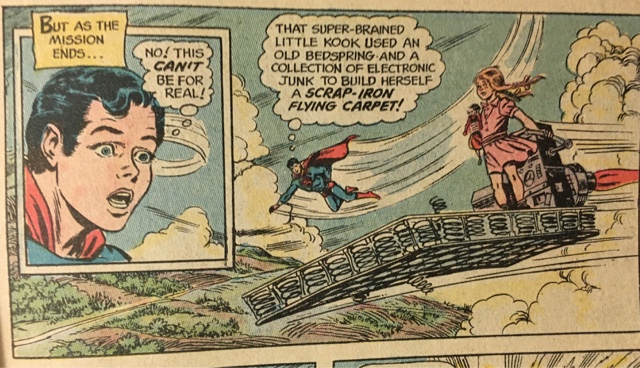 I'd be hugging that kid, how entertaining is that? 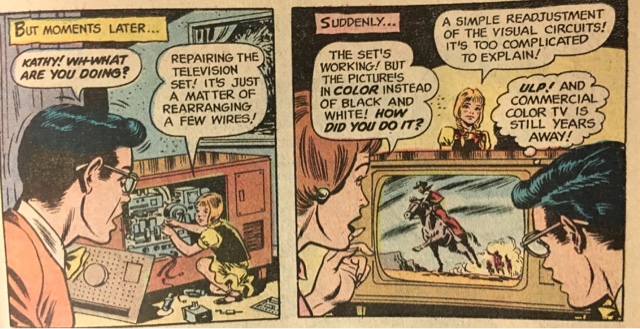 She even turns the Kents' TV into a colour set, years before anyone is actually transmitting in colour. Why would he not want her around? 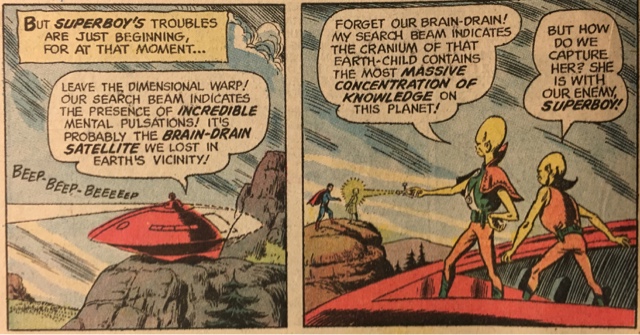 These guys may look like those happy wee aliens who gave Buddy Baker his animal powers, but they're all-round bad guys, ones Superboy has trounced previously.

I don't think readers ever saw that happen in a previous comic, but how great is it that our boy organised a revolution? Now they're back, and rather formidable. 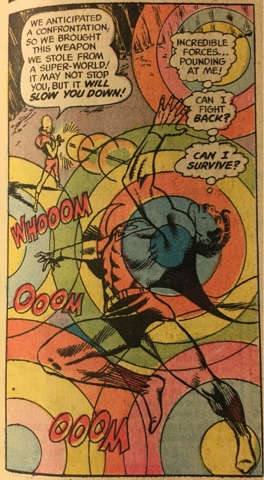 Who can stop them? Only chatty Kathy - with one of the dolls Clark gave her! 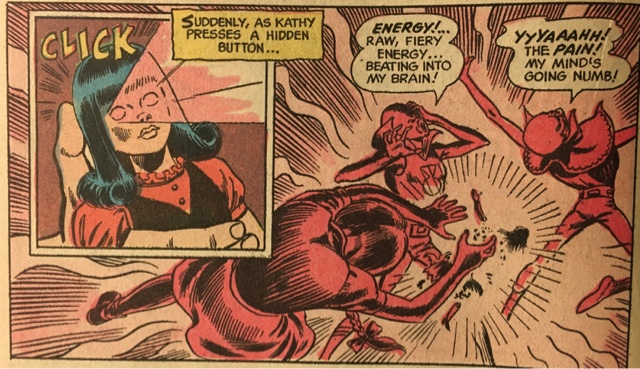 Sadly - well, happily for Clark, who doesn't trust Kathy to keep his identity secret - she's shot her load, brain-wise. She's back to being an ordinary girl and Dad shows up to take her home. 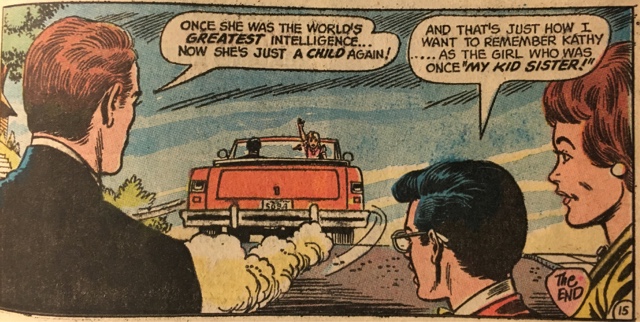 It's a cute story from Dorfman, with typically nice art from fellow veterans Bob Brown and Murphy Anderson. As well as the effective action sequences, they pay attention to the quieter moments, ensuring the storytelling is always spot-on. And they draw kids who look like kids, rather than giving us adult heads on smaller bodies. 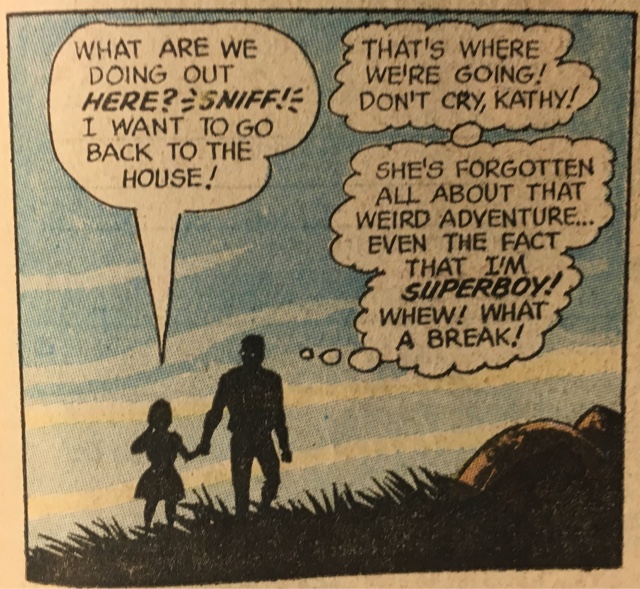 How's this for a nice silhouette scene? Ignore the fact that Clark seems to think Kathy's lost her brains but gained the ability to read his mind. 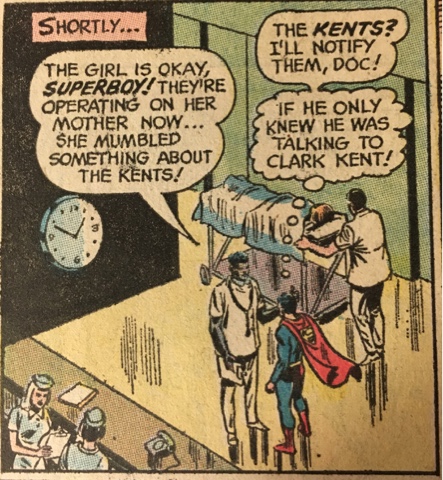 I do like that the doctor at the hospital isn't a white guy. There's no story point being made, it's just the creators noting that some doctors happen to be black.
I love the colouring, it's understated, which helps set the nostalgic, pastoral tone, but  blows hot when demanded by the story. Sadly, there's no credit.
Backing up the main feature is a Legion of Super-Heroes short in which Invisible Kid must learn how to defeat 'himself'. A thief has duplicated his powers and can't be allowed to remain on the loose.
Writer E Nelson Bridwell has just seven pages to play with, so he gives us a tight character piece, while finding room for the best meditation I've seen on comic book invisibility. 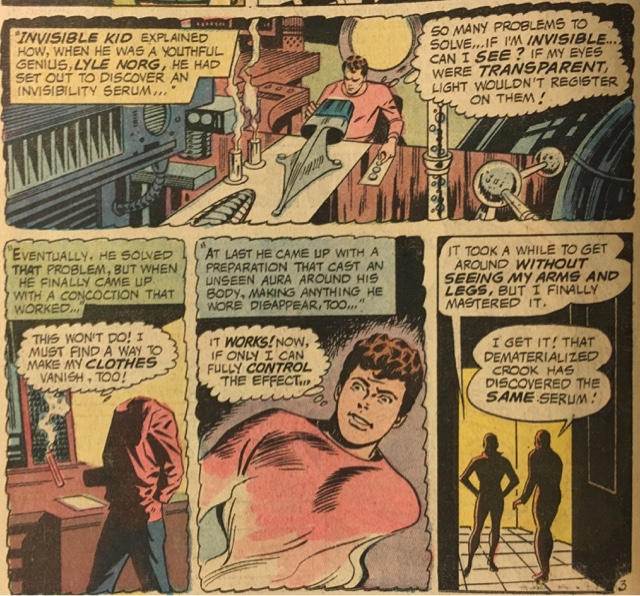 I'm used to liking George Tuska swathed in Vince Coletta, but here he handles the whole job himself, and the opening Superboy head apart, I rather like it; it's unshowy in its simplicity but the facial expressions are great - look at poor stressed Invisible Kid, and shadowy, worried Mon-El. Oh, the drama! 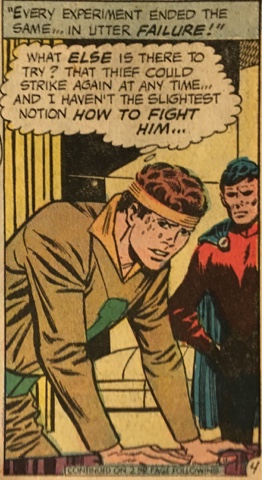 I do admit that the 'multiple time cube' could use a little imagination. 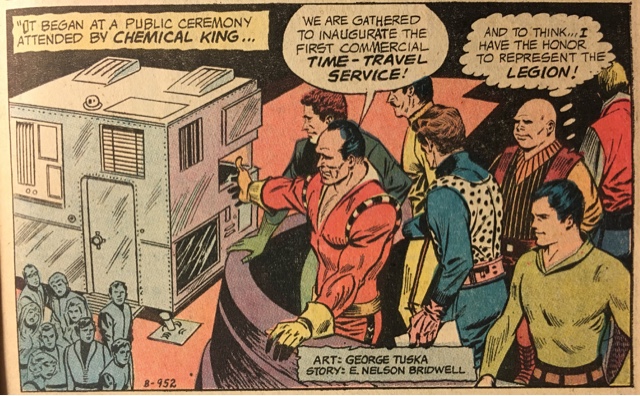 'Invisible Invader' is a smart short, and a welcome spotlight on two of my favourite Legionnaires, Invisible Kid and Chemical King. 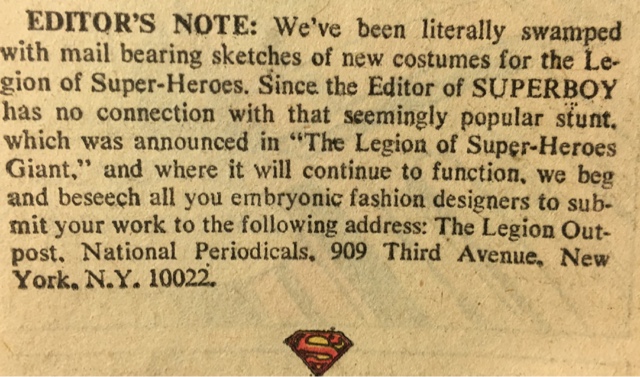 Ah, how I miss letter pages.
All in all, if you like Superboy and the Legion - and doesn't everybody? - and come across this issue cheap, give it a go, it's pure fun.
Bob Brown E Nelson Bridwell George Tuska Leo Dorfman Murphy Anderson Retro review - Superboy #176 (July 1971)