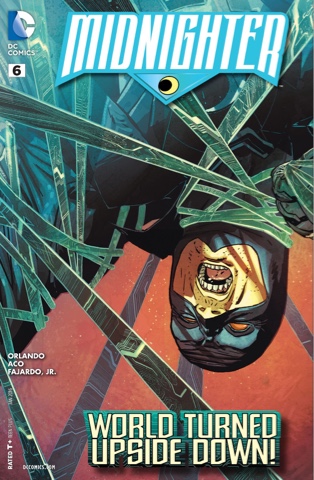 As we join the Authority's enhanced urban vigilante, Midnighter is taking a break from his quest to learn who plucked the technological 'flowers ' from the God Garden. Dinner with boyfriend Matt is interrupted by an aerial attack - the boys are OK, but Matt's flat is wrecked. What to do than go country hopping together while repairs are made? This being Midnighter, the countries tend to be the ones where there are people to beat up in his search for information as to who his unknown foe is. 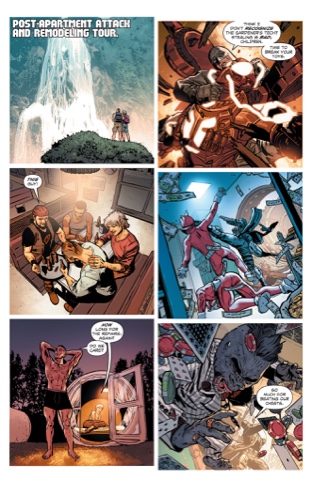 When they return to Oakland, California, and a lovely remodelled duplex - well, lovely if you like big open-plan glass boxes - there's some bad news. Having failed to get at Midnighter by murdering Matt, someone has attacked his father...
This issue takes a crack at one of the oldest questions for superheroes. Can I let anyone get close to me? What's the cost to them? What's the price I pay? Despite his name, Midnighter isn't one to play it subtle, he's not going to date Matt in the shadows, so he's putting a big target on an ordinary human's chest.
Writer Steve Orlando takes the idea and runs with it, showcasing our hero's skills, personality and world, making this an ideal jumping-on point. And the cliffhanger - I really didn't see it coming - pretty much guarantees new readers will be back... especially if they're longtime DC fans. Orlando is succeeding where others have stumbled, making a Wildstorm character feel as if they've been in the DC Universe all along. From the recent team-up with Dick Grayson to this issue's guest villain(s) Multiplex to the final page appearance of (sorry, not telling!), there's no doubt where Midnighter lives these days.
What makes the story more interesting to me is that, actually, I'd be perfectly happy for rich guy Matt to get killed. He's so very bland, not someone I'd expect a delightful loony like Midnighter to be in a relationship with. Sure, he's pretty, in a needs-a-haircut way, but not exciting. Then again, it could be that Midnighter - I can't ever think of him as Lucas - wants a contrast to his last guy, fellow superhero Apollo.
In which case, he should stop dragging Matt into his world, keep their thing separate. As this issue makes clear. 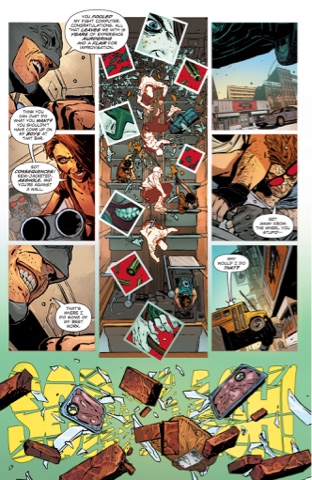 As well as the sparky script, Midnighter #6 sees the return of artist Aco. His pages are beautifully bonkers, full of vertiginous shots and inset pics conveying Midnighter's computer mind. The action sequences, replete with afterimages showing our hero's amazing acrobatics, are outstanding, while Aco's knack for dressing folk in recognisably modern clothes and placing them in hi-tech interiors makes the book seem 'now'. Completing the art team are co-inker Hugo Petrus and colourist Romulo Fajardo Jr. The result is a book that's sleek without being soulless.
The cover, by Aco and Fajardo, isn't the grabbiest of images, but they can't all be winners.
If you've yet to give Midnighter a try, take a chance on this issue. It's a blast.
Aco Hugo Petrus Midnighter #6 review Romulo Fajardo Jr