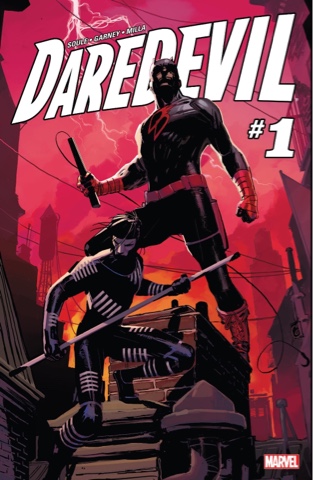 Daredevil is back in the dark. He's swapped sunny San Francisco for gloomy New York, he's wearing black, and everyone this side of Foggy Nelson has forgotten his secret identity. Matt Murdock's best friend is back in the Big Apple too, and far from delighted that he's immediately dragged back into the Man Without Fear's deadly world. 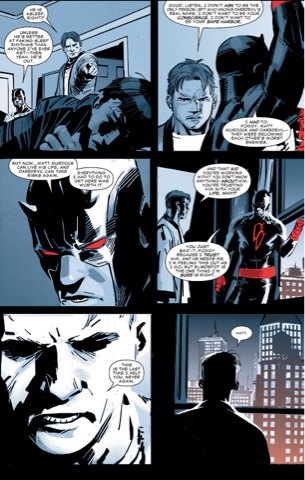 Because he's not without fear. He's an ordinary guy who has nearly been killed dozens of times due to his loyalty to Matt. Foggy's recovering from cancer, trying to get his life back. So when Matt dumps an underworld informant he's just saved from a gang-cum-cult in his apartment, yeah, he's angry. But as ever with Foggy, his loyalty to Matt trumps all.
Matt seems to be falling back into old ways as this new run of Daredevil kicks off. Under last writer Mark Waid, he was thinking more clearly than he had in years. He was open with Foggy and girlfriend Kirsten McDuffie about his feelings, trying to find the happy swashbuckler he once was while dealing with his issues. Here, we're back to the grim vigilante, thinking of little beyond the immediate case.
Said case sees informant Billy Li poised to reluctantly give evidence against the Tenfingers Gang for New York Assistant District Attorney Matt. Various questions arising from the previous series go unresolved. Why he jumped over from the defence side of the legal profession, what brought him back home, where Kirsten is, what the heck Daredevil did to make the world forget his real name...
Did he make a deal with Battleworld God Doom? Satanic entity Mephisto? Writer Charles Soule keeps things moving so quickly that there's not really a chance to dwell on this rather massive question, left hanging by Marvel's failure to finish the Secret Wars series in good time. There's a new sidekick, Blindspot, to introduce, for one thing. He's apparently Chinese American, has a suit of invisibility, and has gained Matt's trust so speedily that Foggy is, understandably, uncomfortable. He's certainly good in a fight. 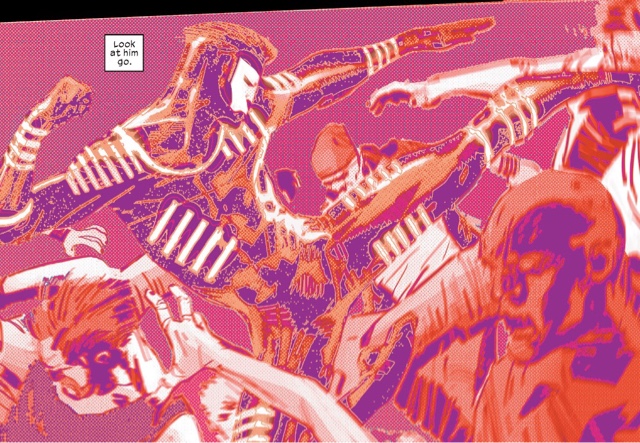 I can't say I'm thrilled to have Matt back in New York and tangling with gangs. Been there, done that, worn out the tee shirt. And if Kirsten is gone, and staying gone, that's a big loss as the chemistry she had with Matt and Foggy was a delight. I realise accepted wisdom says a hero who's happy in his personal life doesn't make for good drama, but Soule is a good enough writer to make a lie of that. He's so capable that he deserves an issue or two to show me where he's going; it's not like I didn't enjoy this one, with Soule's understanding of radar sense and the Foggy scene among the highlights. 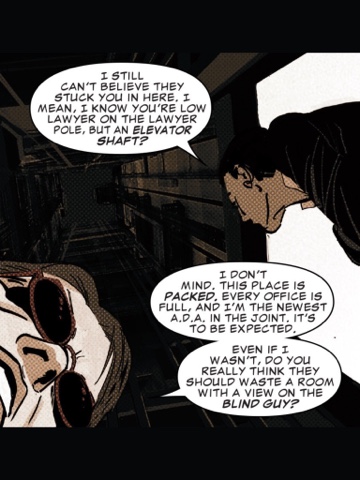 Matt's new office is a bit of a statement, while the return of secret ID hijinks just makes me happy. And of course, Soule being a lawyer by day means the legal stuff feels very real. 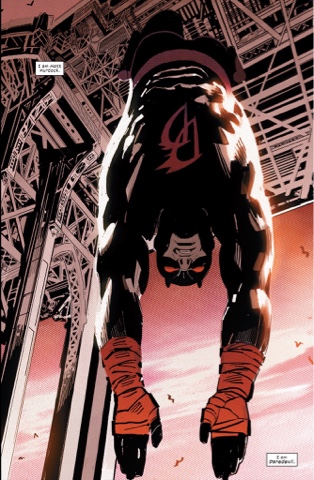 Veteran Ron Garney handles the art, demonstrating once again that he's one of comics' most adaptable craftspeople. His compositions and figurework are as strong as you would expect, while his experimentation with textures evokes the great Klaus Janson. The opening image is suitably eye-grabbing, a declaration that Daredevil is in good hands. Hugely talented colourist Matt Milla goes for muted, almost monochromatic, tones. This makes the occasionally flashes of red or green pop, but I'd prefer a more naturalistic palette. Completing the core creative team is Clayton Cowles, providing letters and handing production.
It's great work from everyone. I'm not sure the new Daredevil will turn out to be for me - I'm still mourning the loss of Karl Kesel as writer - but I've no doubt this will be a strong series.
Charles Soule Clayton Cowles Daredevil #1 review Matt Milla Ron Garney