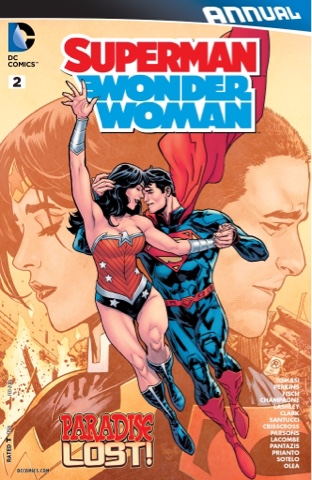 The big problem I've had with the Superman/Wonder Woman romance is that I just didn't believe it. They seemed to have nothing in common other than their role as superhero. Now, just as they've broken up in their regular book, we get an extra-length look back at moments in their relationship.
The framing sequence has Superman at the old Kent homestead, in the present day, looking at pictures of his parents in their younger years. 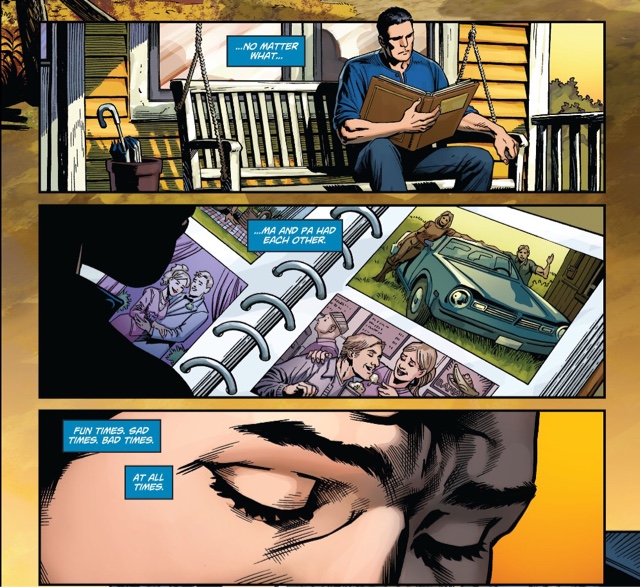 Cue scenes from his recently ended romance with Diana: early on, they're in Washington DC, taking a breather after a team-up, before Superman visits the Kents graves to tell 'them' he's made a big decision.
Then we're in Atlantis for dinner with long-established couple Aquaman and Mera. After the meal, Arthur and Clark talk JLA battles while Mera and Diana go for a swim around the city. Diana tells Mera how difficult it is for her and Clark to be together, but Mera isn't having it - if you choose to be together, you make it work. 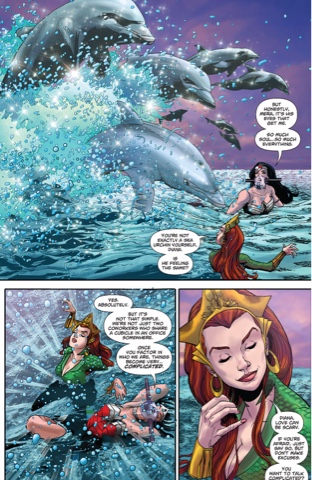 Next, Diana takes the lead as the latest in a long-line of cretinous relatives tries to make a name for themselves. Afterwards, Clark is upset that Diana has accepted the mantle of war god, how can she reconcile it with her role as a fighter for peace?
Further down the line, Clark has used his new solar flare power and so is spending a day as a regular person. Diana is called away to save lives and insists he remains behind, quite reasonably pointing out that accompanying her would be too dangerous for him. Clark, though, thinks he's Batman, as capable a hero without powers as with. The sequence closes with a montage of recent scenes showing that, with everything from the Atlantis War to Super-Doomsday to the loss of Superman's secret ID, there's not been a moment's peace.
There's never been time, as we learn on the final page - a continuation of the opening sequence - for Superman to get out the ring he's been carrying around and ask Diana to marry him.
OK, no surprise there, it's been obvious from a few pages in that he wanted to propose. And given how early in the relationship his visit to the Kents' graves comes, the very idea makes Superman seem incredibly impulsive, awesomely stupid, or both. I just don't credit it, even though Peter Tomasi does write some nice dialogue for Diana and Clark in the Washington flashback. And Marco Santucci and Michel Lacombe give us some beautiful art, enhanced by the colours of Beth Sotelo, helping to sell the idea that the pair are having fun together. And they nail the sadness Superman feels at the end of the affair.
Keith Champagne writes and ChrisCross draws the fabulous Atlantis sequence. Mera's straightforward wisdom is a nice contrast to Diana's wishy washy worries about even telling their fellow heroes she's dating Superman. Leonardo Olea is a colourist I've not come across previously, but if the Aquaman editor has any sense, he'll be on the phone to Olea right now.
K Perkins, who co-wrote the last several issues of Supergirl so classily with Mike Johnson, looks after the battle with disposable demigod Dichara and its aftermath. The sharp scripting - with the discussion about Diana's new war god status especially fascinating - demonstrates that DC should re-sign her to a regular book. 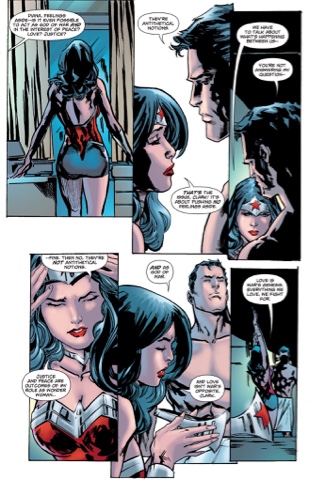 And ignore Diana's ugly-ass arse in that first panel, Ken Lashley's art throughout the sequence is generally first class; the characters are good looking, the action dynamic, the emotions compelling. The colourist is Pete Pantazis, and his work is as effective and attractive as always. 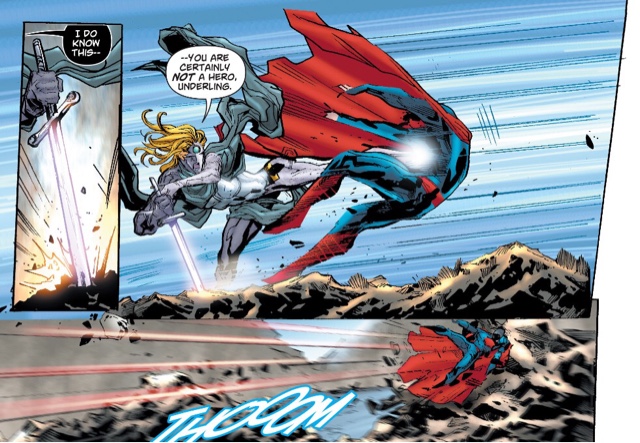 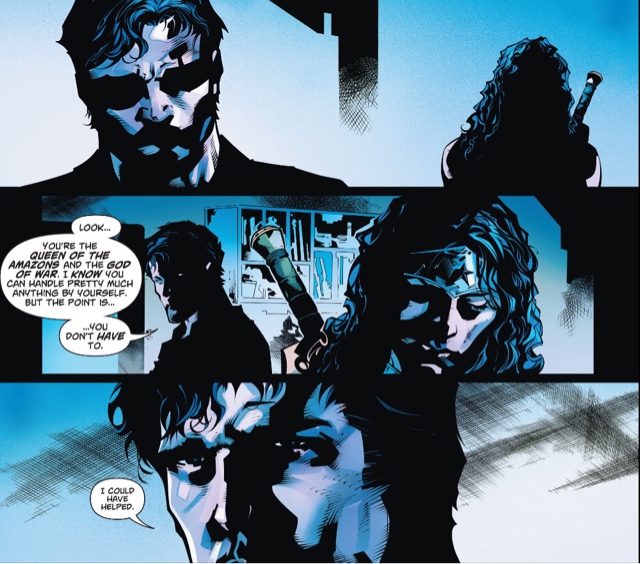 Sadly, as the mood darkens on Diana's return from battle, Clark's work with inker Sean Parsons goes way overboard on the shadows. Colourist Jessica Kholinne, though, impresses hugely with her mastery of blue tones. (Oh, and I seriously want to see the creative team give us the whole of the JLA and Deadman's team-up against the Galactic Golem, shown as a throwaway flashback but looking epic.) 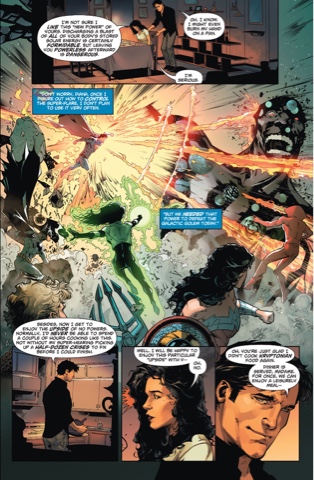 Yanick Paquette and Nathan Fairbairn provide an attractive cover - I'd love to see what they could do if allowed to use the heroes' classic costumes. (And while uncredited, Paquette produced the issue's layouts - check out his Twitter feed for a page deemed 'too sexy' for the issue @YanickPaquette.)
Altogether, this is a great-looking, great-reading look at why the Diana/Clark relationship was doomed from the off. If the book is a coda to a story that's over and done with, fantastic. If it's a precursor to a rekindling of the relationship, well, it's still a darn good superhero comic.
ChrisCross K Perkins Keith Champagne Ken Lashley Marco Santucci Matthew Clark Michel Lacombe Peter J Tomasi Sean Parsons Sholly Fisch Superman/Wonder Woman Annual #2 review