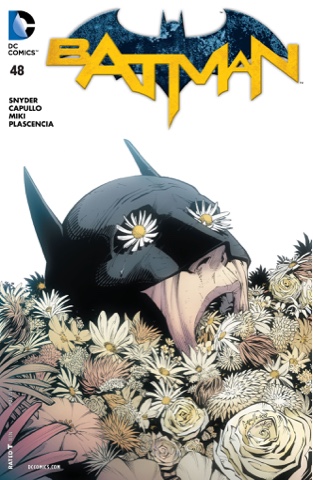 Gotham City is becoming Bloom County. Twisted plant villain Mr Bloom is taking over the streets, having captured Jim Gordon's Batman. And across the city, Bruce Wayne's calm moment on his favourite park bench has been interrupted by a stranger. A stranger who looks like the Joker. And talks like the Joker. 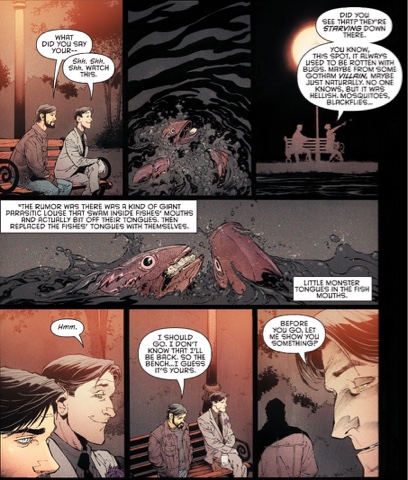 Writer Scott Snyder doesn't give Bruce thought balloons, or internal narrative boxes, so we don't know exactly what he's thinking. Penciller partner Greg Capullo, though, writes the story on Bruce's face. The truth of his past as Batman has been dawning on him, and apparently the greatest enemy of the man he once was, of Gotham, is beside him, dripping with double-talk and holding a gun. He wants to go, but he has to hear what this dangerous man has to say.
The man on the bench seems to sense Bruce is being pulled towards his former self, and looks to be trying to persuade him to embrace life as a non-heroic civilian. (Good luck with that; Bruce has seemed like an empty shell since returning from 'death' without the trauma of remembering his parents' murder, dead-eyed - he needs to be Batman.) 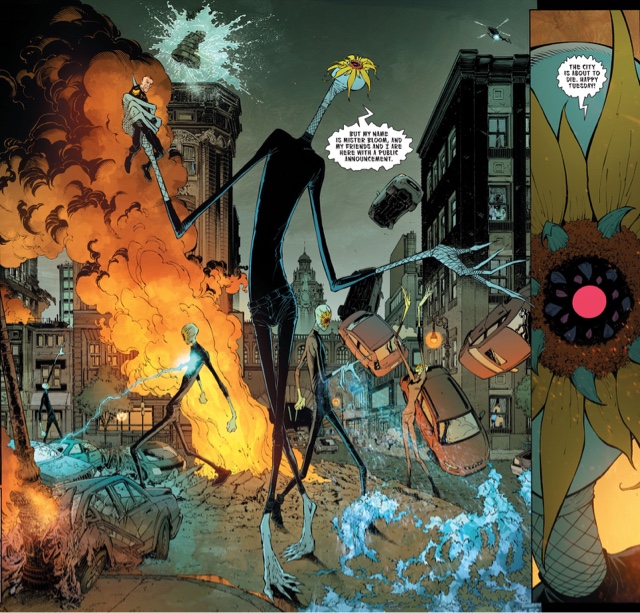 By gum, the (likely) Joker talks a lot, but he's got nothing on Mr Bloom. A two-storey tall tornado tearing through Gotham, he offers one of his super-juiced seeds to any of a thousand individuals who can find them. Why anyone this side of sanity would want to be an elongated weed is beyond me, but Mr Bloom's tongue is as silver as it is long. 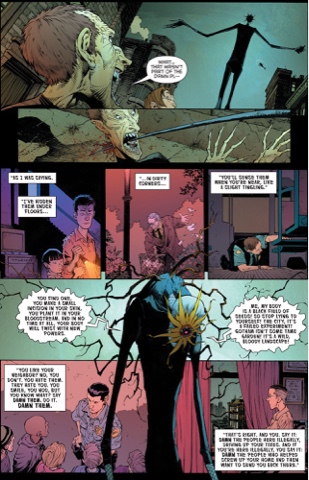 It's Network meets Poison Ivy, and some people are buying his nonsense - mind, this is Gotham, where all the Apocalypse means is 'Tuesday afternoon'. And eventually I started enjoyed Mr Bloom's loony rant
The big question is, will the situation be enough to bring back the real Batman?
As for fill-in Batman Jim Gordon, he doesn't have a great deal to do here and I don't miss him being at the forefront of the action. While he's had some great dialogue during his stint as tin Batman, Jim belongs on the streets, with trenchcoat, mustache and a haircut befitting his age and station. Jim doesn't need to be Batman to be compelling and Snyder knows it.
We're into part eight of Super-Heavy and while I'm more than ready for Bruce and Jim to return to their regular roles, and for shorter stories, I've not been bored. Snyder knows exactly where he wants to go and he paces his narrative extremely well, giving the various beats what they're worth.
As for the Joker, if he returns in all his gruesome glory, I hope he then buggers off for a couple of years. Fascinating as he is under Snyder and Capullo, enough is enough.
Capullo is the modern master of Gotham visuals, peopling his streets with nicely individuated citizens and beautifully bizarre bad guys. I love that, to use the film term, there's deep focus - you can see right to the back of the panels, where trash cans leak rubbish and people gaze from windows; the smallest street gains epic scope. Danny Miki and FCO Plascencia enrich Capullo's work, their inks and colour adding impact and mood, selling the calm scenes and ensuring the horrific moments pop. Steve Wands completes the core creative team, his unobtrusive, sharp lettering a vital part of the equation.
Capullo, Miki and Plascencia contribute a gorgeously creepy cover - has a daisy ever looked so sinister?
Batman is a big seller for DC, and with issues like this, it's easy to see why.
Batman #48 review Danny Miki FCO Plascencia Greg Capullo Scott Snyder Steve Wands