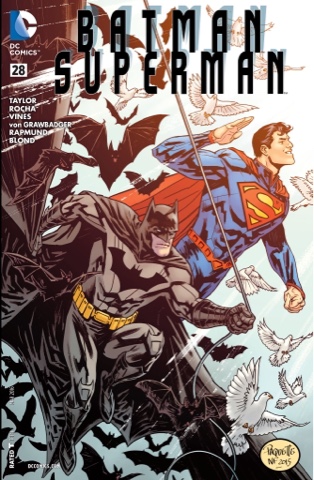 There's a giant on the moon. A dead giant. Superman needs Batman's investigative skills to help solve the mystery, so goes to Gotham to find him. The Caped Crusader is in the middle of a fight with Clayface, so might be expected to be grateful for a super-hand. 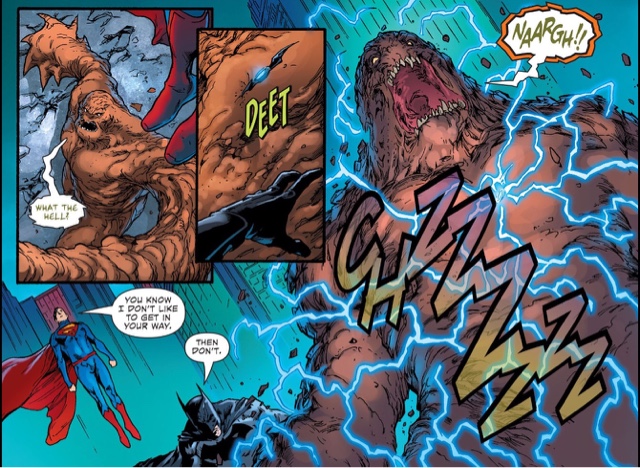 Not so. And Batman doesn't cheer up when Superman takes actor-turned-monster Basil Karlo back to Arkham Asylum. 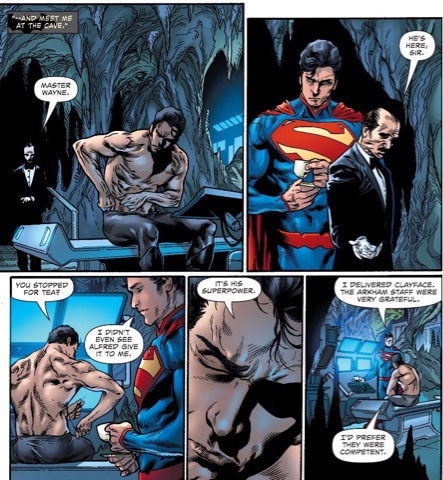 Still, Bruce loves a mystery so is a tiny bit less miserable by the time Clark and he are on the moon.

But not much...
This issue of Batman/Superman is in untold tale mode and it's lovely to see an almost fully loaded Man of Steel - he can't breathe in space just yet, but he's much mightier than the current version. I'm less thrilled to see quite such a bad-tempered Batman. Why Superman bothers with him I have no idea, he should go find some other mystery solver, Elongated Man, Angel and the Ape or Detective Chimp, say. Anyone but this negative nelly. I know this has been the early years Batman/Superman dynamic for decades now, but it still jars. World's Finest, the series on which this comic is based, was always 'your two favourite heroes together'. Why would this pair ever seek out one another? This Batman is a lone wolf to a lunatic degree, seemingly jealous of any other hero who so much as enters Gotham. DC seems to have forgotten that it is possible to contrast Superman and Batman without a big element of dislike being present.
Rant over. There were lots of things I liked in Tom Taylor's script. The aforementioned SUPERman. A recognisable Commissioner Gordon. Good ol' Clayface. The mystery. A surprise guest star.
Robson Rocha's pencils are another plus, telling the story in a clear, dynamic manner. The Clayface skirmish is a treat, Superman looks excellent with the kiss curl present and the guest star looks good. And he gives Batman's spacesuit a cape! 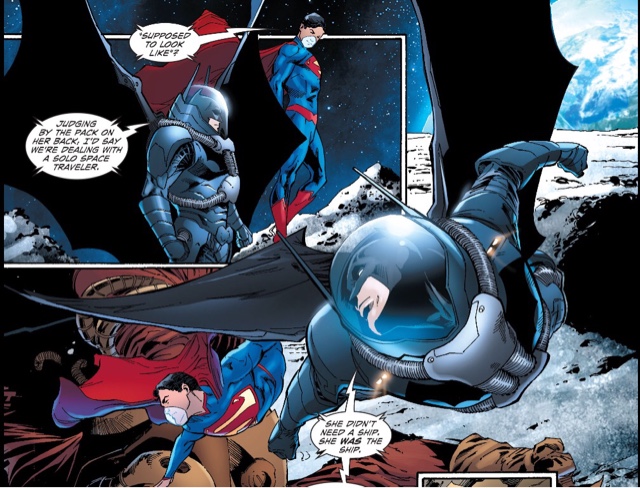 The reveal of the alien is eyecatching, though the combined Superman/Batman logo appearing in moondust is misleading, it's not actually there in-story. I suppose Rocha expected this to be the credits page, but that's his fine Superman splash a few pages earlier. It's a very nice page, lifted immensely by letterer Rob Leigh's Art Deco title treatment. Batman also gets a nice entrance splash, though poor Alfred looks to have shrunk in the wash.
The inking trio of Dexter Vines, Wade von Grawbadger and Norm Rapmund gel nicely, aided by the colours of Blond. Yanick Pacquette draws the cover, Nathan Fairbairn colours and it's rather lovely, with the contrast between bats and doves.
This story will continue for a few issues - presumably as long as it takes to fill a trade paperback - and boorish Batman aside, I'm expecting big, daft Bronze Age fun.
Batman/Superman #28 review Blond Dexter Vines Nathan Fairbairn Norm Rapmund Rob Leigh Robson Rocha Tom Taylor Wade Von Grawbadger Yanick Pacquette