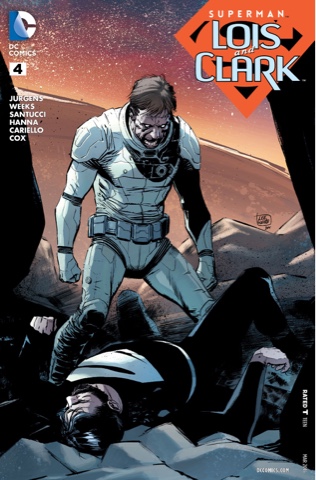 It's several years ago and Lois and Clark Kent are visiting the post-Flashpoint Metropolis for the first time. Clark is all about how much darker it is than the city they knew, but Lois has a different perspective. 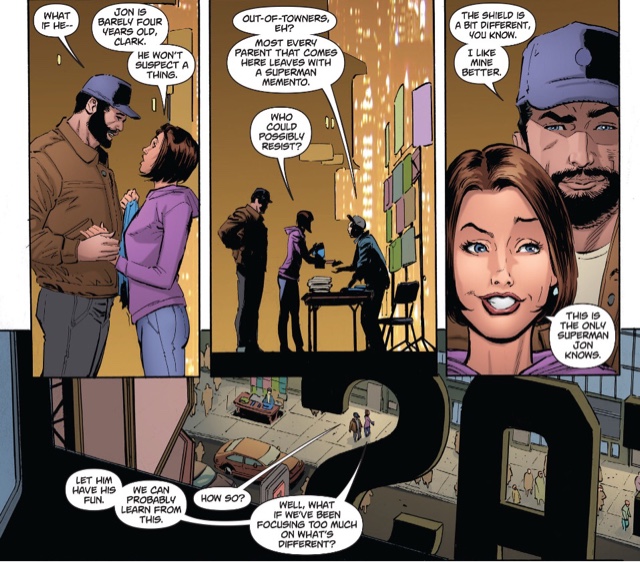 Despite his beard, Lois being a brunette again and their being older than their counterparts on this world, the post-Crisis Superman is a little paranoid about being recognised. So while he and Lois get a kick out of seeing a Jimmy Olsen on the street, it prompts them to retreat to their hotel. There, Lois has a gift. 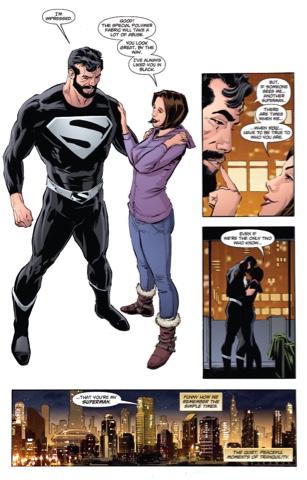 In present day California, Lois is investigating the disappearance of her literary agent. She's been writing bestselling exposes of corruption and only Cora knows Lois is 'Author-X'. What she finds, and a not-so-chance encounter with this world's version of Intergang chief Bruno Mannheim, makes Lois realise she and son Jon, having survived a recent kidnapping, are still in big danger.
Across the planet, mental maniac Blanque attacks Superman in his Fortress of Solitude, with the aid of astronaut Hank Henshaw, whom Superman has had locked up. Being the counterpart of the genocidal Cyborg Superman back on the world he knew, and having survived a space accident similar to the one that Henshaw suffered, this version is deemed a big risk by Superman.
It's the fourth issue of this eight-part mini-series and already I'm mourning its ending. Dan Jurgens uses his long experience as a Superman writer to give us a wonderfully familiar Lois and Clark. Unlike the constantly changing post-Flashpoint pair, this Man of Steel and Girl Reporter can be counted upon to act in ways that make sense. Of course Lois would brazen it out when she meets Mannheim. Of course Superman wouldn't lie down after last issue's surprise attack masterminded by Blanque.
As for Jon, created for this series by Jurgens and artist Lee Weeks, he continues to be an asset to this book, his Lois-like curiosity promising interesting times to come. 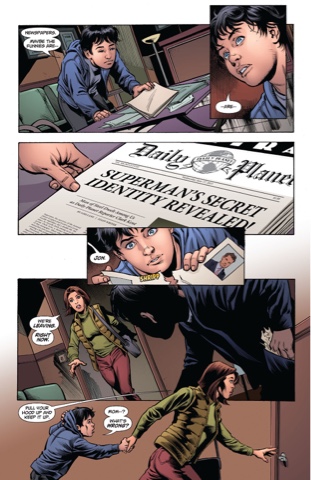 I would quibble with a couple of the story choices - the main one is Superman basically imprisoning a version of Henshaw who has done nothing wrong... the monster he knew went nuts because of things that haven't occurred in this universe. And that pair of S-shields on the costume Lois gives Clark is hardly conducive to ensuring no one connects him to the local Superman. She tries to justify the motif, but really, there's no in-story explanation that would work.
Mind, we've not had the whole story: Superman could have some 'splaining to do when Lois learns about Henshaw, and those identifying marks may well come back to bite him on his super-bum.
Lee Weeks isn't the sole penciller this time, with Marco Santucci also on board. And given I can't say for sure who did what - it looks like Weeks handles the front of the book, Santucci the Fortress fight - I'd say they're a good match. The storytelling is sound, emotions are portrayed with subtlety or broadness as required, backgrounds are convincing, the action is authentic ... Santucci recently contributed to Superman/Wonder Woman Annual #2 and I'd love to see him given a regular assignment. Inkers Sergio Cariello and Scott Hanna were around last issue, and here they are again, bringing the sharpness and sheen. I especially like this page - Santucci and Hanna, maybe? - which has a Brian Bolland finish, to my inexpert eyes. 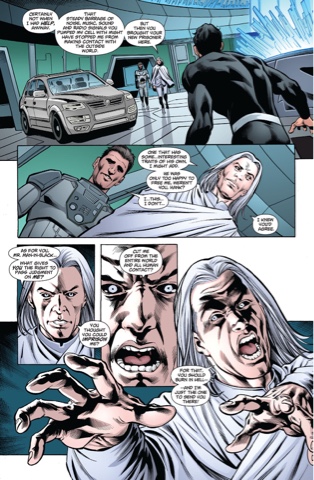 (Can anyone explain that car souvenir in the Fortress? Presumably it's not from Clark's old continuity... how would it have gotten over here? Maybe his new world equivalent of the Action Comics #1 cover car?)
Add in the handsome hues of Jeromy Cox and fabulous fonts of A Larger World Studios and we have one good-looking comic.
And it's a comic I hope gets a fresh order after this too-short run - a superhero book this assured has a place at the forefront of the DC line, not the margins.
A Larger World Studios Dan Jurgens Jeromy Cox Lee Weeks Marco Santucci Scott Hanna Sergio Cariello Superman: Lois and Clark #4 review