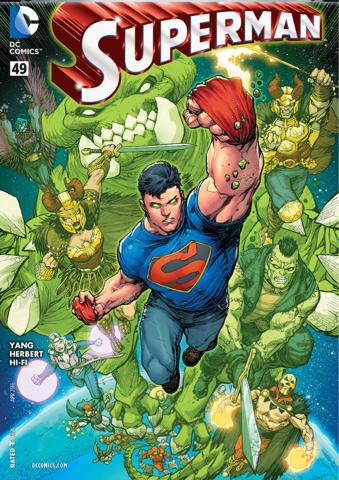 The battle with Vandal Savage goes on. It feels like it's been going on all my life. And maybe a few lifetimes prior to that.
But with this issue, it really feels like things are wrapping up. Superman and Wonder Woman are joined by Metallo, the Man With the Kryptonite Heart, as the latest twist in Vandal Savage's plan unwinds. Using energy stolen from Superman and the Justice League, he snags the comet which originally gave him his strength, and puts it in orbit around the earth. The energy of the glowing satellite empowers regular folk who never suspected they were the spawn of Savage. 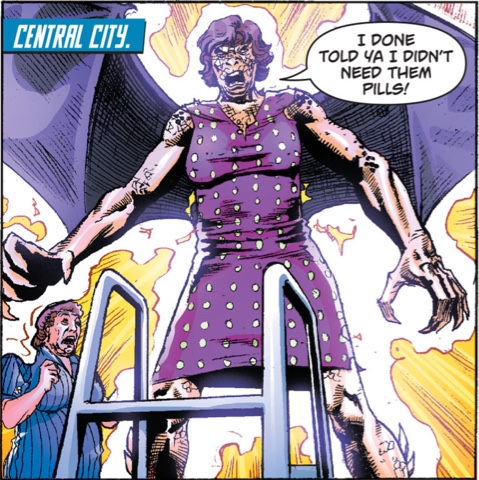 Love that panel. The comet also seems to tinker with the heirs' minds, as they seem awfully keen to prove their love for their new relative by attacking Superman. Luckily, Superman gains extra allies as Mr Terrific rallies the wrestling gods of Oakland, monster boy Baka and more.
Why is longtime villain Metallo on the side of the angels? Because he considers himself 'Lois Lane's personal bodyguard' and she wants him to help. And given Superman is currently depending on green Kryptonite energy to give him super-powers, having a portable power battery who happens to pack a punch is a great help.
In order to keep Metallo in the battle arena, Lois jumps in from the sidelines, bringing her face to face with Superman for the first time in weeks. He's been angry at her for the supposed betrayal of his secret identity. 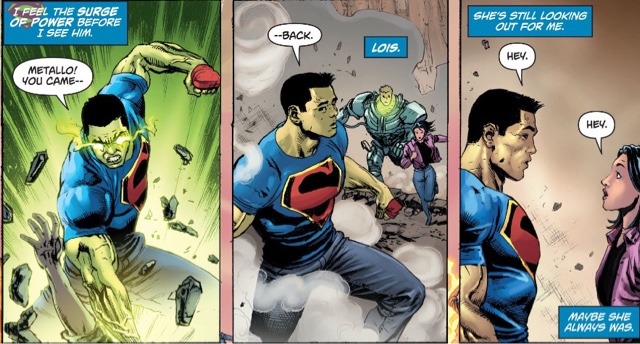 At last. Time and trials have given Clark perspective. While Diana considers she and Superman unfinished business, i reckon she's fooling herself.
That apart, Wonder Woman is on good form, acting like the heroine of old rather than the slash-happy warrior of recent years.
And Superman? Apart from an understandably big old scream when he frees himself from a sticky situation, he's recognisably the cool-headed hero. And he even inspires, as a Superman should do. I won't spoil the scene in question, but it may be the best of writer Gene Luan Yang's run.
The story doesn't end here - big surprise - but I'm OK with that. We know it wraps in the next couple of months, in time for DC's linewide Rebirth, and meanwhile we get a thoroughly enjoyable issue that balances characterisation and action with aplomb, and even finds room for the odd gag. 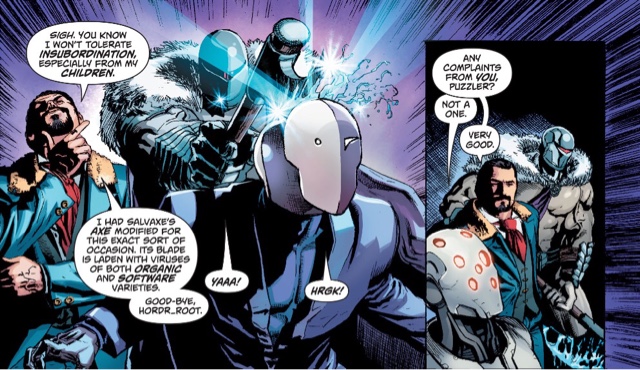 If he were released from the burden of crossovers, Yang could likely give us a really sharp Superman run. 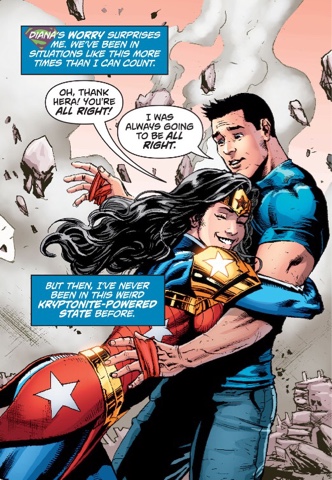 It's all drawn wonderfully by Jack Herbert, who just needs a regular project to make him a star. Herbert's people look great - Clark becomes hugely cute, Diana looks as good as she possibly could in the ridiculous current outfit, Savage has a dark humour - and Herbert has a real talent for composition, going bigger as events escalate and always nailing the moment. 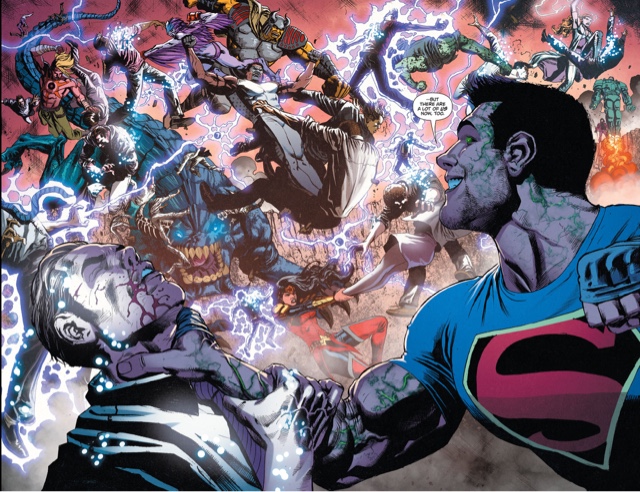 The final splash panel - no spoiling from me - is one of the most dynamic images I've seen in ages, jumping off the page with sheer power. I love Herbert's work and hope DC Rebirth gifts him a regular assignment - he's a pinch hitter who could be batting a thousand.
Herbert provides full illustrations - no inkers required - while the finishing touches are added by a trio of colouring hands, Hi-Fi, Blond and (I have an actual name) Wil Quintana; it's safe to say this lot know what they're doing. Stalwart Steve Wands handles the lettering, while Andrew Marino and Eddie Berganza edit. And Howard Porter and Hi-Fi  provides the trade paperback-worthy cover. I wish more Superman comics were this good.
Blond Gene Luen Yang Hi-Fi Howard Porter Jack Herbert Steve Wands Superman #49 review Vandal Savage Wil Quintana