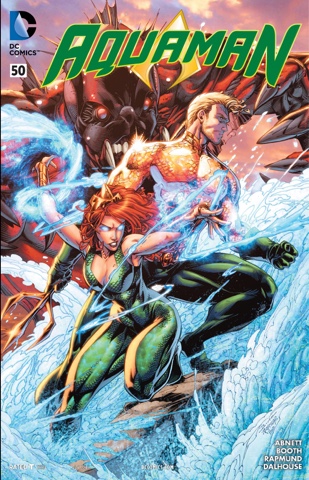 So, last month I was pleading for DC to make guest writer Dan Abnett the new regular guy. And they have, he'll be at the helm come the DC Rebirth relaunch. Let's pretend it's something to do with me. All that matters is, yay! Because Dan Abnett writes great Aquaman. And Mera... sorry, Aquawoman. After five decades, DC's Queen of the Seven Seas takes on her husband's name. 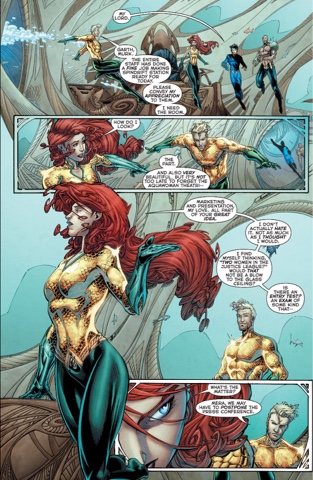 Not that she's suddenly subsuming her own personality. Mera remains outspoken, funny, every bit her own person. No, she's assumed the name after Arthur asked her to be Atlantean ambassador to the surface world. He wants his two realms, undersea and surface, to come closer together; an end to suspicion, the beginning of a partnership. And Mera reckons a flashy costume and superhero name is a good way to grab the attention of a world crying out for heroes.
This 50th issue is set on the day Atlantis invites the press to Spindrift Station, their new embassy in Amnesty Bay, Maine. Mera is ready, director of communications Garth is at her side, Murk has handled security... and Arthur? Called away by the FBI to look into a series of mysterious deaths that everyone is assuming is connected to Atlantis.
Everyone except bureau agents Irving and Ajar, who are keeping an open mind. While they don't assume it's some evil Atlantean who's using water as a doorway to reach their victims, they do realise expert help is needed. It's time for CSI: Atlantis. 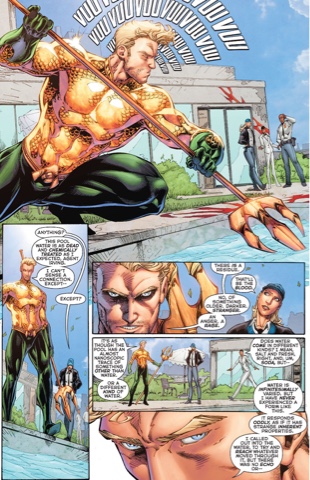 This being a superhero comic, and a gala fiftieth issue at that, the villain soon appears. Boy, does he appear. 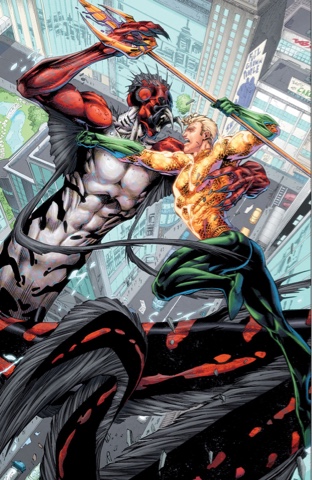 That is one scary critter. He reminds me of the mer-people from Scott Snyder and Sean Murphy's compelling The Wake series of a couple of years back - somewhere between a giant eel and Hannibal Lecter.
Cue a big fight, one allowed to breathe by the extra pages. I'm not always a fan of massive great panels but a bad guy this big, this well designed, needs more space than your average book can afford. And artist Brett Booth also uses the space to showcase Aquaman's prowess - this is one of the most enjoyable fights I can remember. And not purely because of the art - Abnett gives us an Aquaman whose compassion for the victims doesn't preclude his having sympathy for the villain. A hero confident enough that he doesn't have to punch first and ask questions later - the man can multitask.
The dialogue throughout the issue sizzles, from the FBI agents' banter to Mera's sassiness.

'Gussied'? Truly Mera is channelling Rita Hayworth.
And it's Mera who provides my favourite scene this issue, as she enchants the press.
It all bodes well for the upcoming DC Rebirth relaunch - Aquaman and Mera as partners in crimefighting and diplomacy, Garth back in classic mode and, though unseen this issue, Tula as ruler (acting, but I had a rhyme going on there, you know?) of Atlantis. In his first story Abnett has given us a new adversary who bears watching, a promising set-up and hopefully recurring supporting characters in Irving and Ajar.
Brett Booth isn't around for the relaunch, but it's good to see his supercharged style here. The characters have real character - I suspect he especially enjoyed drawing Mera - and Booth has fun with bits of background business, such as in the opening scene. 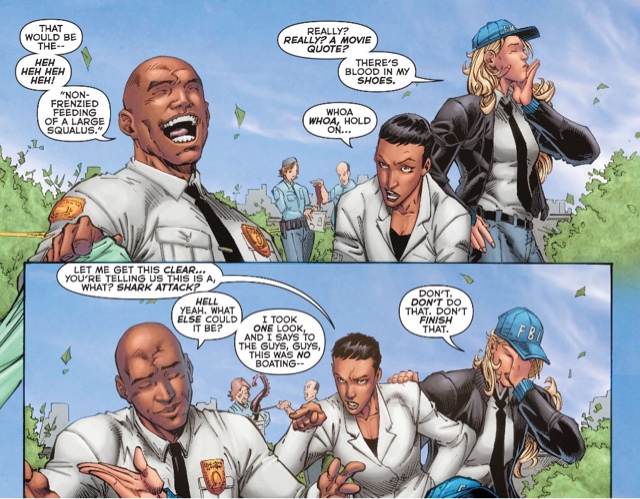 Teamed with inker Norm Rapmund, Booth provides big art for a wild story - hopefully they'll pop back to the series sometime. Regular colourist Andrew Dalhouse fills the world with attractive tones, and really comes into his own when Arthur and his opponent - whom the media name Dead Water - go into uncharted territory. 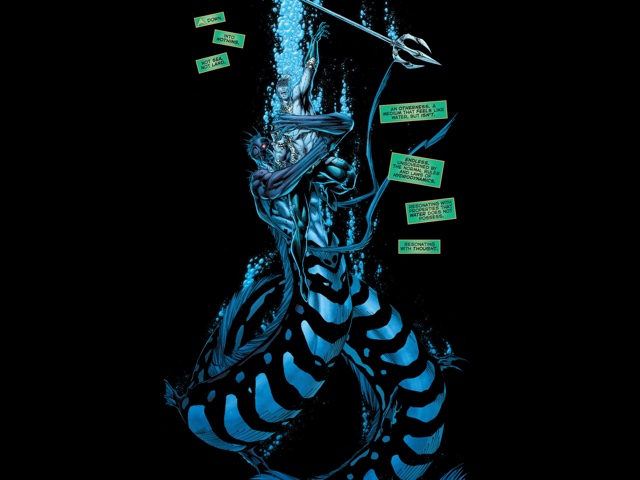 And whomever was in charge of caption box placement, great job!
Aquaman #50 is a fantastically entertaining issue of a series that's getting better by the month. Dive in.
Andrew Dalhouse Aquaman #50 review Aquawoman Brett Booth Dan Abnett Mera Norm Rapmund