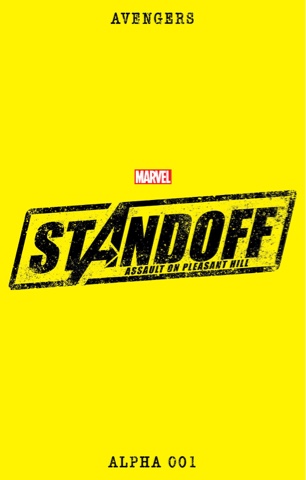 Don't judge this book by its cover. Certainly, little imagination has gone into that first page - is it meant to be a Shield file? - but inside, well, that's another matter.
The book opens with Bucky, the Winter Soldier, taking over a Shield helicarrier to grab information pertinent to a case he's investigating. It's the fourth such raid he's made on Shield bases in weeks, and he's been smashing the places up along the way. As he approaches his endgame, Bucky decides his best friend and former partner Steve Rogers - currently elderly and a Shield commander - needs to know what's going on.
In New York, meanwhile, Sam Wilson - Falcon turned Captain America - is summoned by super-whistleblower Whisperer. It turns out the Edward Snowden-style spreader of  classified information has something big he needs to share.
Bucky and the Whisperer - revealed to be professional Marvel sidekick Rick Jones - have discovered the same thing: Shield director Maria Hill has hung onto a Cosmic Cube fragment she'd been ordered to destroy. Neither Bucky nor Rick know what she's doing with it, but they have a location. 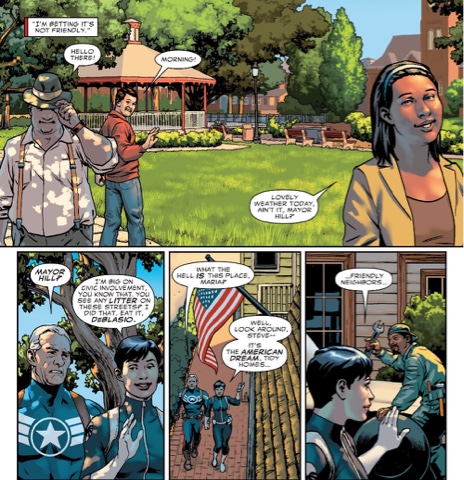 While Sam, Rick and Bucky don't make it to Pleasant Hill this issue, Steve is taken there by none other than Hill; on learning Steve knows she's done something, she realises she may as well tell him the truth. And the unveiling involves a bunch of fan favourite super-villains and an awful lot of fun.
Fun, because this chapter in Marvel's latest crossover is written by Nick Spencer, whose Superior Foes of Spider-Man and Ant-Man series have shown he knows his way around a quip. Not just that, but he's skilled at deploying said humour in sharp, pacy narratives that use Marvel continuity without sacrificing originality. The opening scene, for example - Bucky's helicarrier raid - has unexpected wit alongside the tension. The only thing I'd like to have seen him do that he didn't is make Hill seem like she could be the leader of America's most important security service; she is, sadly, totally on Brian Bendis model - smug, shallow, thoroughly irritating.
I love that Spencer incorporates Steve Rogers' three most famous sidekicks - in order of print appearance, Bucky, Rick and Sam - to kick off a story that will restore one of my favourite series of the last couple of decades to the Marvel line-up. Pre-publicity means you likely know who's residing in Pleasant Hill and what series is coming, but just in case you don't, I'll resist the inclination to reveal all. Just give this book a crack, if you've any affection for the Marvel Universe and its colourful characters. The interaction between Sam and Rick, in particular, is great character work that moves the story along. Rick, who's seen everything but remains unjaded; Sam, super serious and aghast at Rick's love of trouble - I'd be interested to see this pair share a buddy book. 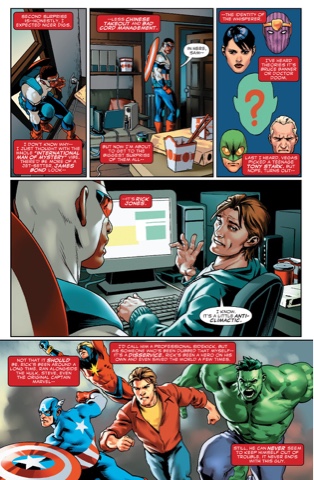 Jesús Saiz, who's been a DC regular for years without ever breaking big, provides full-colour artwork. And it is gorgeous. I'm used to Saiz' excellent storytelling, strong figures and smart characterisation - the clarity is excellent throughout - but I never knew he was so good with colours. The facial modelling is exemplary, while the naturalism of Pleasantville contrasts superbly with the intensity of the action moments. 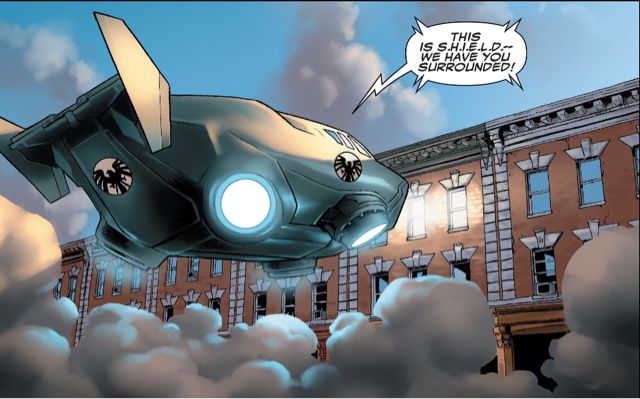 Something as ordinary as smoke from a Shield craft's exhaust looks amazing, while sunlight through a diner window feels positively heavenly. And the final page, while not unexpected, has all the brooding menace needed to give it power.
I've not been a big fan of Marvel 'events' of the past few years, the likes of Siege, Fear Itself and (ducks) Secret Wars. But if this and last week's similarly fine prologue, Avengers Standoff: Welcome to Pleasant Hill, set the tone and standard, I'm optimistic that Marvel's spring springboard for the return of... those characters... is going to prove rather special.
Avengers Standoff: Assault on Pleasant Hill #1 review Jesús Saiz Nick Spencer