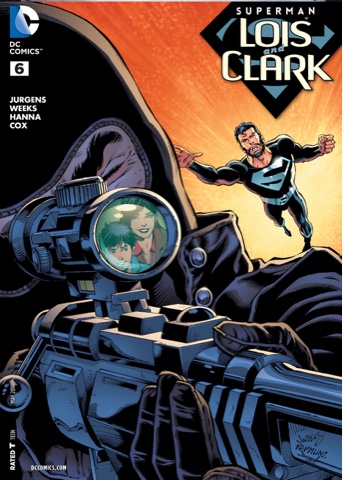 Everything's coming home to roost as this mini-series heads towards its conclusion. Lois Lane has been writing books, anonymously, exposing Intergang - now the hi-tech hoods get their hands on her. Superman is heading to her rescue but is delayed by a TV company-created 'super-villain' who inadvertently puts the lives of hundreds of motorists at risk. And Hank Henshaw learns that it's not just the US authorities who are interested in his mysterious return from space.
Writer Dan Jurgens has been seeding plots since the first issue and here's where they all explode in a chapter bursting with tension. Will our Super-refugee from pre-Flashpoint Earth have the power to save everyone? How will a bound Lois and son Jonathan escape a burning building? What is the secret of the Oblivion Stone? The answers are here, and they don't disappoint, as Jurgens displays the flair for plotting and characterisation that makes him one of the best Superman writers of our time. 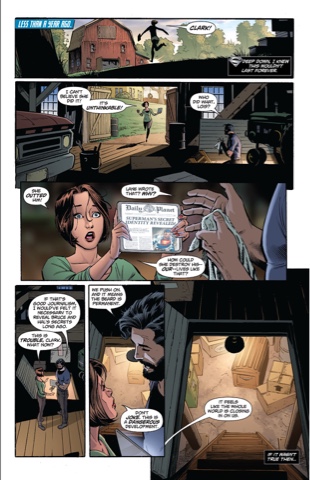 We even get a flashback showing Lois and Clark's reaction to the outing of this Earth's Superman by his Lois Lane.
My favourite scene, though, is Lois and Clark working together to show just how useful a power super-hearing is when allied to intelligence and experience. 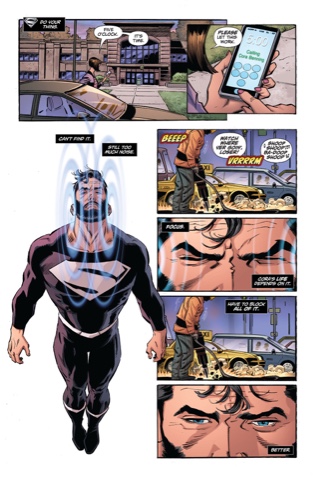 It's great teamwork, not just from Mr and Mrs Superman, but from Jurgens and artist Lee Weeks - I do hope Weeks joins Jurgens when the latter takes over as Action Comics writer soon.
My only quibbles are Henshaw's apparent lack of concern over losing his wife in his recent space escapade, and the new design for classic DC character Hyathis; she looks amazing, but she doesn't look Hyathis. Still, that can easily be tweaked down the line.
As well as the lead creators, we have Scott Hanna providing pin-sharp inks, Jeromy Cox illuminating with his colours and A Larger World Studios handling the letters. Jurgens picks up his pencils and partners with inker Norm Rapmund and colourist Hi-Fi to bring us the grabber of a cover.
With two issues to go, there's no doubt Jurgens and Weeks are going to stick the landing - they know where they're going and I'll be with them every step of the way.
A Larger World Studios Dan Jurgens Hi-Fi Hyathis Jeromy Cox Lee Weeks Norm Rapmund Scott Hanna Superman: Lois and Clark #6 review