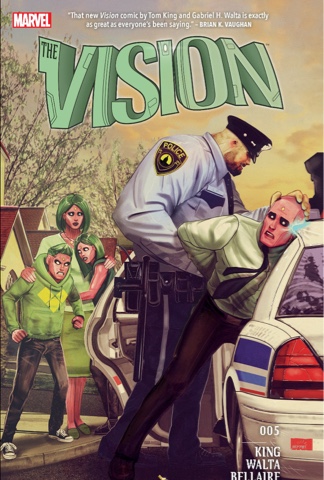 It's dinner time and The Vision receives a knock on the door from the police department. They want to talk to him in connection with the killing of a schoolmate of son Vin.
If the Vision knows wife Virginia is responsible for Chris Kinzky's death, he's in deep denial. Either way, he answers the questions of local cop Matt Lin with as little detail as possible.
Earlier in the day, Virginia pays a secret visit to Chris's dad in hospital, as he fights for his life. At the local school, Shylock's 'If you prick us, do we not bleed?' speech from The Merchant of Venice has a profound effect on Vic. And in the library, sister Viv looks at Chris's picture in the yearbook, and tries to hold it together.
This maxi-series by Tom King and Gabriel Hernandez Walta has been getting a lot of great reviews. I wrote here about how the first issue knocked me out. Dan DiDio says this book is what persuaded him to offer King a DC exclusive. You know that expression, believe the hype? There's no hype, this book is brilliant. Writer and artist are in perfect synch, constantly bringing us surprises that make perfect logical sense given the characters they've so quickly established.
We're following a family of robots yet the humanity drips from every panel. Partly, this is due to the omniscient narrator telling us about the flesh and blood bit players who, as much as the Visions, have only as much life as the lines and colours and words give them. And King and Walta and colour artist Jordie Bellaire breathe an awful lot of life into them.
As for Virginia and Viv and Vin and the Vision himself, there's no doubt that these androids can cry. They're full of emotion, and when they deny it, that's when things get really bad. It's telling that the Vision hasn't himself chosen a human name, opted to be called Van or Vern, Victor or Valentine or Vaughan. He's a step apart from his own narcissistic experiment, observing his artificially created family rather than truly engaging with their feelings. And that's perhaps why he takes a wrong turn this issue.
Walta's storytelling continues to be wonderfully subtle, quietly hypnotic. There's no doubting what's going on, or how people are feeling. I would never try to lie to Walta, because the man knows body language. Walta's craft and style frees King up to embellish with his words - and Shakespeare's - making picture postcard suburbia one of the most sinister sections of the Marvel Universe.
In an issue that grips from start to finish - think 'If Hitchcock directed comics - the highlight is the police interview. The 'conversation' between Lim and the Vision is punctuated by the narrator setting up the issue's emotional climax with a deep look into the history of the Marvel Universe. 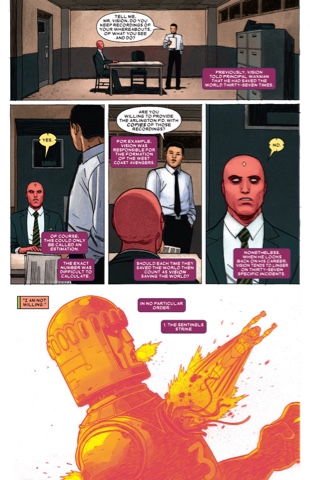 It's a quiet countdown to disaster and I can't think of another creative team that could pull this off. Dan DiDio should, right now, be writing a few more cheques.
Kudos, too, to Clayton Cowles for his always sharp lettering - at one point I thought he'd made an error, but no, it's just that the creators of this book are far cleverer than I am. The cover is a gorgeous piece from Marco D'alfonso, suitable for framing if iPads weren't so darn heavy. Chris Robinson and Wil Moss edit the book and should also take a bow.
Seriously folks, if you've not yet given this series a try, go back and read #1; heck, if you have Marvel Unlimited, it should be on there by the time next issue hits. King's recently announced move to DC isn't stopping this comic from getting its full 12 issues, to which I can only say, thank you Marvel. This is a comic that's going to go down as a classic, and I'm so happy to be part of the audience.
Chris Robinson Clayton Cowles Gabriel Hernandez Walta Jordie Bellaire Marco D'alfonso The Vision #5 review Tom King Wil Moss