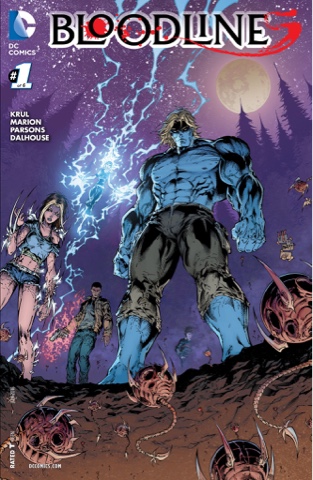 Well, if Marvel can redo Secret Wars (twice!), DC can certainly bring back the Bloodlines concept. If you missed 1993, a) you're young and I hate you, and b) it was an event which saw aliens 'infect' regular folk with super-powers. This brought us the likes of Anima, Argus, and Hitman - the breakout character who debuted in Demon and went on to his own superb series.
Then there's the guy who gets a do-over in this first issue of a six-part mini-series written by JT Krul and drawn by V Ken Marion and Sean Parsons. We meet teenager Eddie the morning after, unknown to the people of Pine Ridge, a meteor hurtles from space and lands in the forest surrounding the town. 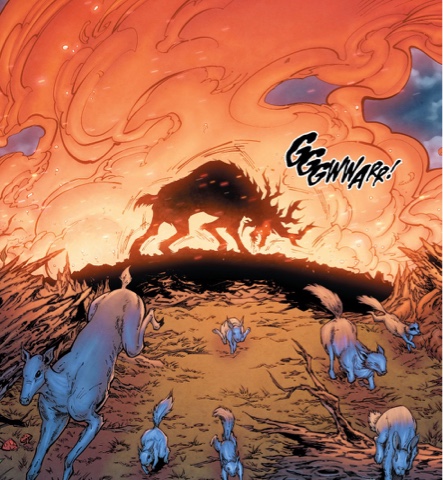 A deer becomes a monstrous predator, set to strike when the local kids throw a party in a clearing nearby. Eddie has an unspecified wasting disease, and while he's trying not to let it crush his spirit, he's understandably feeling down. Things aren't all bad - he has a Mom who loves him, and a best pal who makes sure he's included in school activities.
Unfortunately, by the end of the issue, one of those 'has' becomes 'had' and Eddie finds his deteriorating body more unfamiliar than ever he could have imagined. He's on his way to being the hero known as Loose Cannon.
And going by that cover, we also look to be getting a new version of Anima (because no one demanded it!) and, maybe, Gunfire? I'm not sure, Bloodlines was a long time ago and while I read a lot of the Annuals in which characters debuted - it was an expensive crossover - not much stuck. I do remember that there was a lot of energy as established heroes encountered heroes - and villains - new to the game.
While this first issue isn't a rollercoaster ride, I like it. After the electric opening - that deer really is a nightmare - Krul slows the pace down to introduce us to not just Eddie, but other people around town... Albert the genius, Haley the mechanic, Blake the scumbag and more. By close of play I was intrigued enough to want to know what happens to them. While Bloodlines is firmly fixed in the DC Universe, with the Daily Planet on sale, a reference to Luthor and superhero tattoos, the feel is that of a standalone teen horror movie. And if you're in the mood, such can be lots of fun. 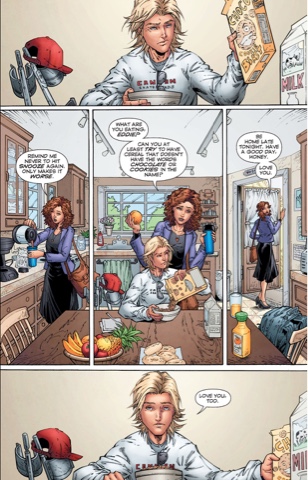 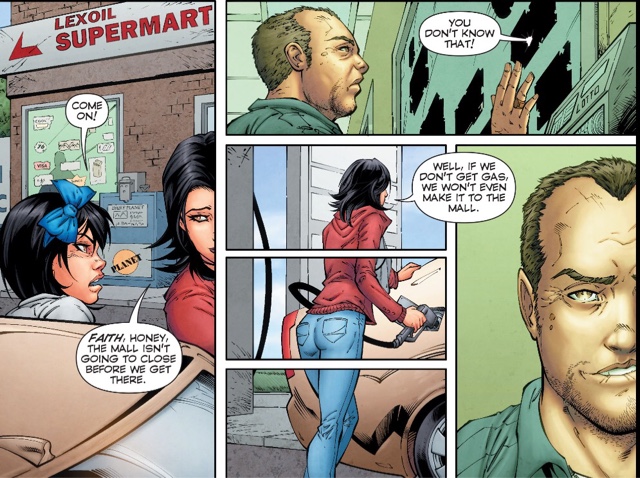 The art of penciller Marion, inker Parsons and colourist Andrew Dalhouse helps here, being expressive and attractive. Marion makes some smart storytelling choices, for example, giving a breakfast scene more interest by splitting one big panel and having Mom move around it while Eddie stays in the same place, and making it very clear when someone else is admiring a rounded bottom. And when all hell breaks loose, Marion and co's pages really come alive.
Meteor trail apart, this isn't an earth-shattering comic, but it's unpretentious fun, with potential to go pretty much anywhere. If you've the cash to spare, and superhero sci-if is a genre you like, give it a shot.
Andrew Dalhouse Bloodlines #1 review JT Krul Sean Parsons V Ken Marion