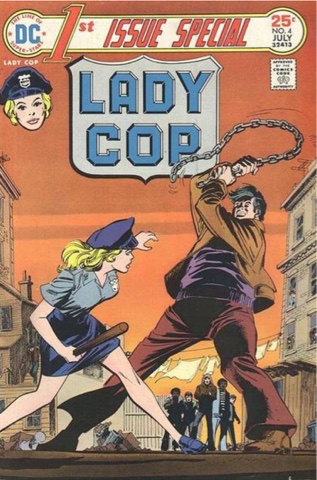 For years, I've had a book called 1001 Comic Books You Must Read Before You Die. Sadly, I've been too busy thinking about my comics to read it. But I know one thing, if First Issue Special #4 isn't in there, the book is worthless. Worthless!
Because this is the debut of Lady Cop. If you've not read the issue, you've likely heard of it because it's notorious for containing the first mention of VD in a mainstream comic. It might even be the first acknowledgement that unmarried people have sex. Somehow, in 1975, DC Comics slipped a bit of social realism more daring than 'Not Everyone is White' past the Comics Code Authority.
As for what the rest of the comic contained, I had little idea. I did know that lead character Liza Warner eventually showed up in the Grant Morrison/Gail Simone Atom series, well, in name at least. But what happened when she debuted in DC's successor to Silver Age series spawner Showcase?
An awful lot. The story opens with a young woman cowering under a bed as her roommates are murdered. She gives a description of the killer to a young policewoman and is complimented on her recollections.
Though, it's fair to say, the description is partial... 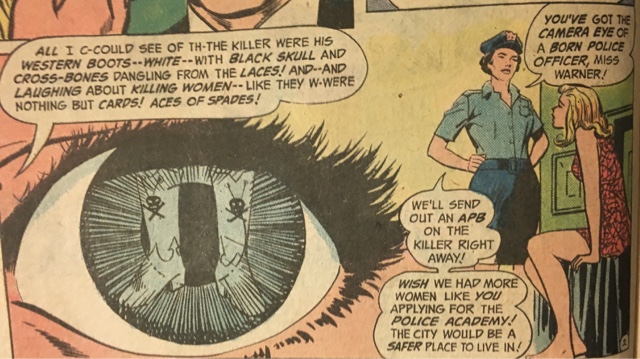 Inspired by the compliment and a desire to find the killer, Liza signs up for Police Academy, impressing right to the moment of graduation. 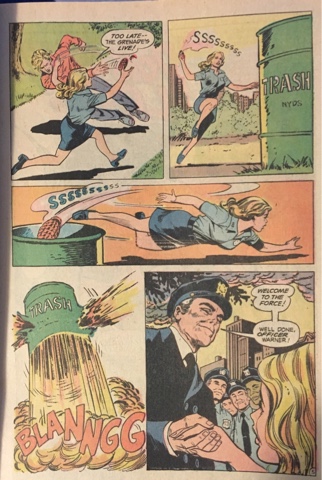 Her first day on the job sees her answer the cries for help of a young woman being roughed up by a pair of thugs. The woman escapes and they decide to take their frustration out on Liza. She's more than a match for them. 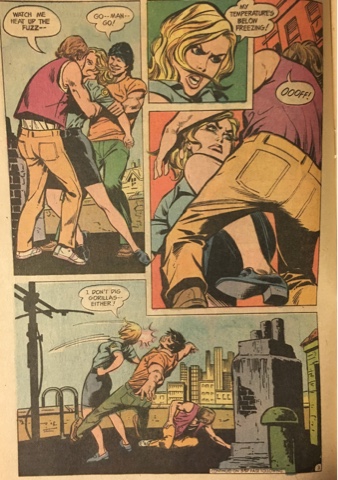 Despite her win, she's feeling a little down. What she needs is a rest, and a cute kid gives her the excuse to catch her breath. 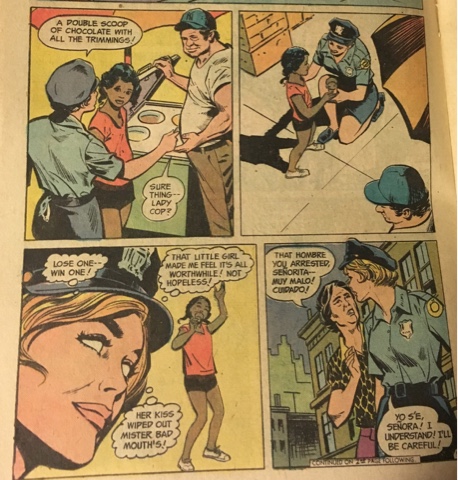 Pounding her beat, Liza sees the girl she'd saved on the phone to her boyfriend. And the news isn't good.

Liza wants to help, but the girl bolts, and she can't follow because duty calls. 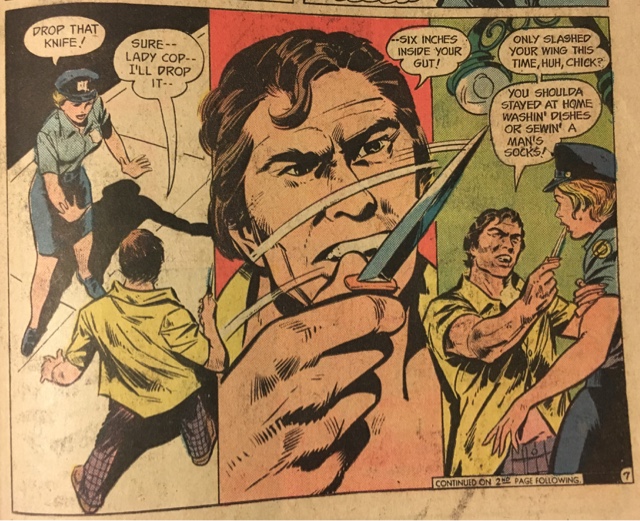 You'll not be surprised to hear that 'Lady Cop' takes him out, before saving the life of the grocer being robbed, who's had a cardiac arrest.
The shift finally comes to a close, and we meet Liza's boyfriend Hal, who's quite the hunk, and quite the male chauvinist pig. 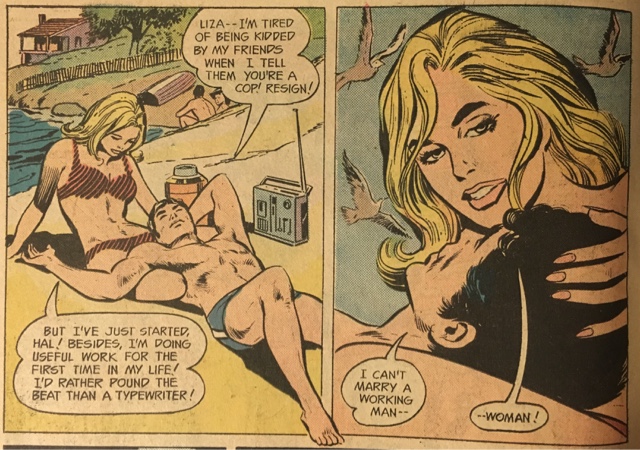 The girl, Nina, is mildly comforted, but her widower father shows up, and loses his temper. But, you know, Lady Cop! 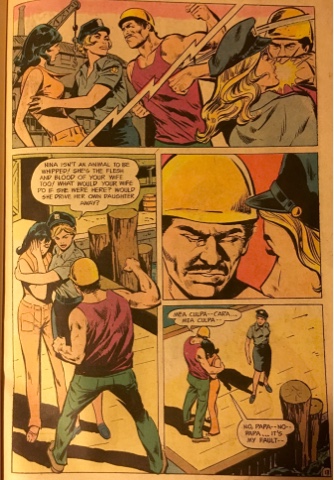 He sees the error of his ways, promises to stand by Nina, and all is well... until a caveman friend of the earlier ruffians shows up and basically offers himself up as Lady Cop's victim. 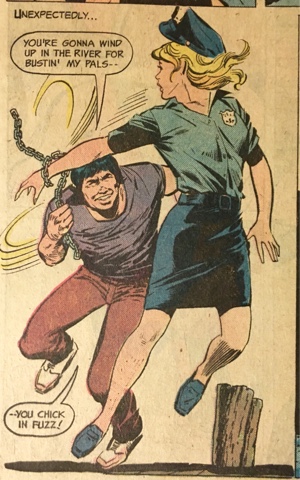 The story ends on a bittersweet note. She loves her new life, but there's one very big loose end... 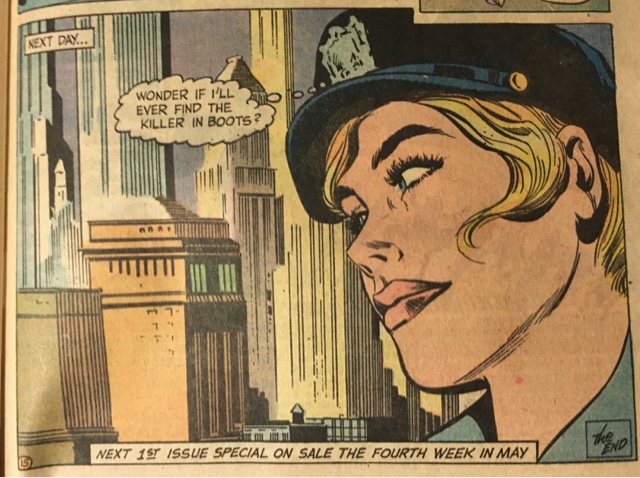 Whew! Fifteen pages and  Officer Liz Warner has cleaned up New York. Interestingly, the book's page count has an unusual split - Lady Cop's 'origin' is five pages at the start, but look at the splash page of the main event. 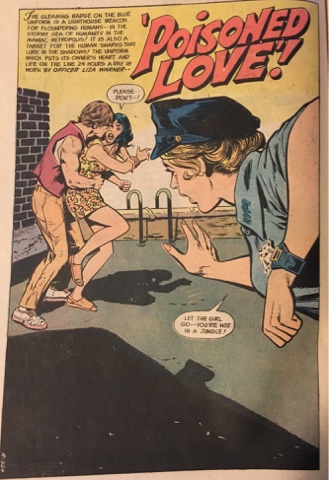 Read the legend - touch the image to enlarge. Did writer Robert Kanigher really intend that sentence to end with 'Poisoned Love'? Nah. That's where the Lady Cop logo, squeezed into a corner on page one, was meant to be, with the story title to go in that big black shadow penciller John Rosenberger and inker Vince Colletta have helpfully provided. Did editor Sol Harrison balk at the idea of a splash so far into the story? It wasn't very DC in 1975.
I like this tryout a lot. Kanigher channelled the street vibe he'd honed on the Lois Lane title, both on Lois's strip and the Rose and the Thorn back-up. He was one of the first comic book writers reflect the multicultural nature of the urban US, here, for example, including the African-American child and having Liza drop some Spanish.
Liza Warner is a firecracker, more than a match for any aggressor. It's a shame that it's only men who cause trouble, though, with sexism equated with criminality. Wasn't there a single Dragon Lady available?
Mind, Lady Cop herself isn't averse to making the off sexist assumption. 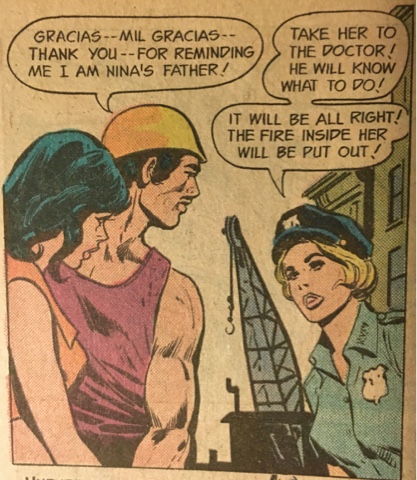 The dialogue is priceless, with lines such as: 'I'd rather pound the beat than a typewriter' and 'I've got this chick pinned like a chicken in a sack'. And then there's the suitable-for-embroidering 'A clear conscience is the softest pillow'.
And I wonder if Kanigher is having a bit of fun on the police theme. Specifically, in terms of 'arrest'. There's the cardiac arrest. The VD that can be arrested. And 'a rest' on the street... which may be a stretch. OK, I'm pretty much making this one up. But I met Robert Kanigher, he was amazing, extremely mischievous of mind. Who knows what he might have been playing at.
Penciller John Rosenberger was another Lois Lane regular, and his fluid line and sense of place is perfect for this story. Just look at the composition of this panel.

And the much-maligned Vince Colletta also deserves credit, for his dramatic blacks. Things do get a bit cheesecakey at times, with Liza's bust liable to thrust, and her blouse ever-ready to pop, but the most flesh on display belongs to NeandertHal. 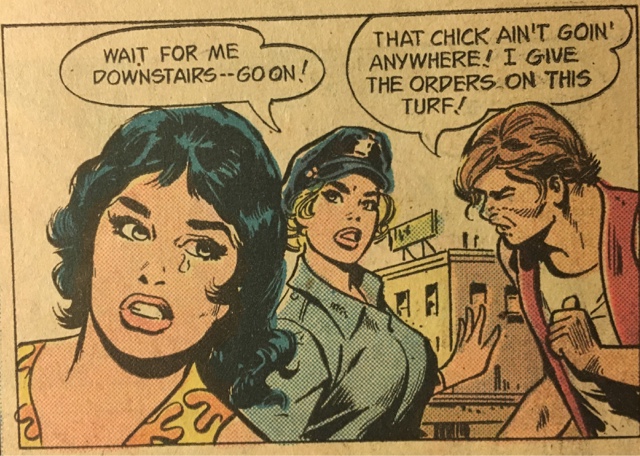 Throw in a splendid cover by Dick Giordano with a distinctly Wild West feel and you have a wonderful package, one that should have been continued. After all, Lady Cop still had that killer to find...
John Rosenberger Retro Review - 1st Issue Special #4: Lady Cop Robert Kanigher Vince Colletta