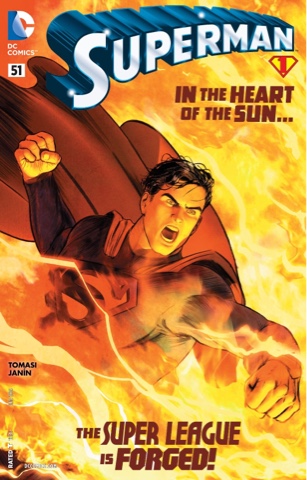 Superman is running diagnostic tests in the Fortress of Solitude because after his recent trials - the Darkseid War, the battle with Vandal Savage and the encounter with Rao - he's not feeling great. And the results aren't good - he's dying.
This makes him angry. Not because he's going to lose his life, but because he won't be around to save the lives of others. He's snapped out of his mood by first Krypto, then an attempt by parties unknown to break into the Fortress computer systems. The bid fails, Superman ups his security and gets on with his day.
It's time to say a few goodbyes. First, a trip to Smallville and Lana Lang. 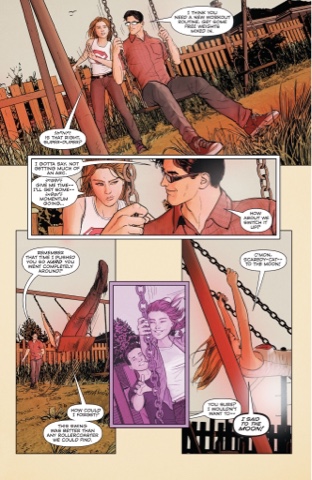 Then Metropolis, and Lois Lane. 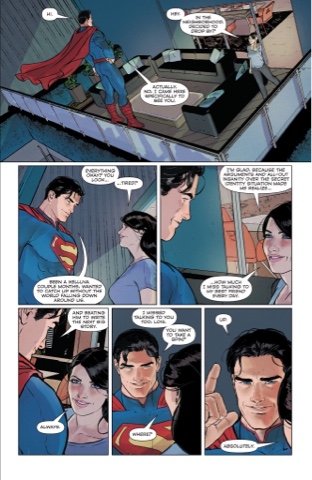 Meanwhile, in China, the would-be Fortress insurgents redouble their efforts to steal Superman's secrets, and in Minnesota, a strange visitor makes a big impression.
Where do I begin? This is the most joyous Superman story in years - and, how ironic, it's centred on the last days of the Man of Steel. Writer Peter J Tomasi gives us so many wonderful moments, from the bond between man and dog to the brother/sister relationship with Lana to the scene at Lois's apartment. And then there's the most fabulous action montage in aeons from artist Mikel Janín. If someone isn't already contacting his agent to purchase this piece of art, I'll be a three-eyed Kryptonian babootch. From cover to final page, Janín - working in full colour - gifts us sumptuous artwork, with the emotional moments as awesome as the spectacle.
The funny thing is, on opening the book and being met by a close-up of Superman uttering the line 'I'm dying', I laughed out loud. So much angst, we've had lately. But on turning the page, and seeing a majestic Fortress spread, I began to suspect we were going to get something special. And we do. We get page after page of Tomasi showing us how much he loves - just loves - Superman. I hated his recent Superman/Wonder Woman work, and as a longtime Tomasi fan, hoped against hope that it was an editorially mandated aberration. I think this issue nails that idea. Need convincing? 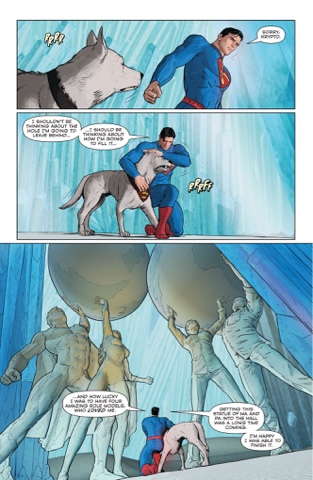 Lord, Tomasi's super-sweet Superman is so right - why didn't I ever question the fact Ma and Pa Kent weren't alongside Lara and Jor-El?
Tomasi also shows his smarts in giving us a 'translated from Mandarin Chinese' caption, apparently wanting to avoid an error akin to the instantly infamous 'translated from Pakistanian' editor's note in Superman/Wonder Woman Annual #2. OK, the note is attributed to editor Eddie Berganza, but I'm pretty sure the writers sort them. Whatever the case, phew.
And the final detail that made me grin? 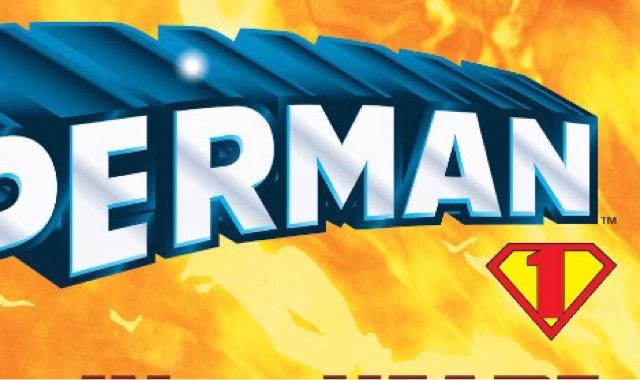 A 1990s-style triangle numbering system for this Super-League storyline.
So many little things, wrapped up in a compelling storyline - Superman with a terminal diagnosis is one of my favourite narrative hooks - and drawn in gorgeous style... it looks like the last Man of Steel story of DC's New 52 era is going to be the best.
Eddie berganza Lana Lang Lois Lane Mikel Janín Peter J Tomasi