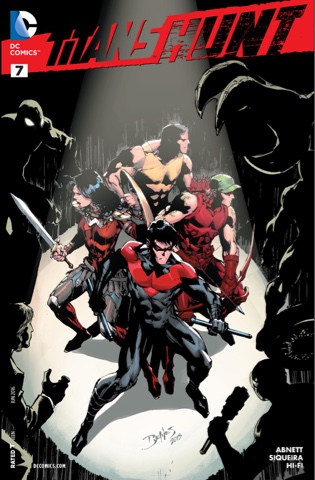 The Young Adult heroes of the DC Universe are in trouble, with mysterious forces massing against them as they deal with memories they don't recognise. Aqualad, Wonder Girl and Nightwing have followed the call of organ music played by Mal Duncan to a tornado-shaped tower. Mal's pregnant wife Karen is up against the Mad Mod. Lilith, Gnark and Arsenal are attacked by the she-cyborg named Honeybun. And Hawk and Dove? 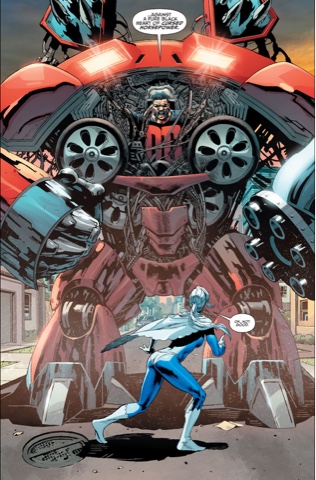 That would be Honeybun's Daddy.
If you've not been reading this series, which looks set to kick off DC's Rebirth event, try this issue anyway, because it's an explosion of superhero fun. Writer Dan Abnett recaps as we go along, while dropping new mysteries such as the nature of Karen's powers (reading her sound effects backwards may provide a clue). 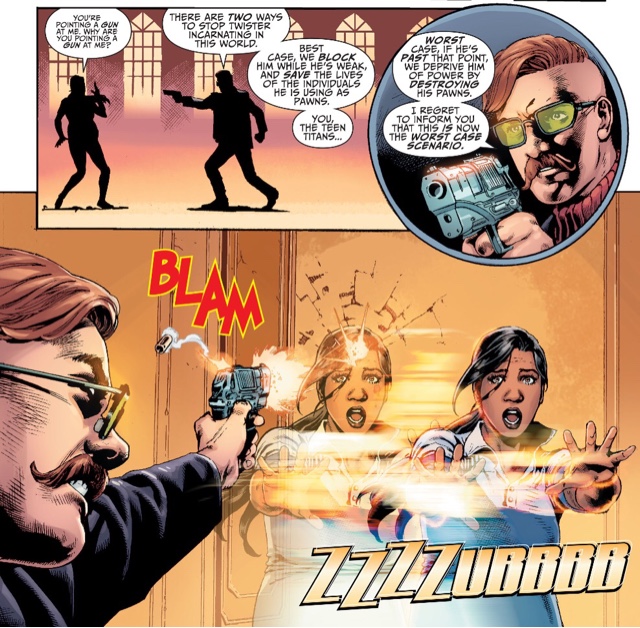 I'm not usually one for techie, mecha battles, but artist Paulo Siqueira's action-packed pages are full of big, loony images and hi-octane heroics to make an old DC fan smile. Robotic rogues Honeybun and Daddy - agents of metahuman troubleshooters Diablo - are great additions to the DC Universe, cocky ballbusters who could fight on the side of the good guys as readily as the bad.
Then there's the Mad Mod who, given his new look, we should perhaps rename the Horrible Hipster - I'd certainly like to see what this smooth fellow can do when let loose.
While the once-Teen Titans are battling amid a fog of confusion as hidden memories re-emerge, they remain formidable, as individuals and as an instinctively together team. The sinister Mr Twister may have them on the back-foot, but there's a reason he fears them even as he wants them as his slaves.
Siqueira has been around DC for years, producing good, stylish work, but with this issue he makes a claim for A-list status. The layouts are superb, the characters compelling, the action and suspense at a new high. There's a Brian Bolland finish at times, a naturalistic lushness. Colourist Hi-Fi complements Siqueira perfectly, with a moody palette that suits a story spanning the scale from sci-fi to spooky. Siqueira and Hi-Fi's final page would make a cover as effective as the excellent image provided by Ed Benes with Hi-Fi.
I suspect sales on this book are up due to the late-in-the-day confirmed connection to DC Rebirth; it should be selling great guns on quality alone. If you've yet to try Titans Hunt, which ends next month before 'Rebirthing', give it a shot. I doubt you'll regret it.
Dan Abnett DC Rebirth Hi-Fi Paulo Siqueira Titans Hunt #7 review