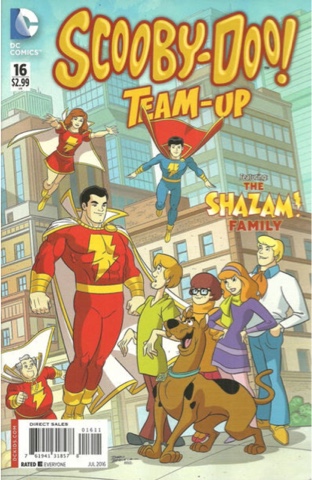 Usually, I buy Scooby-Doo Team-Up digitally. Each comic-sized issue is split into two parts, which is frustrating, but the scans are brilliant for screen grabs - great for an inveterate blogger. But hearing that the next story would see the gang meet the Marvel Family, well, I couldn't wait two months to read the whole thing.
So to the comic shop I went and boy, am I glad I did. There's never been a bad issue of this series, but this one, it's beyond glorious.
The story sees Mystery Incorporated called to Fawcett City by Tawky Tawny and Uncle Marvel after the Marvel Family get captured by the Monster Society of Evil. You can imagine Shaggy and Scooby's reaction to just the name, even though at least one of 'em doesn't sound so scary... 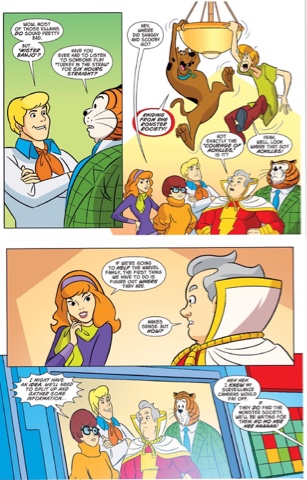 Writer Sholly Fisch gives us a great example of the kids doing some smart detective work to establish where the Marvel Family might be, and Tawny and Uncle Dudley also help out. 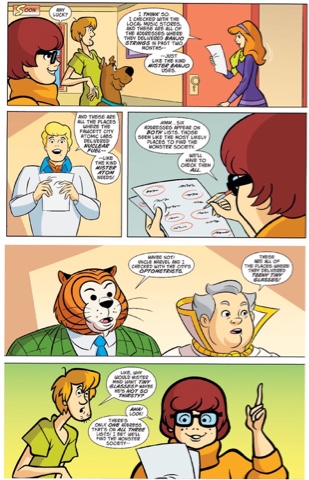 In short order everyone is at - where else - an abandoned warehouse on the corner of the Easter eggy 'Parker and Beck'. But how the heck can a bunch of kids, a senior citizen and a terribly genteel tiger take on the likes of Ibis, Sabbac, King Kull, Mr Atom and fiendish leader Mr Mind? It not as if any of the gang are like Billy Batson, Mary Bromfield or Freddie Freeman, equipped with magic words...
You can likely guess where the story is going; whether that's the case or not, you'll enjoy the climax immensely. Dario Brizuela draws the heck out of 'Simply Marvelous', filling every panel with humour, drama and just general joy. Rather than give us CC Beck's Cap, Brizuela looks to be channelling the TV live action version, and it's an interesting approach. Mary Marvel gets big hair. And Freddie? Less Elvis but pretty much as ever, the clean-cut young hero. 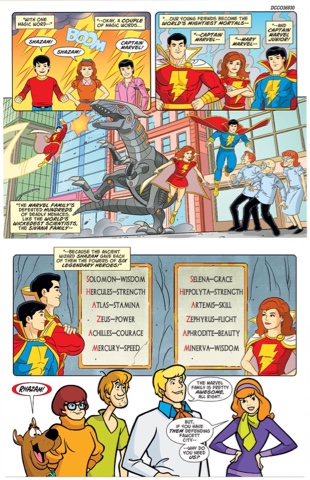 Sholly Fisch opens with a page recapping the separate acronyms that power up Billy & Freddie, and Mary - I'd never really thought about the fact that speed isn't listed among Mary's abilities, still it's not like she can't keep up with the boys! Anyway, the set-up primes you to guess who might be lending power to a couple of characters when they show they can be marvelous too. To spoil one of 'em, the irony of 'Sibyl - foresight' had me laughing out loud.
Every page elicits at least a huge grin, as Fisch once more finds the commonalities and curiosities of character. Fisch makes it look easy, but he obviously puts immense thought into every story.
I read so many comics, I love loads, but there's none that gives me as much pleasure, every single time, as Scooby-Doo Team-Up. If you've not tried the series, don't dip in, dive into one of the collections. You ron't be rorry!
Captain Marvel Dario Brizuela Mr Mind Scooby-Doo Team-Up #16 review Shazam Sholly Fisch Tawky Tawny The Marvel Family