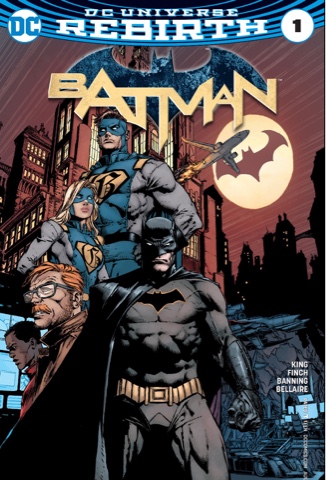 Na-da-da-da-da-da-da-da-da BatMaths!
That's what this issue hinges upon as a missile fired by a Kobra cultist looks set to bring a plane down in the centre of Gotham. Batman may be able to send it somewhere less populated, but it's a question of maths.
Helping Batman out are Alfred, with facts, and new sidekick Duke Thomas, with figures. Lots and lots of facts and figures. Speeds and heights and percentages... 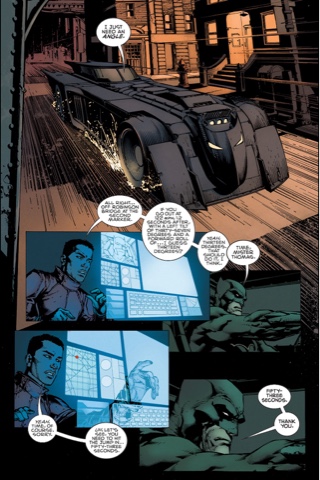 As someone who likes words more than numbers, an awful lot of this issue's script was tumbleweed to me. Just show me superheroes doing wildly unlikely things, forget the ins and outs. This kind of thing saw me fleeing from books such as Greg Rucka's Checkmate; I don't need convincing a writer has done their research, I want comics, not a tech manual. 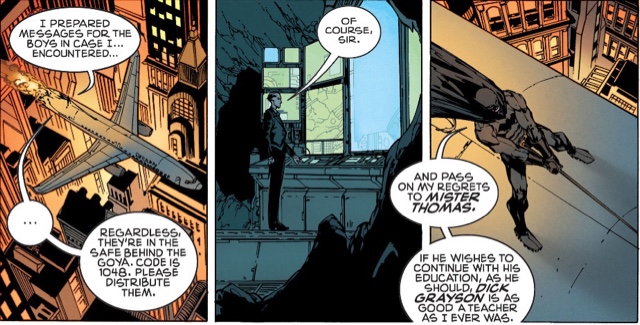 Happily, along the way we get a few nice gobbets of characterisation, focused on such things as Batman's role as foster father to generations of Robins, and Alfred's grin in the face of disaster. And on the final page, my attention is well and truly grabbed.
After Grayson, The Omega Men and The Vision, Tom King is one of my favourite comic book writers and I don't doubt he'll do interesting things with Batman. For me, his biggest challenge is what to do with Duke Thomas. Previous writer Scott Snyder kept dropping him in, building him up for something - but what? Here he takes over from Alfred on comms and stats, analysing information and offering day-saving suggestions and is all very useful. But he literally just does what we've seen Alfred do many times, what he was likely just about to do and what he comes back to doing. Tim Drake could've done the same thing. Or Barbara Gordon. Or her old continuity proxy, Proxy. Or current Oracle-in-waiting, Operator.
If Duke's going to make an impression in an exceedingly crowded Batman Family, the writers are going to have to find him a unique role. He's a good character, so it'd be nice to have him stick around. Over to you, Mr King!
King already has a nice handle on Batman, having him talk to Duke like a professor to a student, and I like his very trad Jim Gordon - tached, frustrated and puffing away disgustingly on a fag. Plus, he gives us Batman as gremlin, which is fun.
And David Finch is a revelation paired with inker Matt Banning aka the appropriately nicknamed Batt. Layouts are excellent, figures convincing, faces compelling and architecture outstanding. There's a terrific clarity to the figures, just look at the delicacy of the little boy on the first page (presumably an orphan coming to try out for Batman's internship programme...), for example. 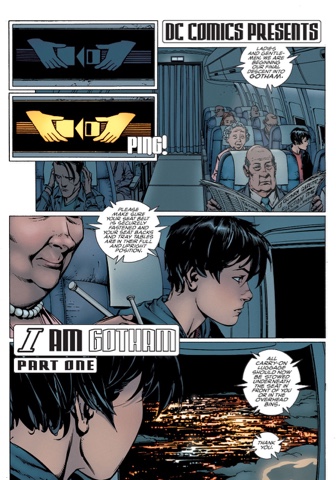 And is that Alfred Hitchcock reading the paper?
Buildings and bridges get a lovely rough-hewn finish, and the Forties stylings of the Batmobile are a delight. Batman himself looks better than I've seen him in the new costume. 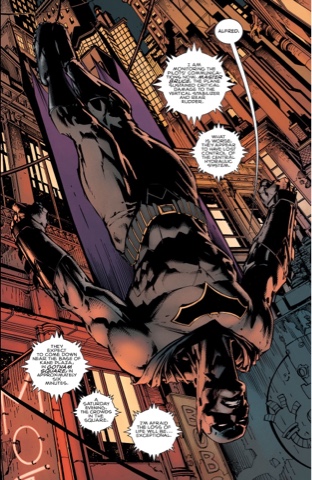 Add in the ever-superb colourwork of Jordie Bellaire - oh, that purple cape lining - and the characterful letters of John Workman and you have a great-looking book.
Finch and Bellaire combine for a pleasingly poster cover, while Tim Sale offers a variant which will likely charm his fans. 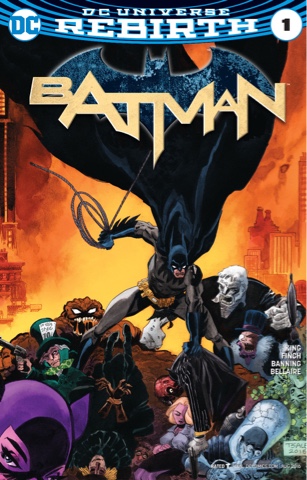 This isn't my favourite comic book this week, but one with plenty of splendid elements; with the arc plot promising to kick in next time, things are likely to get very interesting. But please, rein in the maths.
Batman #1 review David Finch DC Rebirth John Workman Jordie Bellaire Matt Banning Tim Sale Tom King