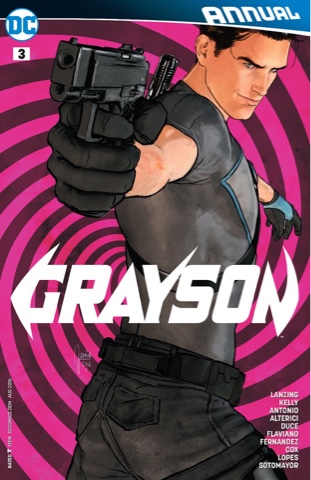 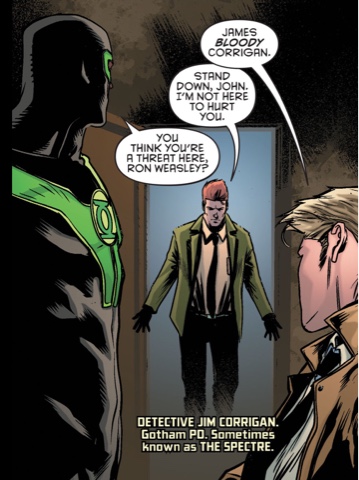 Corrigan wants to know what they know about the superspy known as Agent 37. Each of the four has had an encounter with him, and Corrigan says he hopes that pooling knowledge will help him work out just who the mystery man is.
Constantine tells of almost rescuing Agent 37 from vampires. Azrael met him when Agent 37 was trying to steal a sacred relic. Harley teamed up with him to hobble a collector of criminal paraphernalia. And Baz received an assist against parademons. Each narrator believes that in some way they were changed by meeting Agent 37... but Spyral 'Hypnos' mean they can't recall his face...
With each of the protagonists sharing an aspect of his character - the charmer, the saviour, the gymnast and the superhero - this issue might have been called Aspects of Dick. And if you think I'm making a cheap gag based on our hero's name, this is a cheap gag based on Dick's name. 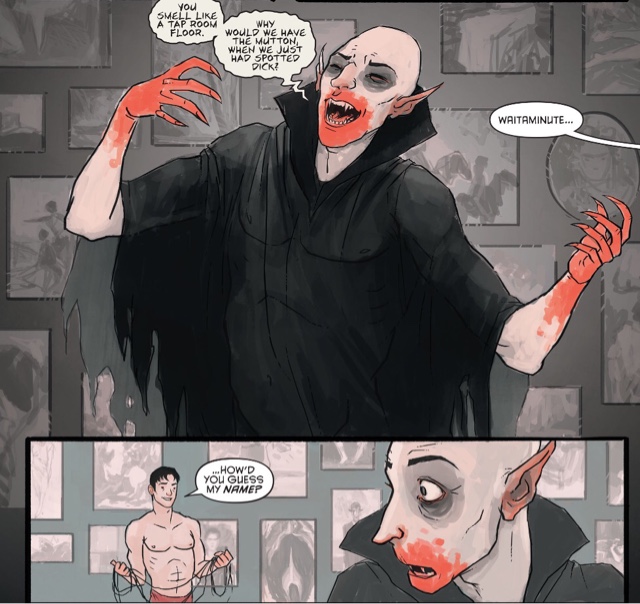 For non-Brits, 'spotted Dick' is a sweet suet and currants pudding, rather wonderful with custard. Writers Jackson Lanzing and Collin Kelly don't have any of the other listeners to the story pick up on the fact Constantine has reported Agent 37's name as Dick, which is a bit of a plot hole. That and Constantine's rather embarrassing lusting after Dick apart, this is a terrific story - I love a nest of vampires, and Constantine and Agent 37 make for an intriguing pair. Natasha Alterici's artwork - the framing sequence and chapters all feature different artists - expertly straddles the line between creepy and sexy. 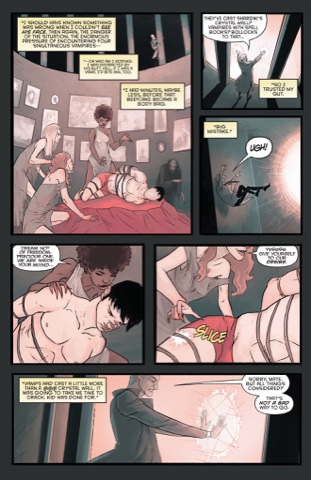 Christian Duce also does a great job, drawing the action-packed adventure with Azrael in Khandaq. I couldn't tell you exactly what Agent 37 taught him - selflessness and truth, I think; I find Azrael such an unappealing character - he's a fanatic with a topknot - that it's hard not to just faze out when he's around. Maybe someone's gotten to me with Hypnos? 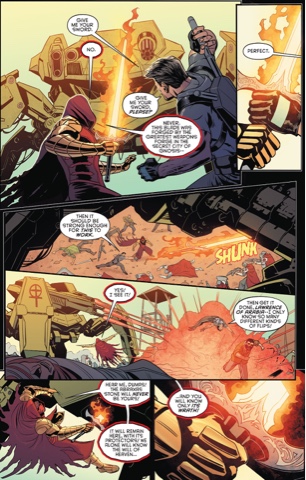 I find his witterings unintelligible, heaven knows why he's been given a prime guest spot... surely the writers don't like him? 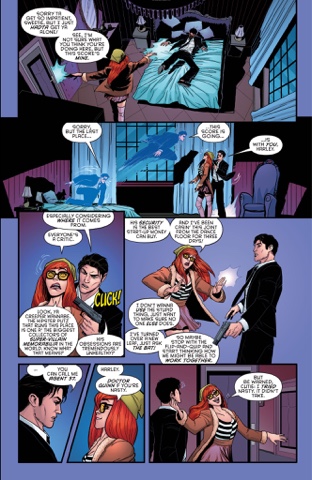 Harley's a lot more fun, and while she says meeting Agent 37 helped her understand her place in the universe 'a little bit', I'm not clear on what she means. Still, their team-up, drawn by Flaviano, is a little slice of joy, and I hope they meet again.

Simon Baz seems a little out of character here and thank goodness for that - as created by Geoff Johns he's pretty obnoxious with his temper and his trigger-happy ways. Here, he does use his gun but Dick influences him to use it maybe a little less, a lesson I can really get behind.

Plus, Baz actually demonstrates a sense of humour - hallelujah. And he's not the only one...

This firecracker could be the 2016 Ma Hunkle. Javier Fernandez draws with delightful dynamism. 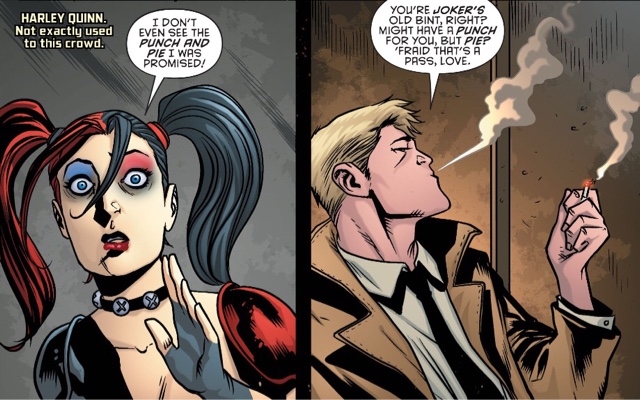 The framing and interstitial pages are the work of Roge Antonio, who's been doing a great job tying up the Grayson series with this issue's writers. He's a smart storyteller, capable of fine characterisation, and I look forward to his next work at DC. The same goes for Kelly and Lanzing, who had a heck of a task picking Grayson up from Tim Seeley and Tom King but they've wrapped things up confidently and convincingly. And in a nice touch, original Grayson artist Mikel Janín is back for the cover.
When next we see him, Dick will be Nightwing once more; Grayson will represent a tiny portion of his comic book history - but a hugely entertaining one.
Christian Duce Collin Kelly Flaviano Grayson Annual #3 review Jackson Lanzing Javier Fernandez Mikel Janín Natasha Alterici Roge Antonio