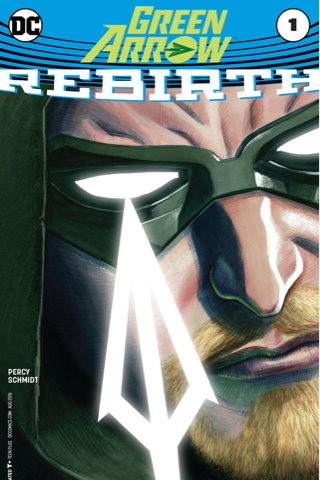 Remember Sam Beckett of Quantum Leap, whose mission was to put right what once went wrong? That's what this DC Rebirth issue is all about, as writer Ben Percy and artist Otto Schmidt - working in full colour - make Ollie Queen's world that much more iconic. Simply put, they bring back the Van Dyck goatee and have him meet Black Canary. One is a visual signifier of comic book Ollie's best days, the other an emotional matter - if I may go a bit Jerry Maguire, Dinah completes him. Ollie alone is great, but when Dinah is around his world just seems right.
At the beginning of this issue, Ollie encounters Dinah as she's passing through Seattle, and they're just one step past being strangers: they've met in passing, after Superman's funeral, and while she's acting cool, it's apparent Dinah's intrigued by him. 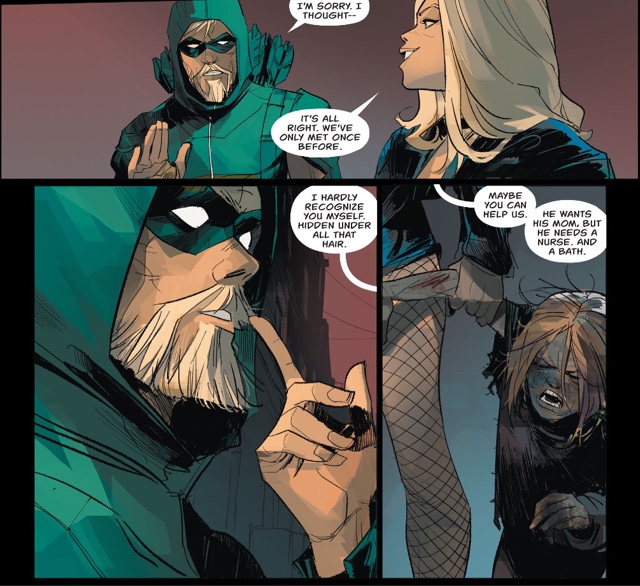 To rewind slightly... looking into the disappearances of street people, Ollie spots a suspicious figure dragging a child through the streets. As it turns out, it's Canary, trying to help the wee tyke whose mother has been stolen away before his eyes. Ollie takes them back to his apartment. 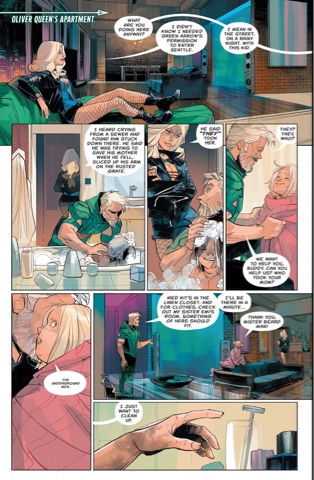 I love this scene so much, the immediate domesticity of Dinah with her feet up while Ollie cleans up the kid; it simply feels right. And after Ollie's finished with the little boy (whose name they never bother to find out, mind you!), he shaves down the beard she'd teased him about. And when Ollie and Dinah let the kid lead them to the city's jungle, where the homeless gather amidst the trees, and they must fight the Underground Men, everything clicks into place. 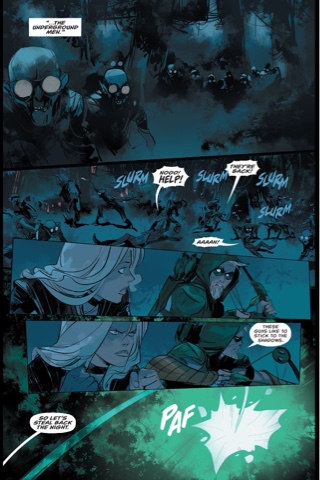 Black Canary and Green Arrow weren't made for one another, but when DC creators brought them together in the late Sixties, magic happened. And Percy and Schmidt beautifully tap into a vein that's been closed off for the last five years, since DC's New 52 revamp wiped out their relationship. Their fighting styles contrast and complement one another, they're challenged by one another's personalities - and they fancy the pants off each other.
The pair solve the immediate problem but threads from this issue will be ongoing - there's a big conspiracy out there, and there's nothing Green Arrow likes more than unraveling a big conspiracy. And as this one involves the likes of the Court of Owls from Batman, it should be a bit more colourful than Ollie Queen fighting City Hall.
Percy, who's been writing Green Arrow for awhile, continues to produce nicely worked prose, with this bit of narration showing what he can do. 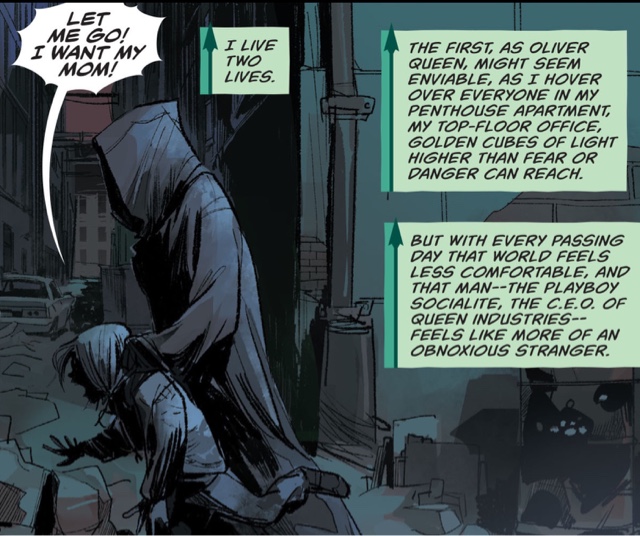 The only real off-note is Dinah's having a pop at Ollie over Roy... she's not an intimate of either and has no business acting as if she has any stake in what went down between them. 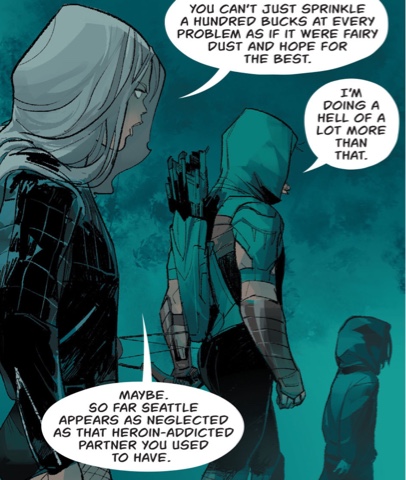 Dinah's earlier heavy-handed handling of the little boy, while uncharacteristically covered up, is also a little off but much less so, and makes for a nice dramatic reveal, with rain excusing the Time Trapper-style robes. 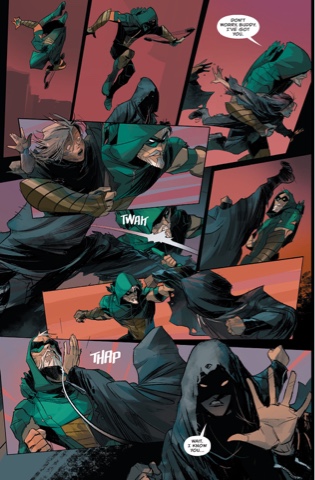 And Schmidt draws the heck out of it, with one of the best action scenes I've seen in awhile - the dynamism, the fluidity, it's lovely work. The Underground Men look somewhere between Dr Sivana and Nosferatu, making them very creepy, while his Dinah is like an old friend, recognisable as the recent star of her own series, but less the waif. I really like that she smiles so much around Ollie, it says a lot. And Ollie's look of respect, frustration and unexpected adoration is spot-on.
Both characters admit they're missing something - Dinah openly, Ollie to himself, and the final page, with a shared gesture and Dinah's final word, shows that these two need to be together.
Schmidt will share art duties on the new twice-monthly Green Arrow book with this issue's cover artist, Juan Ferreyra, who's just off a gorgeous run on Suicide Squad. I like the main cover, with Ollie staring right at us, ever the straight shooter. And would you look at that beard hair! The alternate cover by Steve Skroce and Alex Sinclair. Is super-slick, but I'm not keen on Dinah's face, she looks like a China doll.
Of all the DC Rebirth books this week, Green Arrow is my favourite. In a single issue, Percy and Schmidt have, organically and economically, brought back the Dinah and Ollie I love. DC should just change title to Green Arrow/Black Canary and have done with it.
Ben Percy Green Arrow Rebirth #1 Juan Fereyra Otto Schmidt