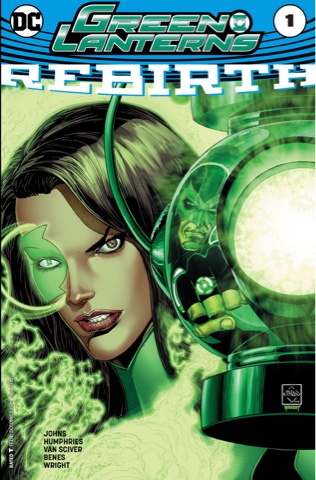 Green Lanterns are great. They have the ability to overcome great fear. A fantastic personality trait. Trouble is, the rest of their psyches are full of holes. There's Guy Gardner, arrogance personified. John Stewart, plagued by doubt. Hal Jordan, the space employee from hell...
And now here's Jessica Cruz, recovering fear addict, and bull in a china shop Simon Baz, co-starring in their own book.
This isn't so much a rebirth of two characters as a reintroduction. There's Jessica, who's been in the Justice League books for awhile, introduced organically and developed rather well by writer Geoff Johns. And another Johns creation, Simon, the Arab-American GL who debuted in a blaze of publicity, appeared in a few Green Lantern stories, hung around with a shortlived Justice League team and then... I have no idea. I stopped reading the GL books regularly ages ago - too many GLs, too many competing Corps and far too many annoying prophecies.
Wouldn't you know it, this smart script collaboration between Johns and Sam Humphries begins with a prophecy. There's this rogue Guardian - Ganthet, presumably, it's always Ganthet - who has a box containing a ring that emits the light of all the Crayola Corps. He's being chased by Dominators and the power of the ring escapes into the universe. 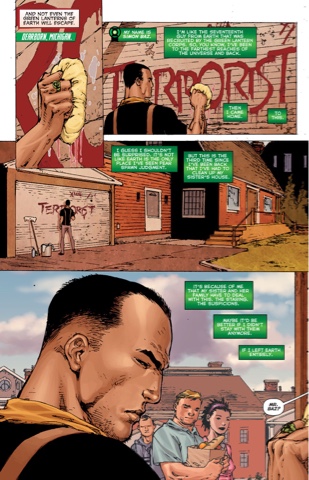 The unnamed narrator's voice fades, to be replaced by that of Simon Baz, in Michigan, who lets us see what his life has becomes; missions as Green Lantern alternating with cleaning up the graffiti of bigots who consider him the 'terrorist' Green Lantern. Since I've not read a solo story of him since his origin, I can't recall why - probably it's more to do with his wearing a ski mask and carrying a gun than his ethnicity.
I really, really hate the gun and it's nothing to do with assuming anyone is a terrorist - it's seeing a GL, whose unique weapon is a trinket, packing heat. 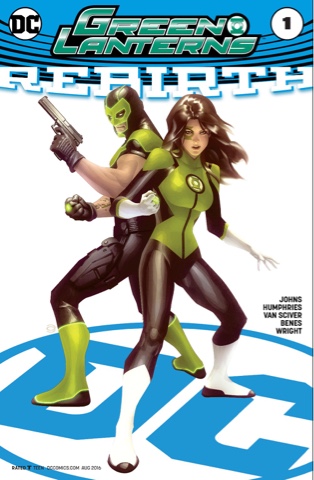 Just look at him on this gorgeously executed cover by Alex Garner, he looks like a grinning criminal. Happily, I don't see the gun or holster inside, maybe DC is quietly dropping the idea. I do hope so. The sinister mask should go too, it's not like he has a secret ID to protect.
Anyway, the government agent assigned to him after he stole a car loaded with explosives - hey, it could happen to anyone - turns up and tells him he's off the hook so long as he tells the authorities everything he knows about the GL Corps. Before he can give his reply, he's summoned by the ring. 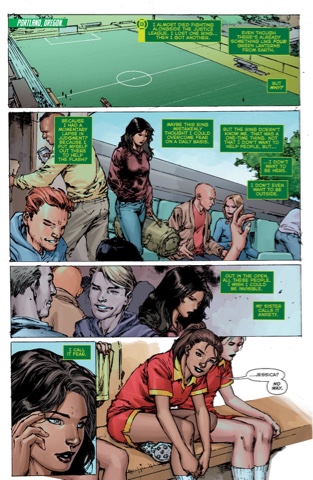 After Simon, the story shifts to Jessica in Oregon, whom we see is well and truly getting over her trauma-induced agoraphobia. She doesn't credit herself the way she should. Running into an old friend, she just has a chance to tell her she's now a Green Lantern before also being summoned by her ring.
In an echo of Hal Jordan's origin, they've been called to investigate an alien spacecraft that's landed on Earth. But instead of a friendly, dying alien, they find a Manhunter.
And Hal Jordan, who has not so much an offer for them as a direction. 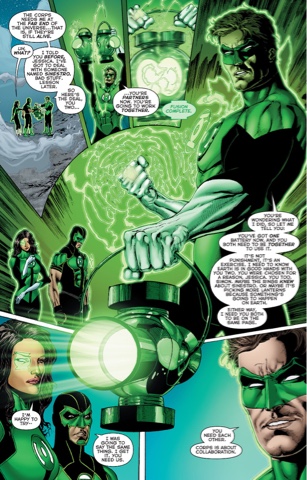 I must say, though, it's a bit rich Hal Jordan calling any other GLs out on their being less than perfect. I don't recall Simon or Jessica murdering thousands of Lanterns... And he has the cheek to tell them the Corps is all about collaboration? Mr Maverick himself?
Regardless, I like this set-up. So long as DC are giving Simon and Jessica a book rather than fan favourites John Stewart, Guy Gardner and Kyle Rayner, it may as well be a fun one, and the dynamic between the better-than-she-knows Jessica and Simon, a nice guy who becomes terribly aggressive when he powers up, could make for good drama. Maybe even a little humour... it's certainly fun seeing Jessica learn how to command her ring, whose chat at times makes it a bit of a Skeets 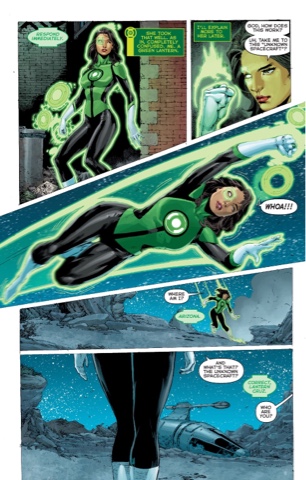 And finally, a female GL headlining a book. I would say how great it is that a Latino-American is sharing space with an Arab-American, but you know what? I'm tired of American Lanterns? Would it kill DC to make one of their, as Simon puts it, seventeen Earth Lanterns someone from outside the North American continent? We have personality problems too, y'know.
The art by illustrators Ethan Van Sciver and Ed Benes, and colourist Jason Wright, is rather great, a rather skeezy picture of Wonder Woman apart (Benes, I think). Neither Simon nor Jessica are identikit types, and the Lantern special effects are splendid. The storytelling is solid, with my favourite sequence being the opening encounter between Probably-Ganthet and the Dominators, one of my favourite alien races.
The end of the book unveils the mystery narrator and you may have heard me sighing from Scotland - him again? That apart, this is an enjoyable kick-off for the new Green Lanterns series, with enough going on to ensure I'll be back for the official first issue.
Ed Benes Ethan Van Sciver Geoff Johns Green Lanterns Rebirth #1 review Jason Wright Sam Humphries