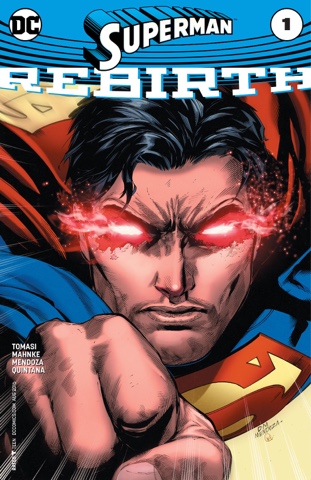 Superman is dead. At his tomb in Metropolis, another Superman waits. Below it, Lana Lang plans to take the remains of her friend, bury him in Smallville by his parents. When Lana is confronted by a familiar stranger, a plan is set in motion - bring a newly dead hero back to life.
I like Superman: Rebirth a lot. It goes exactly where the story should, pointing out that the pre-Flashpoint Superman, who migrated to this world after his own vanished, also died. And came back. So of course he expects his counterpart to return, if he can duplicate the process that brought him back after his own death at the fists of Doomsday. Writers Peter J Tomasi and Patrick Gleason use the meeting between Lana and Clark to reintroduce this Superman to readers who've not been following the excellent, just-closed Lois & Clark series, recapping his biggest battle and return. There's a bit of tension between Lana and Clark, but both are similar enough to their counterparts that an easy partnership soon forms. Clark doesn't tell her that Lois is here too, that they have a son, and Lana doesn't push - she would respect the privacy of her Clark and so trusts this one has his reasons to go light on the detail.
We're very much in a sci-fi landscape as the story shifts to the Fortress of Solitude but the characters have a real humanity. I love this insight into how she sees Clark; despite having shared wild adventures, he's still more the boy next door than the superhero. 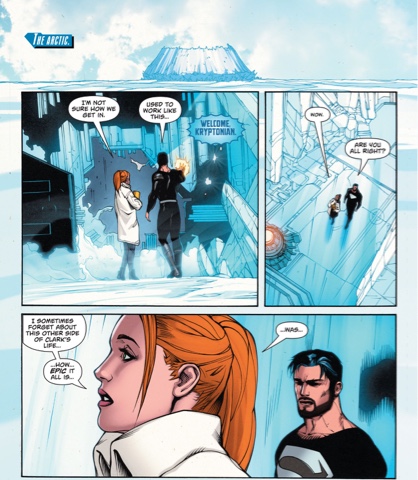 And when Clark sees a certain display of statues in his other self's Fortress, he has the same reaction many of us did when it made its debut a couple of months back, and sets up the final page. 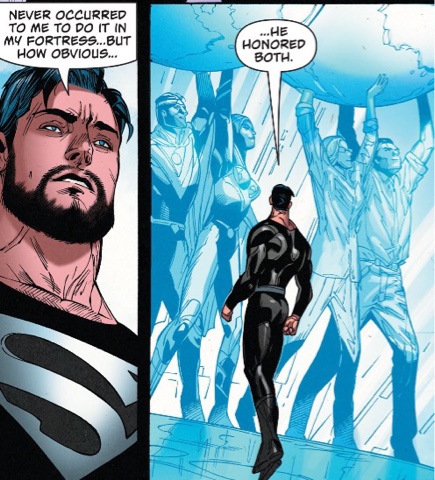 The pages by penciller Doug Mahnke, inker Jaime Mendoza and colourist Wil Quintana are beautiful, from the dynamic recreation of the Death of Superman sequence to the beginning of a friendship between Lana and Clark. The body language, the expressions, in their first encounter, for instance, is perfect. 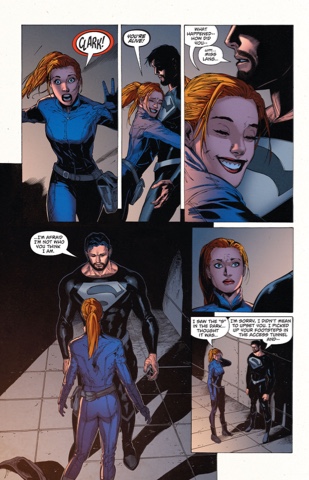 The artists' cover is nicely done - I think it's all close-ups for the DC Rebirth one-shots - but I'm not keen on the intensity of this Superman, the burning eyes is a cliche I associate with the New 52 Superman, and that guy is gone. There's a variant by Andy Park and while I like the concept - which again, seems to run through the line - the face isn't Superman, and the shiny costume is off-putting. It's well done, but not for me
So does New 52 Clark return? You can probably guess that the answer is 'no', most likely a 'not yet'. So far as the older, bearded Clark is concerned, his counterpart is not coming back, but he's darn well going to honour his legacy by stepping up and being, once more, a Superman for the world. He's stepping out of the shadows and I'll be with him every step of the way.
Andy Park Doug Mahnke Jaime Mendoza Patrick Gleason Pete J Tomasi Superman Rebirth: #1 review Wil Quintana