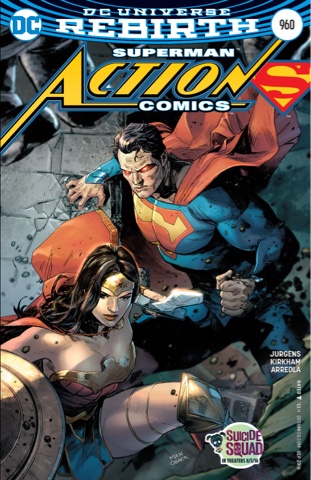 It's the battle of Metropolis, Superman and Lex Luthor vs Doomsday. Upstate. Lois, with son Jon at her side, watches Clark emerge from the site of an explosion to resume his fight with the unstoppable monster. Wonder Woman appears, joins the battle and meets the man claiming to be Clark Kent. She, reasonably, assumes he's been put in place by Superman to help him reclaim a secret identity, something Superman denies.
Superman explains the nature of Doomsday - a constantly evolving killing machine - to Diana and Lex and when the beast vanishes, Superman surmises that he's sniffed out another person with Kryptonian DNA - Jon...
There's more to the story than that but I shall let you discover it for yourself - you'll like it! Well, you will if you're anything like me - you'll enjoy the easy teaming of the New 52 Wonder Woman with a version of the man she loved, a man she recently watched die. You'll like the intelligence of Lois and her determination to protect Jon. Superman remembering that he needs to be fighting Doomsday somewhere away from ordinary citizens. A new aspect of Jon's Kryptonian heritage emerging. And most of all, you'll love this scene.

Not everyone will be a fan. Some people liked the Clark/Diana romance and that's fair enough. Me, though, I'm delighted to see that even Wonder Woman recognises the rightness of Lois and Clark for one another. And I'm thrilled that Lois and Diana's first instinct towards one another is friendship.

Writer Dan Jurgens also gives us a couple of panels of the mysterious Mr Oz, watching the fight from afar and commenting upon events. The fact he can be surprised by the presence of the non-powered Clark Kent tell us he's not omniscient, likely not from the future. The common theory is that he's OZymandius from Watchmen, which makes sense, but by gum, he doesn't half remind me of this guy... 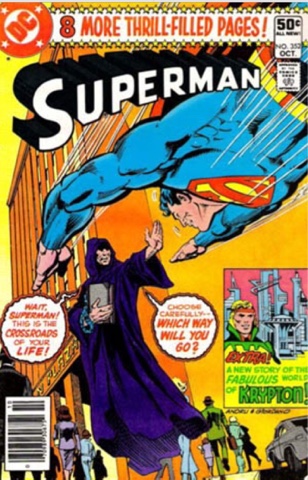 Destiny of the Endless, who before he was a big-time favourite of Neil Gaiman was a humble horror comic host who once guest starred in Superman. That's Destiny, Greek name, Potmos... which could by misheard as PotmOZ - hey, stranger things have happened. And his being surprised by un-Super Clark means nothing, his Cosmic Log was always getting stuff wrong.
I'm not putting this forward as a serious theory, I was just struck by the fantastic image by illustrator Tyler Kirkham and colourist Ulises Arreola. The rest of their art is less painterly, but rather nice nonetheless, with the fight scenes especially effective - they're big and daft and loud as you please.
Jurgens doesn't wrap the story here, ending on another Doomsday cliffhanger, but I'm nowhere near bored - the action, emotion and mystery of this book has me well and truly grabbed. 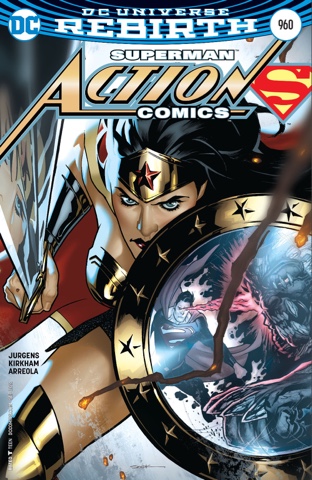 Digital readers get two covers, the excellent regular by artist Clay Mann and colourist Sonia Oback, with Diana showing off one powerful leg, and the variant by Ryan Sook, which is eye-poppingly lovely. A shout-out, too, to lettering stalwart Rob Leigh for showing just how much drama you can eke out of a well-chosen font.
I'm loving the fortnightly Supeman books, and this is one of the best yet. It feels...true.
Action Comics #960 review Clay Man Dan Jurgen DC Rebirth Rob Leigh Ryan Sook Sonia Oback Tyler Kirkham Ulises Arreola