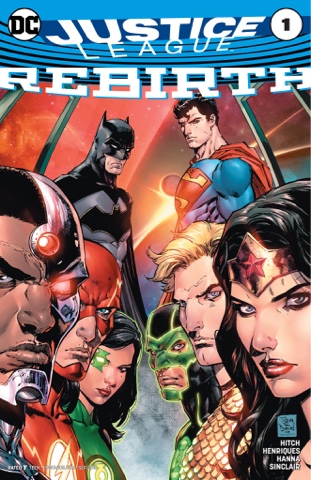 New York is being destroyed by a space cockroach. A bug so massive that the tiniest part of a tentacle can bring a skyscraper crashing to the ground. 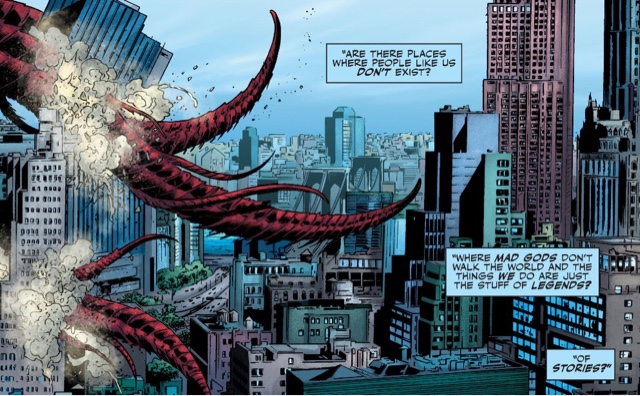 It's spewing forth mini-mes that attach themselves to humans and enslave them. And the Justice League really don't know how to beat this thing - Cyborg tries his boom tubes, Wonder Woman her Olympian weapons, Aquaman his trident.... 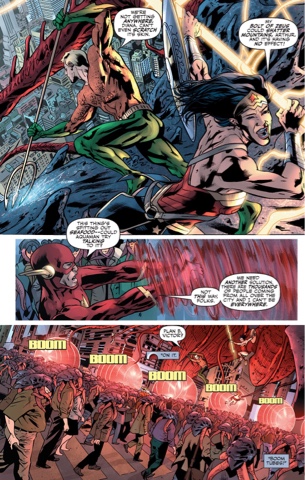 OK, that last one was never going to do much good, but the League are doing their best. It doesn't help that they're currently underpowered, their Superman having just died. And wherever Green Lantern Hal Jordan is, he's not with them.
There is another Superman around. 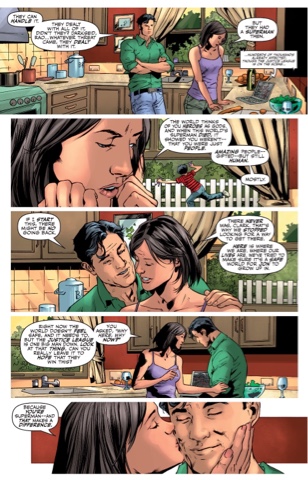 And Green Lanterns are pretty much ten a penny on Earth these days. 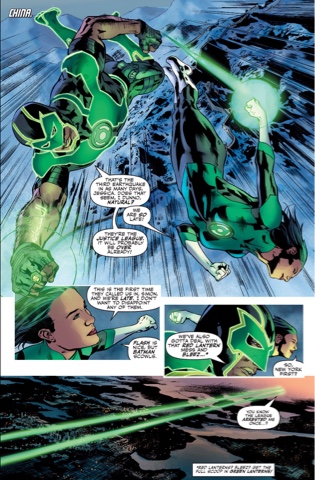 Aquaman, Wonder Woman, Cyborg, Batman and Flash are pleased when they come on board, but will they be enough?
When you see Bryan Hitch's name on a Justice League book, it's a safe bet we're going to go big, and that's exactly where the writer/penciller goes. This menace is so massive that the League really do look to be in trouble. Post-911 I still get uncomfortable seeing tower blocks crumbling with people inside, it makes things feel a little too real - and that makes for a big problem when we switch to the bucolic Kent farm (nice to see Jon Kent is fine with a Diana doll). I could go with the idea that pre-Flashpoint Superman operated solo on the downlow when his counterpart on this Earth was around, but now he's the only Supeman the world has. And yes, Lois is making that very point, but she's making it while her husband is literally watching thousands die on a tablet screen. Move, you dolt!
This has to be the last time we get such a scene, but Action Comics already being underway with Superman operating openly, I could have done without this one.
That's a biggish negative. My quibble is that this alien - the Reaper - is totally nicking Starro's schtick, using face-huggers to take over Earthlings. Get yet own gimmick, Mega-Cockroach. Seriously, it's an odd choice for Hitch to make, even referencing Starro as a by-the-by - this is a Justice League book, you can use Starro... just say he's grown a tad. Actually, maybe this is the post-Flashpoint version of Starro - I do hope not, as you can't beat a humungous starfish with creepy eyes.
Overall, I enjoyed this issue loads. Hitch nails the drama and gives each hero a spotlight moment of character or action. Hitch doesn't get enough credit for his writing, he does a great job with character voices and nuggets of appropriate humour. The contemplative opening narration by Superman has just the right tone. There's set-up here for a truly League-level threat, and I hope it's not left hanging in months to come.
Hitch's cinematic storytelling is terrific - the opening three pages leading to the arrival of the League could be taught at the Kubert School - but it tends to lead to delays. Once the regular title kicks off - I believe it's a fortnightly - Tony S Daniel will be drawing, so that should help it hit the schedule. With this one-shot Hitch has had time to produce lively compositions that complement his words. I'd love to see Hitch the writer teamed up with Hitch the artist fortnightly but that's never going to happen, so I'll enjoy his illustrative work when it does appear. I'm used to Hitch inked by the likes of fellow Brits Paul Neary and Mark Farmer, but Daniel Henriques and Scott Hanna keep the quality high. I suspect the former does the bulk of the issue, and the latter handles the Kent farm scenes. Whatever the case, they ensure the art has extra impact.
Alex Sinclair's colours are as attractive as ever - he's a master of indicating light sources and matching tones to mood -  while letterer Richard Starkings, another UK veteran, makes a rare DC appearance. Daniel's cover, with colours by Tomeu Morey, is a tad grim, but heck, this is hardly a whimsical issue. 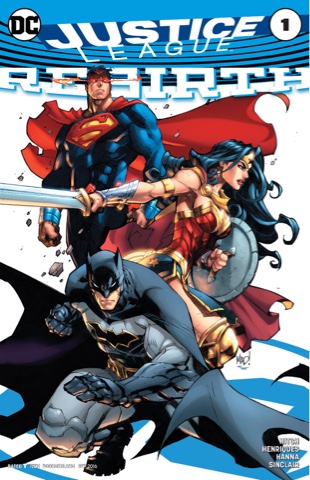 There's a variant by Joe Madureira and, if I'm interpreting the part-signature correctly, Sinclair, which has a lot of dynamism - it's a shame we have sword-slingy Diana and red-eyed Superman, that's all too New 52 for me. And why just the Big Three? The credits page believes Yanick Paquette and Nathan Fairbairn are on variant duty here - did someone commission one Trinity alternate image too many?
Editors Brian Cunningham and Amedeo Turturro deserve credit for wrangling the talent and giving us a Justice League book that has me itching for more. This was my first New Comics Day read and if the rest of the books are as good, it's going to be a great day.
Alex Sinclair Amedeo Turturro Brian Cunningham Bryan Hitch Daniel Henriques Joe Madureira Justice League Rebirth #1 review. Richard Starkings Scott Hanna