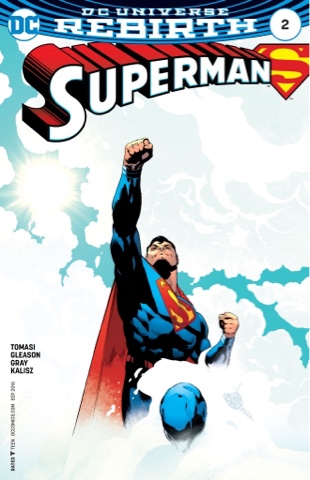 Jon Smith is scared. His Dad spotted him spying on his meeting with Batman and Wonder Woman at the family farm, appeared in his bedroom and demanded he come with him... and now they're in the middle of a frozen sea in, let's say, Alaska. But he needn't have worried, his father isn't angry - he wants a team-up!
Jon is on light duties, there to learn as Superman frees a submarine stuck in ice. And he begins to relax, and enjoy himself, and then... 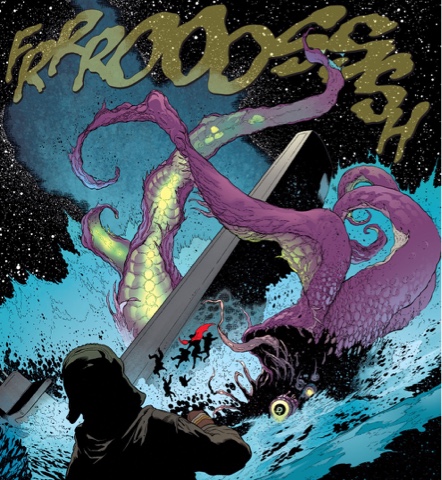 Whoa!
Superman asks his super-son to try using his heat vision, not knowing Jon is terrified of it, having accidentally killed his mother's cat, Goldie, while trying to save it from a hawk earlier that day.
There's a bump in the road, but the pair defuse the threat of the giant octopus and have a chance to breathe. 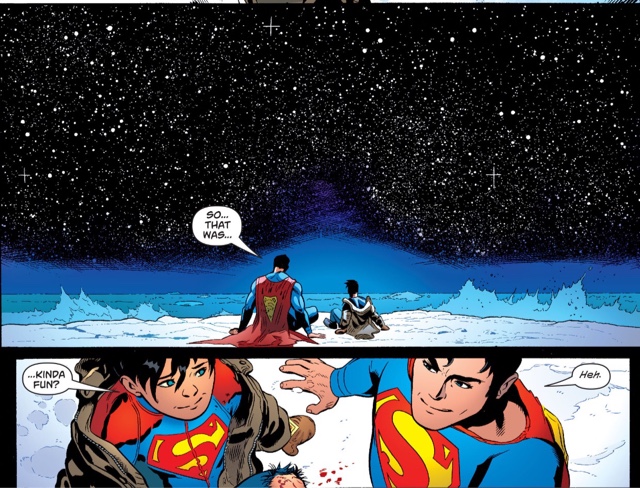 Back at the farm, Clark and Lois discuss their son's growing powers and how the heck they're going to keep him safe. Jon, meanwhile, is getting to know his neighbour Kathy, who saw him use his heat vision the previous day. Jon and Kathy, sitting in a tree...

Ouch.
Elsewhere, something collects a few drops of blood that fell from Jon's knee during his first official adventure. It uses the Kryptonian-Earthling plasma to grow itself into something new. Something shady.
OK, I'm not saying it, in case you've yet to read this issue - but if you were around in the Nineties, or have been paying attention to recent Superman stories, you'll have guessed who shows up on the final page. And their return gives me a kick, more than I would've imagined.
I guess I'm in a good mood because writer Peter J Tomasi, penciller Patrick Gleason, inker Mick Gray and colourist John Kalisz are getting so much right with this book. Having teased us with Jon's perspective last issue, with him fearing his father and the Justice League visitors, Tomasi quickly flips things around, assures us all is well. It's pretty wonderful to see Superman and son fighting a giant beast - one which isn't as simple as it first seems. Watching Jon forced to use the heat vision that's so alarmed him, gain knowledge of how to control it, is heartening. And seeing him almost immediately have another super-powered 'incident', this time involving his strength, well that's just fun.
OK, Jon does hurt himself, but he'll be OK, and it does give us a look at a Superman who is himself not always in perfect control of himself.
Of all the great moments this issue, this one is the best. 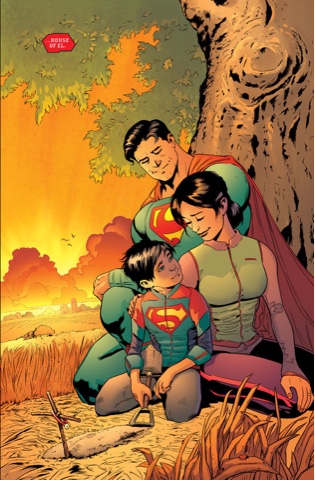 Rest in peace, Goldie. Let us know if Ranger is under there too...
Seriously, what has happened to Jon's dog, he's been neither seen nor heard in this book? And I bet master storytellers Gleason and Gray would make the mutt adorable - everyone in this book is adorable, even the octopus. 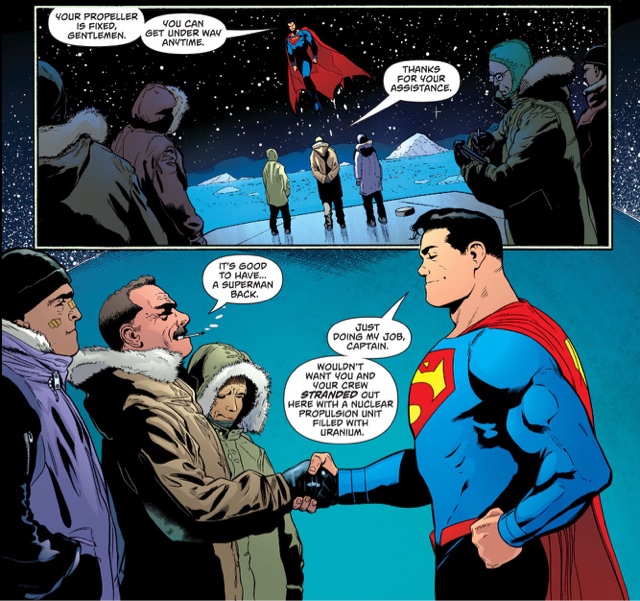 I love Superman's snub-nose, it gives him a charming old school quality. The only thing I'd tweak would be Lois' massive eyes, she's being drawn in a slightly different style, like a China doll, and it's jarring.

The colours of Kalisz are, as always, spot-on - autumnal warmth for the farm scenes: cool, then searing hot for Alaska... and it's literally brilliant to see the bright tones of the super-costumes back after the dark years of the New 52. Rob Leigh handles the script as sensitively as ever, varying font sizes and weights to match the moment, whether big or small. Every page is gorgeous, almost edible without subtracting from the drama.
The art team also provide the gloriously cloudy cover, while Kenneth Rocafort is on variant duties. 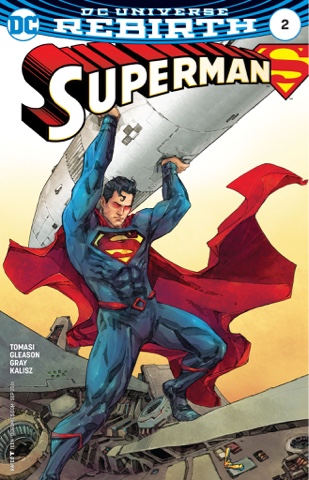 Last issue was heading for an A grade but was derailed by scenes of pet destruction, but this one? Just joyous.
John Kalisz Kenneth Rocafort Mick Gray Patrick Gleason Peter J Tomasi Rob Leigh Superman #2 review