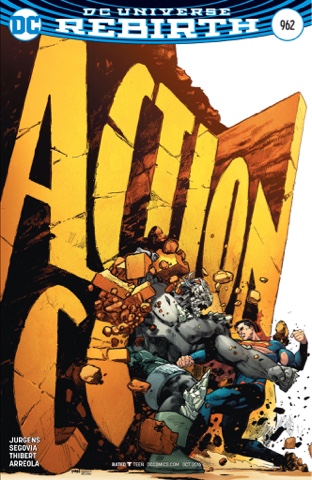 And just as it risks going on too long, Superman's battle against Doomsday concludes. After several issues of back and forth, with Superman perturbed to find this Doomsday can think strategically, I was beginning to wonder how things would end. But end they do, as Superman lures the monster to his Fortress of Solitude. 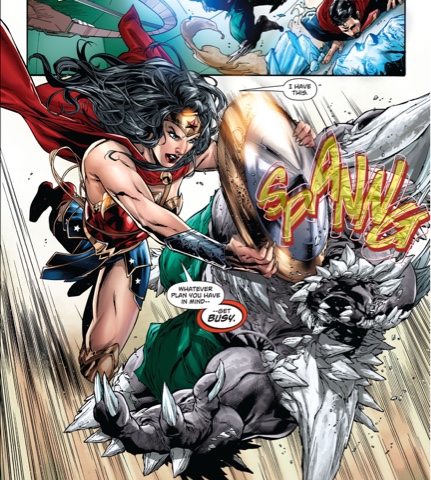 For a while Superman has the upper hand, but it becomes evident he can't best Doomsday alone. Thankfully, Wonder Woman arrives and buys the time he needs to enact a plan - he'd asked her to watch over Lois and Jon in the Justice League satellite, but Lois realised Diana could do more good by her husband's side.
After the team-up, there's a nice moment underlining the relationship of Superman and Wonder Woman going forward - there'll be no sexual tension between these two, 'just' friendship. 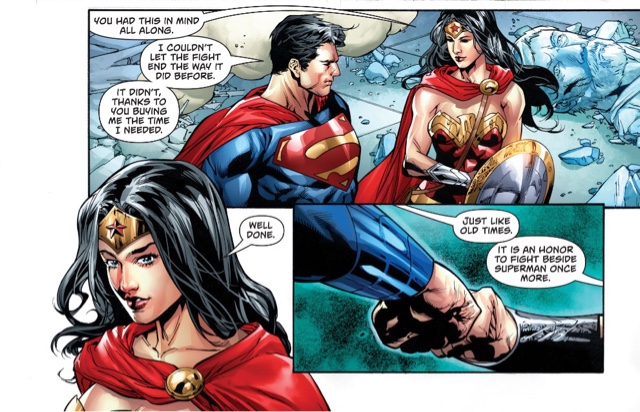 The reunion scene with Lois and Jon - overexcited at being in space - is equally good, especially this exchange. 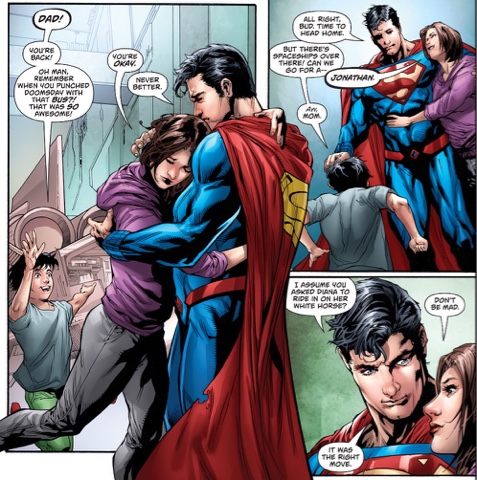 Dan Jurgens really knows how to write convincing relationships. And his solo Superman moments capture the classic hero - he's constantly thinking about others, the victims of Doomsday.
As for Doomsday, he's out of Superman's hair forever - or not. The mysterious Mr Oz, who has somehow been spying on everyone since the start of this storyline, has other plans.

I have to admit, this guy has me confused; ages ago he spoke about having trained Superman, at the start of this issue he wants to see what the hero is capable of, and by the end it seems control of Doomsday was his goal all along. As I've said previously, I hope Mr Oz is dealt with soon, as I'm not keen on mysterious types with mysteriously flexible agendas. Watch him turn out to be the 2016 version of the Robot Teacher From Krypton...
This issue also has Superman and Lex Luthor having a chat. Luthor has acted heroically throughout the fight with Doomsday, latterly doing a fine job with evacuation and rescue work. Superman risked everything to stop the creature. And yet neither is willing to trust the other - for the time being, they'll be uneasy allies. 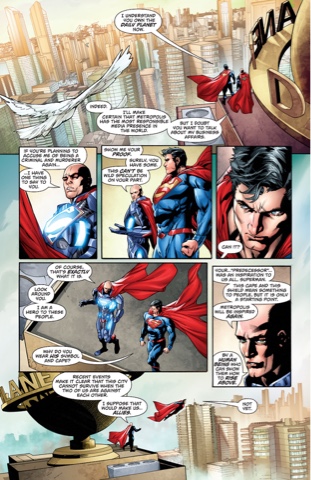 The apparently powerless extra Clark Kent is also around, but his deal is at the core of next issue, and I cannot wait to find out more about him.
Jurgens is doing a tremendous job juggling mysteries, Action Comics has been hugely consistent over its first few fortnightly issues. And Stephen Segovia, one of the rotating pencillers, acquits himself well, with dynamic layouts that power us through the story. It helps that veteran inker Art Thibert is on board to add his own brand of sharpness. One or two of the fight scenes with Doomsday are a tiny bit tough to parse, but I've always found that with the monster - all those spikes and rough planes make him difficult to get a visual grip on.
The colours of Ulises Areola have the necessary pop, while letterer Rob Leigh makes me smile with his Lois caption boxes. 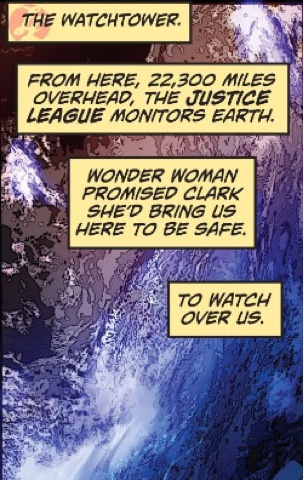 The variant cover by artist Gary Frank and colourist Brad Anderson is well executed, but a bit too similar in subject and tone to ones we've seen throughout this storyline. 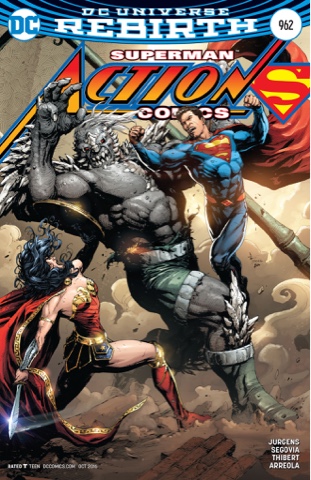