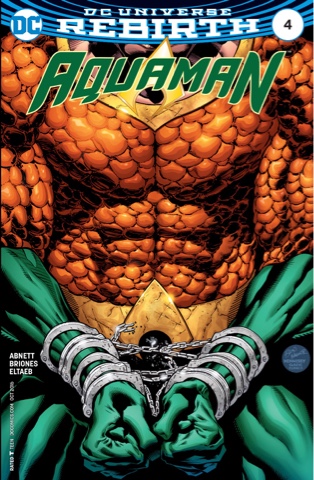 Arthur has allowed himself to be taken into custody by the US Government after apparent attacks by Atlantis on the surface world. Mera is in the White House, trying to be patient as the President fails to show up to talk to her. Tula is in Atlantis, finding that being regent in the absence of Aquaman is a tough gig. Head of the Atlantean Army Murk is in the South Atlantic, investigating the murders of everyone on a US Navy ship. And in a shielded jet, Black Manta is amused by the attempts of the woman named Black Jack to recruit him for something named N.E.M.O.
Writer Dan Abnett goes back and forth between the scenes, building the big picture as he builds character. Arthur and Mera are as beautifully bonded as ever, Murk is a little more nuanced than usual, Manta almost likeable, but it's Tula who really grows in this one. 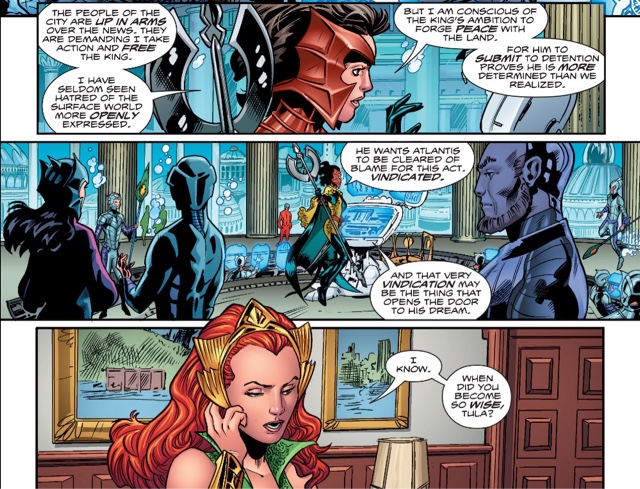 The young warrior entrusted with massive responsibility is wary of the challenge, but she's meeting it. 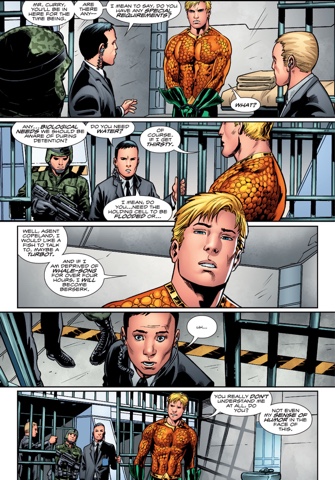 Arthur's opening scene with Agent Copeland is amusing, but there's really no need for him to be this snitty - the man is only trying to look after him while he's in custody. Mera, meanwhile, is dealing with White House Chief of Staff Gantry, who's laying down the law so far as Atlantis' place in the world is concerned. 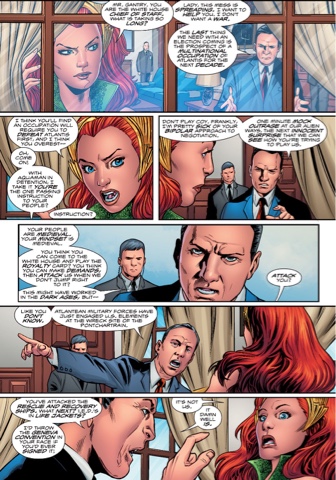 The masterful dialogue makes it difficult not to empathise with his position - why should he believe Atlantis hasn't authorised the recent attacks when it's not long since the kingdom tried to ravage the surface world? Sure, Arthur wasn't ruling then, but suspicion is inevitable.
Seeing Murk actually have a little sympathy for the dead US sailors is certainly a step forward for the hardliner, even better is learning that he has some detective instincts.
And then there's Manta, taking the piss out of Black Jack, who makes some rather deluded-seeming claims right after this exchange. 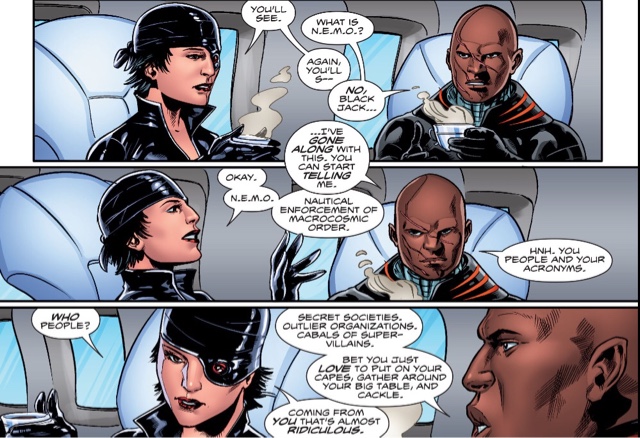 Abnett is writing a terrific blend of superhero soap and geopolitical drama (The West Fin?) as the fortnightly publication schedule gives his scripts room to breathe; characters and situations are becoming richer as he finds his rhythm.
And it isn't all (extremely entertaining) talk - Abnett throws in some action moments as the US Navy finds Murk and his warriors at the scene of slaughter, and someone's patience finally runs out.
In Philippe Briones, Abnett has an artist with storytelling chops who also excels at expressions, such as when he's asked to depict Aquaman getting a bit snotty, or Tula's changing moods. 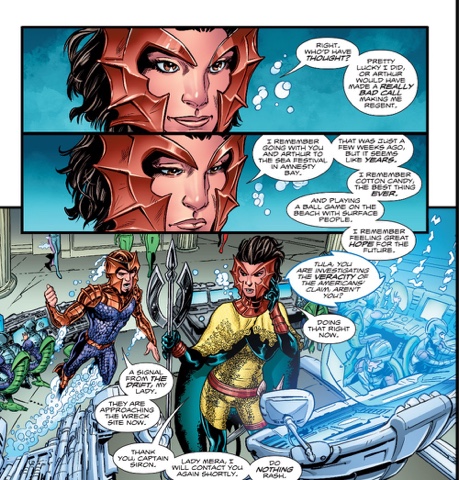 And I really like the latter's Regent look, with those nattily fussy sleeves and the cape that likely looks great when she's swimming. I appreciate Briones bothering to show that people underwater don't move the same way we do, the buzz of Tula's control room is palpable and good grief, he even takes the time to draw antimacassars on the White House settees. Gabe Eltaeb's colours bring something extra to the party too, with his lighting of the South Atlantic scenes, and a panel of Mera using her powers, especially nice. Pat Brosseau's wonderfully neat letters are also worth mentioning. 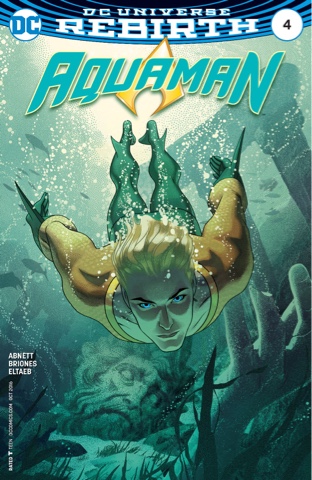 As for the covers, both are grabbers. Series co-artist Brad Walker's multi-cuffed Aquaman - inked by Drew Hennessey and coloured by Eltaeb - is smartly conceived and sharply executed, while Joshua Middleton's dreamily beautiful variant is like some lost pulp cover.
Four issues in, the new Aquaman book is an unmissable treat... is a weekly too much to hope for?
Aquaman #4 review Black Manta Brad Walker Dan Abnett DC Rebirth Drew Hennessey Gabe Eltaeb Mera Pat Brosseau Philippe Briones